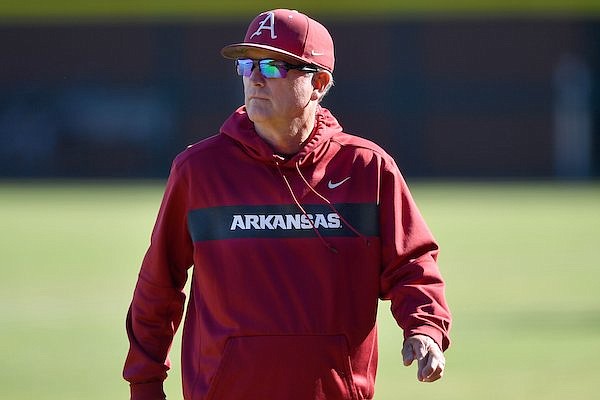 Arkansas coach Dave Van Horn walks back to the dugout Thursday, Oct. 13, 2022, before the start of play against the Texas Rangers Instructional League team at Baum-Walker Stadium in Fayetteville.

FAYETTEVILLE — There have been some modifications to Arkansas’ 2023 baseball schedule this month.

TV plans for the 2023 season have yet to be announced.

Arkansas now has four SEC series that are scheduled to begin on Thursday in 2023. The April 6-8 series at Ole Miss will not have a Sunday game due to the Easter holiday, and the May 18-20 series at Vanderbilt is on the final weekend of the regular season when all SEC teams begin their series on Thursday in preparation for the following week’s SEC Tournament.

In addition to the change in SEC dates, the Razorbacks will play only one game against Army at Baum-Walker Stadium on March 7. The teams were originally scheduled to play two games from March 7-8.

With the reduction of the second Army game, Arkansas has 55 dates scheduled for 2023. The NCAA allows teams to schedule up to 56 games.

The Razorbacks are scheduled to open the season with a game against Texas on Feb. 17 at the College Baseball Showdown in Arlington, Texas.