Not perfect, but a great battle looms in Fayetteville 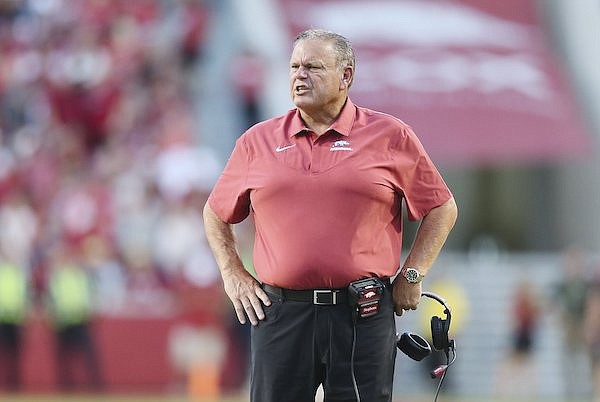 Arkansas coach Sam Pittman is shown during a game against Missouri State on Saturday, Sept. 17, 2022, in Fayetteville.

Unfortunately Arkansas didn’t uphold its end of the bargain.

While Alabama rolled Vanderbilt 55-3 in Tuscaloosa, Ala., last Saturday to improve to 4-0, the now 3-1, 20th-ranked Razorbacks lost 23-21 to Texas A&M despite statistically dominating the Aggies at the Dallas Cowboys’ AT&T Stadium.

Arkansas fans know all too well that the Hogs perched on the verge of taking a 21-7 halftime lead when quarterback KJ Jefferson’s first-and-goal run was fumbled and returned by the Aggies for a touchdown.

Only a botched PAT snap enabled the stunned Hogs to lead 14-13 at half, but couldn’t prevent Arkansas’ third quarter funk, trailing 23-14.

The Razorbacks, mostly resilient since Sam Pittman’s 2020 arrival as head coach, rallied in the fourth quarter. They cut it to 23-21 and barely missed their winning chance. Cam Little’s 42-yard field goal attempt hit the right upright and dropped on the wrong side of the cross bar.

So now the CBS eye mostly spotlights Alabama which has won 15 consecutive over Arkansas in their annual SEC West game. The Las Vegas odds, Alabama by 19 at midweek, reflect the Razorbacks’ reduced role.

Strange about momentum. Pittman’s 2021 Hogs were 4-0 and had beaten No. 15 Texas and No. 7 Texas A&M when they were ballyhooed to give 5-0 Georgia trouble in Athens, Ga.

Those eventual 9-4 Hogs would not be routed again, including closing fast on the Tide in a 42-35 loss in Tuscaloosa.

Contrast that to the 52-3 flogging in Fayetteville that Alabama’s national champions administered on Pittman’s 2020 Hogs.

With six national championships in Coach Nick Saban’s Alabama tenure, the Tide has routed many but also had to fight to the finish

“Alabama can beat you before you ever run out on the field,” Pittman said of the Tide’s mystique and talent to back it up.

But that so many on this year’s Arkansas team last year had the Tide in Tuscaloosa hanging on rather than rolling at the end maybe factors today.

“I think what happens when you play somebody close you start having some belief,” Pittman said, “We’ve got a pretty good team and you have a chance to win the game. Certainly that’s where we’re at now with our football team.”

They showed that vs. A&M, even as the fourth-quarter comeback fell short.

Saban’s Tide teems as talented and well-coached as ever, but Pittman builds the Hogs ever closer in talent and belief.

CBS won’t get its battle of unbeatens, but still could air a mighty good football game.