3rd downs a pain for Hogs 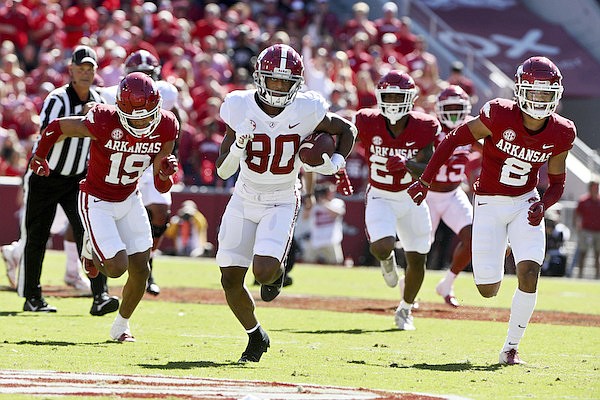 Alabama receiver Kobe Prentice (80) breaks away from Arkansas defenders, Khari Johnson (19), Chris Paul Jr. (27) and Myles Slusher (2) on his way to score a touchdown during the first half of an NCAA college football game Saturday, Oct. 1, 2022, in Fayetteville. (AP Photo/Michael Woods)

FAYETTEVILLE — Too many third-down plays went Alabama’s way on Saturday at Reynolds Razorback Stadium for the University of Arkansas to have a shot at pulling an upset.

“It’s bad,” Arkansas Coach Sam Pittman said. “You sit there and think you’re going to get off [the field], then they make a play.

“It’s very deflating. But that’s part of the game. It’s happening too often to us. We’ve got to figure out how to get off the field when we have an advantage with the sticks.”

Alabama gained 225 yards on third down, including a 47-yard touchdown pass from Bryce Young — who suffered a shoulder injury in the second quarter and missed the rest of the game — to Kobe Prentice that put the Tide ahead 7-0.

A particularly damaging third-down conversion for Alabama came on backup quarterback Jalen Milroe’s 77-yard run early in the fourth quarter after Arkansas had pulled with 28-23 after trailing 28-0.

The Razorbacks looked ready to force a punt and get the ball back when Alabama faced third and 15 from its 20, but Milroe escaped from the pass rush and sprinted to the Arkansas 3 before being forced out of bounds by safety Khari Johnson.

The Tide scored two plays later on Jase McClellan’s 3-yard run to push their lead to 35-23 with 14:09 left to regain control of the game.

“We had a man blitz on, and about got to him, and he got outside of it, and then we couldn’t catch him,” Pittman said of Milroe’s run. “It was a great play by him but that certainly was a, woulda, coulda, all that.

“If we had got him down there it would have been interesting to see what happened because we did have all the momentum at that point.”

Arkansas senior linebacker Bumper Pool had a shot to make a tackle at the line of scrimmage, but Milroe eluded his diving attempt.

“Obviously on that play, I should have made it,” Pool said. “But we’ve just got to continue to work. We have to work and continue to get better at the things we’re not good at.

“But I was proud of the fight. We’re going to get back in there and emphasize third down and make sure that we continue to get better at it.”

Alabama’s first third-down play came when it needed 1 yard to make a first down at their 44 and Young fumbled a shotgun snap.

But instead of Arkansas getting a stop, running back Jase McClellan picked up the loose ball and ran 2 yards for a first down.

The play kept alive what turned into an 80-yard touchdown drive for Alabama that put it ahead 14-0.

Another key play for the Tide came on Milroe’s 22-yard touchdown pass to JoJo Earle on third and 18 to put Alabama ahead 28-0 with 2:51 left in the second quarter.

On the previous play, safety Latavious Brini broke up a pass intended for Earle, who was called for offensive interference.

If Arkansas had declined the penalty, Alabama would have faced fourth and 3 from the Arkansas 7.

Instead, Pittman accepted the penalty, giving Alabama another third-down play.

Pittman said he took the penalty because he believed Alabama Coach Nick Saban would keep his offense on the field and go for a touchdown if it had been fourth and 3.

“I thought we could hold him for less than 10 yards on third down,” Pittman said. “Get a turnover, whatever it may be.”

Pittman said he discussed his decision with the staff on their headsets.

“We all agreed that was the best thing,” Pittman said. “They throw a touchdown the next play.”

That’s the kind of game it was for Alabama on third down.