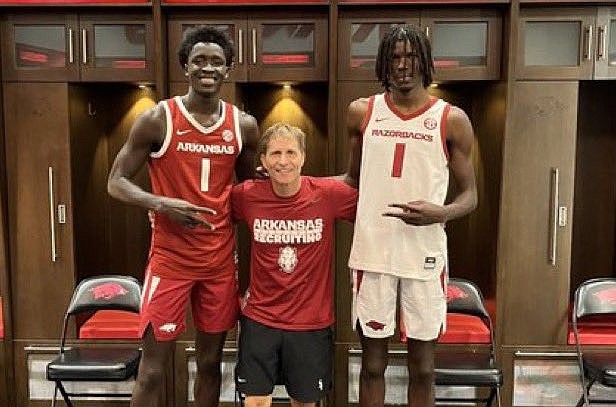 FAYETTEVILLE — Arkansas hosted top basketball recruits Baye Fall and Assane Diop for official visits, and they came away happy with their trip to Fayetteville.

“It was good, it was really good,” Fall said. “We enjoyed it. We went and watched practice, and when we first came we’ve seen the atmosphere here. You know, people going to restaurants and to the pep rallies and everything. It’s amazing.”

The cousins visited Arkansas in February and attended the basketball team's victory over Kentucky.

“It was good. We enjoyed it like always,” Diop said. “We came here last season and it was good, so that was enough and we thought we should make an official one. We enjoyed the visit. The fans were good and the coaches are every time. The players were good this time — every time, too.”

ESPN also rates Fall the No. 3 center nationally for the 2023 class and the No. 20 overall prospect. He has also officially visited Rutgers, Auburn and Seton Hall.

“I think I’m going to go back to Auburn, but I don’t know yet,” Fall said.

Diop is also rated the No. 10 power forward and No. 57 overall prospect in the 2023 class. He reports making official visits to Colorado and Seton Hall.

“This is my last one,” he said of Arkansas.

Fall and Diop played for the Colorado Hawks, a team ran by Fort Smith native Greg Willis. Former Razorbacks great Ron Brewer and Willis led Northside to a 30-0 season in 1974 and an overall state championship.

Willis and his wife accompanied Fall and Diop on the trip. Fall and Diop participated in the prestigious NBPA Top 100 camp in late June, and Fall was named to the 10-man All-Star team.

Fall was able to pick up more information on the Arkansas program over the weekend.

“Just more details about the program, how they do stuff,” Fall said. ”How they track details, the technology and some similarities of this program and to the NBA.”

"It makes me feel blessed to get recruited by people like this because they've got it all, really,” he said. “They have everything.”

Fall and Diop took in the Arkansas-Alabama football game, which highlighted the visit for Diop.

The Arkansas fans blew Diop away.

“I didn’t know it was like that,” he said. “Like, we went to the football game and this little kid had a sign saying, ‘We want Assane and Baye here.' That was huge, and we have some people taking our pictures. That was really huge.”

Musselman has produced several videos of himself as a techno DJ with various Razorbacks players dancing in the background. He and the players recreated it during the football game.

“I think it was cool, really funny,” Fall said. “He told us he was going to do that and then seeing it on the big screen, it was really funny with the guys in the back.”

Diop got a kick out of Musselman and the players doing the skit at the game.

“Coach Muss is like that,” Diop said. “He has high energy and all. We came here for the Kentucky game and we can see how high his energy is.”

Fall likes his relationship with Musselman and Arkansas' coaching staff.

“Really good. We’re pretty close,” Fall said. “A lot of them have seen me practice or play or at camps, and I’m familiar with them, so it’s just a good vibe.”

“Probably when I finish my last visit. I’m just going to go forward from there,” Fall said.