Hogs had Tide seeing red for a quarter 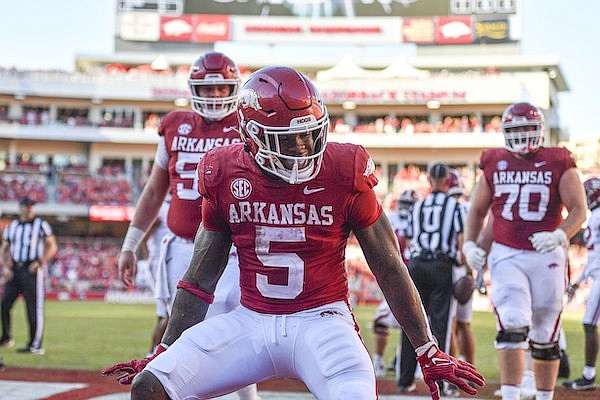 Arkansas running back Raheim Sanders (5) celebrates a touchdown during a game against Alabama on Saturday, Oct. 1, 2022, in Fayetteville.

FAYETTEVILLE — For a couple of exhilarating moments, the loud and proud crowd dared to keep the momentum that had swung, and an upset was in the making.

After trailing the No. 2 Alabama Crimson Tide 28-0, the No. 20 Arkansas Razorbacks scored 23 unanswered points and trailed by five as the third quarter ended.

Arkansas had dominated the third like it was Georgia playing Vanderbilt.

The Razorbacks had the ball more than 10 minutes, gained 141 yards of offense, while the Tide managed to lose a yard from its total offense, gained just one first down and allowed the Hogs 17 points in a little more than seven minutes.

The Hogs drove 78 yards for their second touchdown and after another long TV timeout lined up to kick it away, but kicker Jake Bates laid down a perfect onside kick.

He raced alongside the ball and recovered it himself at the Arkansas 46.

A ridiculous review upheld the Razorbacks’ possession and they drove 50 yards for a field goal, and that’s when it appeared the football gods were part of the “Red Out” crowd of 75,579.

There’s not a team in existence that wouldn’t miss the current Heisman Trophy winner, and by the time he got knocked out in the second quarter with an apparent shoulder injury, he had passed for 173 yards and a touchdown and run for another.

On fourth and eight from the Tide’s 27, the Bama punter couldn’t handle a hard snap and fell on the fumble at his own 3.

It took Raheim Sanders one play to score, and with 19 seconds to play in the third quarter it was 28-23. Arkansas was suddenly looking more like Alabama than the Crimson Tide.

Three plays swung the game back to Tuscaloosa time.

Three plays that accounted for 225 yards and 21 points.

Three plays that finally sent many of the faithful to the exits.

On third and 15 at the Alabama 20, backup quarterback Jalen Milroe broke for 77 yards to set up a touchdown two plays later.

Running back Jahmyr Gibbs got in the act with touchdown runs of 72 and 76 yards and with 6:55 left, the final score of 49-26 was in the record books.

That’s why Alabama is one of the best programs in the country: It has play makers, several of them, and the Razorbacks put a serious scare into the Tide before falling for the 16th consecutive time to Nick Saban.

Depth and speed were why Bama owned the first half.

A little more than three minutes separated the Razorbacks and Crimson Tide in time of possession in the first half, 16:36 for the visitors and 13:24 for the home team.

That was about the only statistic that was close, and Bama made the most of its time on the field.

They converted six of eight third downs and until Young left the game after falling hard on his shoulder when sacked, it was obvious which team had signed 17 five-star players the last four years.

On their final drive of the first half, the Razorbacks drove 75 yards on nine plays to cut Alabama’s lead to 28-7, and that gave the home team 149 yards of total offense for the first two quarters, just 8 more than they had in the third quarter.

It was the second time they drove into Bama territory. The first time they fumbled on first down.

For the half, the Hogs ran five plays on the Crimson Tide’s side of the field and converted one of six third downs.

Until that drive, the highlight for the Hogs came two minutes after the opening kickoff when Dwight McGlothern intercepted Young at the 1 to kill a four-play 56-yard drive.

Then came the encouraging third quarter.