Arkansas playing it safe with Jefferson 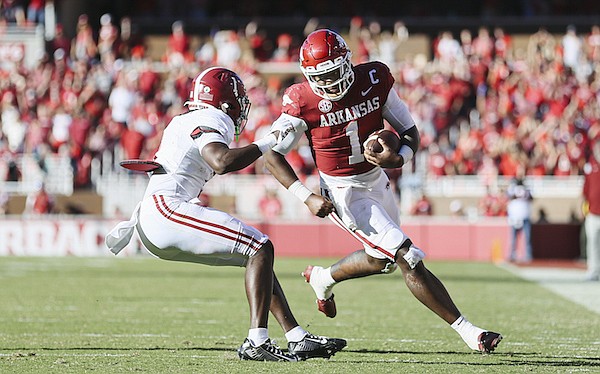 The Heisman Trophy winner Young had the CBS eye focused on him during and after his second-quarter exit with what Alabama Coach Nick Saban postgame called “a little AC sprain in his shoulder.”

Given Young’s prowess, it’s obvious why CBS telecasting the game plus media thereafter paid so much attention to Young’s absence after he overcame a first series interception to stake the Crimson Tide to a 21-0 lead of its eventual 28-7 first half.

No big deal, it seemed, when reserve Cade Fortin rather than Jefferson quarterbacked Arkansas’ final two series starting at 6:55 in the fourth quarter.

After third-quarter rallying to down just 28-23, the Hogs helplessly saw Alabama run away with the game in the fourth quarter. Down 49-26, it seemed natural that Coach Sam Pittman spare Jefferson from absorbing unnecessary contact with Arkansas needing to regroup for next Saturday’s SEC West game at Mississippi State.

Turns out Jefferson already had taken a too hard knock.

“He hit his head,” Pittman said postgame “I don’t know [medically] where he’s at to be honest with you. Obviously, we didn’t bring him back in. I don’t know any more than that.”

The Razorbacks, 3-2 overall and 1-2 in the SEC, desperately need their quarterback and captain Saturday in Starkville, Miss. against the 4-1, 1-1 Bulldogs, who are fresh off beating 42-24 the same Texas A&M Aggies that dropped Arkansas 23-21 the previous Saturday.

Yes, Arkansas needs Jefferson. But recent years throughout football studies noting too often those with head injuries were put back in games too soon with lingering effects puts his health first.

More than ever it seems after last week in the NFL.

Miami Dolphins and former Alabama quarterback Tua Tagovailoa stayed in the Sept. 24 game vs. Cincinnati after a few plays off evaluation from taking a blow to the head. Last Thursday vs. Buffalo, Tagovailoa was borne off the field on a stretcher and for a time hospitalized after again hitting his head on the turf.

Ensuing national controversy arguing that Tagovailoa shouldn’t have continued playing Sunday and should not have played Thursday reignites concussion alarms.

Expect Jefferson to be evaluated thoroughly and daily regarding his status for Saturday’s 11 a.m. Central game in Starkville.

Fortin, a senior transfer previously playing at North Carolina and the University of South Florida, and during the season promoted over junior returning backup quarterback Malik Hornsby, Pittman said, completed 4 of 10 passes for 35 yards and netted 9 yards on 1 carry for 2 series in a lost cause.

Obviously the Razorbacks stand a better chance Saturday in Starkville with the dual-threat quarterback who last season directed their 9-4 campaign.

But better taking their chances on their backup than chance the future of their shining star unless Jefferson passes stringent testing.