Playing from behind: Hogs trying to keep up with Tide 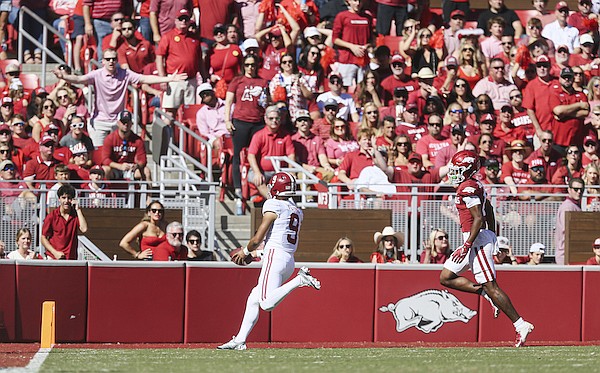 Alabama continued to make the Razorbacks play catch-up on Saturday when the No. 2 Crimson Tide beat the University of Arkansas 49-26.

“For whatever reason, we didn’t start well,” said Pittman, in his third season as Arkansas’ coach.

Arkansas hasn’t been ahead of Alabama since taking a 7-3 lead with 1:29 left in the second quarter on Drew Morgan’s 4-yard touchdown catch from Brandon Allen in 2015.

The Tide went ahead 10-7 in the third quarter on Jake Coker’s 81-yard touchdown pass to Calvin Ridley and pulled away to win 27-14 at Bryant-Denny Stadium.

Alabama, which moved up to No. 1 in The Associated Press Top 25 poll on Sunday, has now held a lead over Arkansas for 29 consecutive quarters.

“We try to ignore the score, if I’m being honest,” Razorbacks senior offensive tackle Dalton Wagner said. “Because if you start panicking, it only gets worse from there.

“You try to make throws that you’re not going to make or you start to try to really press and do something you’re not supposed to do.

“You’ve got to be yourself in a situation like that. You’ve got to go back to your core fundamentals of your toughness, physicality and your effort.

“I think, in the third quarter, that’s what we had to lean on the most because Coach called us out at halftime, pretty much. We had to be a tough team again.”

The Razorbacks scored on KJ Jefferson’s 6-yard pass to Ketron Jackson Jr. with 21 seconds left in the second quarter to cut Alabama’s halftime lead to 28-7.

Arkansas then scored 16 unanswered points in the third quarter and pulled within 28-23.

“Just proud that we fought back,” said junior linebacker Drew Sanders, a transfer from Alabama who led the Razorbacks with 12 tackles and had their only sack. “I think a lot of teams struggle to do that, especially against a team like Alabama.

“I think the way we did it, we definitely had some fight in us.”

Through the first four games Arkansas was outscored 41-13 in the third quarter.

“That drive right before halftime I think really was a good spark for us,” Wagner said. “We showed the tempo and the versatility of what we can do.”

The Razorbacks’ four captains — Jefferson, Wagner, linebacker Bumper Pool and safety Simeon Blair — talked to the team at halftime along with Pittman.

“We all got up there and spoke and said, ‘Listen, you know we’ve got a shot. We’ve got some things we can pull out in the second half,’ ” Pool said. “And honestly in the third quarter, that was some fight that you just love to see, especially for how hard we worked on it throughout the week.

“But we just didn’t get it done. We let too many plays break us.”

Pittman said the captains did a good job during halftime.

“To be honest with you, it was just a challenge to go play hard, show our character, who we are, what got us here,” Pittman said. “We had to make adjustments as a coaching staff, but they had to go out there and play hard and I thought they did.”

“We have no choice but to bounce back,” Wagner said. “It’s the SEC. You’re playing a top 25 team every week.

“When we get to the film on Monday, we’ll watch it probably two hours, put it to bed and then start another hour’s worth on Mississippi State. They’re a good football team and the team’s ready to get this taste out of our mouth.”

Pool said the Razorbacks are a resilient group.

“We’ve just got to stick together,” Pool said. “A lot of games left.

“Everyone in that locker room is hurting, but we’re not broke. We want to continue to get better, continue to work on the things that we didn’t do well.”

With Alabama leading 28-23 early in the fourth quarter, the Razorbacks were on the verge of getting the ball back with a chance to go ahead, but backup quarterback Jalen Milroe’s 77-yard run on a third-and-15 play from the Tide 20 set up a touchdown run by Jase McClellan.

Milroe played the entire second half after starting quarterback Bryce Young injured his shoulder in the second quarter.

“It stopped the bleeding for sure because that was third-and-long in bad field position,” Tide Coach Nick Saban said of Milroe’s scramble. “If we don’t make a first down there … That was a huge momentum swing in the game in my opinion. After that, we played better. After that, I think they didn’t play as well.”

Alabama outscored Arkansas 21-3 in the fourth quarter — including touchdown runs of 72 and 76 yards by Jahmyr Gibbs — to regain control after the Razorbacks had fought so hard to get back in it.

“Against a good team like that, you’re down 28-7 at half, it’s hard to dig out of that hole,” Wagner said. “We were that close to digging out of it. We’ve just got to find a way to finish it.”