Arkansas to host Tennessee as part of revised baseball schedule 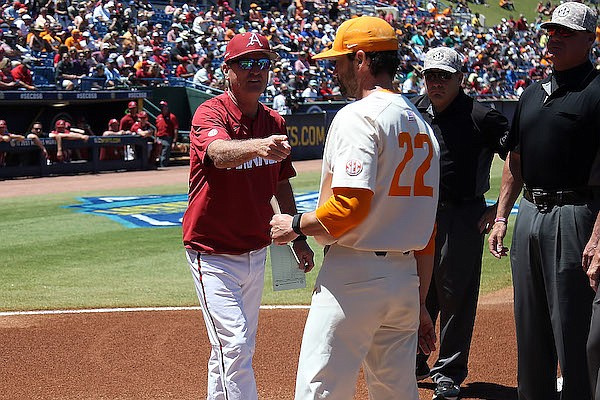 Arkansas coach Dave Van Horn (left) and Tennessee coach Tony Vitello exchange lineup cards prior to the championship game of the SEC Tournament on Sunday, May 30, 2021, in Hoover, Ala. (SEC Pool Photo)

FAYETTEVILLE — Arkansas will host a baseball series against Tennessee in April, the SEC announced Tuesday.

The April 14-16 series at Baum-Walker Stadium was added to the 2023 schedule after the SEC realized an error in the initial schedule it released Sept. 14. The league recalled the schedule two days later to remove cross-divisional series that were announced for 2023, but were not meant to be played until 2024.

Arkansas and Tennessee have not played since the championship game at the 2021 SEC Tournament, which the Razorbacks won 7-2. Arkansas also won a tightly contested series at Tennessee that year in which all three games were decided by one run.

The Volunteers played in the College World Series in 2021 and the Razorbacks reached the national semifinals this year before a loss to national champion Ole Miss. The teams have been the past two No. 1 overall seeds in the NCAA Tournament when both were eliminated from a home super regional — Arkansas to North Carolina State in 2021 and Tennessee to Notre Dame earlier this year.

Tennessee will be playing its first series at Arkansas since the Razorbacks swept the Vols in 2019.

Most of the Razorbacks’ SEC schedule changed due to the error. Missouri, which was initially announced last month as one of Arkansas’ 2023 opponents, fell off the schedule because the Tigers and Razorbacks are not supposed to play again until a 2024 series in Fayetteville.

Arkansas will open SEC play with a series against Auburn at home and will play its first road SEC series the following week at LSU. The Auburn series will be a rematch from last season's College World Series, where the Razorbacks eliminated the Tigers with an 11-1 victory.

Arkansas will get another CWS rematch with Ole Miss on April 6-8 in Oxford, Miss. That series will be played Easter Weekend and will begin on a Thursday.

Arkansas is scheduled to open the season with three games at the College Baseball Showdown. The Razorbacks will play Oklahoma State, Texas and TCU at the event, but an order of games has not been announced.

* — College Baseball Showdown in Arlington, Texas; order to be determined.