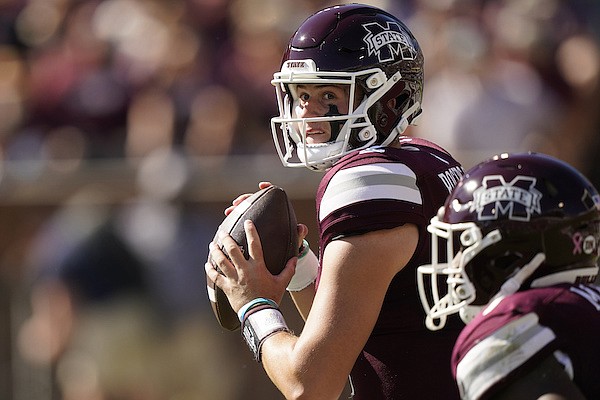 FAYETTEVILLE — The red zone has been a productive place for Mississippi State.

When the No. 23 Bulldogs have moved inside the opponents’ 20-yard line, they’re scored on 16 of 17 opportunities.

“Put it in play. Make sure the ball’s in play, that there’s not some incompletion or that some running back runs into nine guys and gets zero yards.”

Of the Bulldogs’ red-zone scores, 15 have been touchdowns with one field goal.

“Don’t be afraid to attack where they’re at,” Leach said. “The red zone’s not just about setting up a field goal. The point of it is to try to score a touchdown.”

Rogers played at Brandon (Miss.) High School, where his father, Wyatt, is the offensive coordinator.

In Leach’s 21 seasons as a head coach at Texas Tech, Washington State and Mississippi State, Rogers is the only quarterback to start as a true freshman.

“He came in already knowing you’ve got to watch film, and it was an expectation that he was going to watch a lot of film. I think that helped a lot,” Leach said. “A lot of times a guy comes in and, ‘Ugh, there’s film?’

“They haven’t heard of it or haven’t thought of it. He knew he was going to watch a lot of film, and I think there’s a sense of timing as far as working with and developing himself and the other players.

“I think he really has a sense of when to work and what’s important, and I think there’s that just because he sees what his dad does over the years and every day.”

In Rogers’ only previous start against Arkansas, he completed 36 of 48 passes for 417 yards and 4 touchdowns in the Razorbacks’ 31-28 victory last season. He had six touchdown passes in the Bulldogs’ 45-14 victory over Bowling Green two weeks ago and three against Texas A&M.

“I think a lot of what he’s gone through and worked on, he expected and saw it coming,” Leach said. “So I think it allows him to immerse himself in it a little quicker and more thoroughly.”

Thomas, a sophomore, had a career-best game against Texas A&M with five receptions for 134 yards.

“I think he’s improving,” Leach said. “I think he has to be more consistent. He has to be able to string together one good day at work after the next.

“I also think sometimes players need to understand the difference between being consistently good and occasionally great.

“It’s easy to have a great play here or there and think, ‘All right, well, that’s it,’ and cruise along. The most valuable guy is the guy who’s consistently good, the guy that you can count on every play.

“I think he’s getting better. He’s dangerous when he’s got the ball, he’s faster than he looks, and he’s got a lot of range.”

Junior Dillon Johnson is the Bulldogs’ leading rusher with 50 carries for 302 yards and has 25 catches for 150 yards.

Mississippi State is averaging 93.4 rushing yards, the most for a Leach-coached team since Washington State averaged 120 in 2016.

“The biggest thing is you’re trying to figure out the best way to move the ball, and that’s all part of it,” Leach said. “I did think we needed to improve on it. I thought last year our backs were slow on hitting the hole, and I thought our linemen didn’t finish blocks at the second level.

“We’ve got to keep getting better at that.”

Senior center LaQuinston Sharp is Mississippi State’s only offensive lineman starting at the same position he did last season, but the Bulldogs are averaging 38.5 points and 440 yards.

“We didn’t play perfect, but we didn’t get rattled,” Leach said of the line’s play against Texas A&M. “If something didn’t go correctly, we’d regroup and play the next one.”

Junior cornerback Emmanuel Forbes was named the Bronco Nagurski National Defensive Player of the Week after he had two interceptions against Texas A&M, including a 33-yard return for a touchdown. His 11 career interceptions lead active FBS players.

The Bulldogs have found a reliable kicker in Ben Raybon, a senior transfer from Northern Colorado. He’s hit 4 of 5 field goal attempts with a 53-yarder against Bowling Green after Mississippi State was 14 of 25 last season, including 0 of 3 at Arkansas.

Mississippi State is off to its best start through five games since going 5-0 in 2014 and is ranked for the first time this season.

Leach said he tries to ignore the rankings and focuses on the next game.

“I’ve been busy watching film all night, and it’ll happen again tonight, so I’m kind of preoccupied with that,” Leach said. “There’s no real stopping point on the poll thing, so just try to worry about what’s right now and what you can control.

“Today it’s, ‘Put together the best game plan you can,’ Tomorrow it’s, ‘Have the best practice you can,’ and so it goes.”