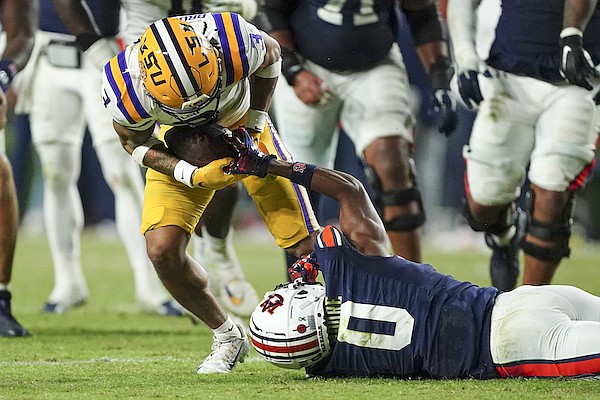 Auburn had driven to the LSU 36 and had second and 11 with 2:25 left when quarterback quarterback Robby Ashford passed to Kok Moore over the middle at the 32.

LSU then was able to run out the clock.

“I think they counted it as an interception, but the ball was in fact completed in our eyes,” Kelly said. “Greg just took it out of [Moore’s] hands, so just a great individual play.”

It was the fifth career interception for Brooks, who had four with the Razorbacks, including a 69-yard touchdown return in Arkansas’ 21-14 victory at Mississippi State in 2020.

“I think Greg’s a very smart player,” Kelly said. “That route had been run a few times and in an earlier timeout we were reminded about some plays that they were likely to come back to, and that was one of them.

“So Greg was sitting on the route, and he was ready for it and just made a great play.”

Brooks, a Louisiana native, decided to transfer to LSU after last season.

“Greg’s a very experienced SEC player, so to have a guy in that position for us that we got through the transfer portal paid great dividends for us in that game,” Kelly said. “That obviously was a game-changer play he made for us.”

Kelly said Brooks, who moved from nickel back to safety this season and has 18 tackles, deserved the game ball.

“Greg’s been asked to do a lot of things for us, and we just thought that this was the culmination of his unselfish play all year,” Kelly said. “Then the last play he made was the biggest play.”

“I’m sure that everybody wants an update on Bryce, so I’m going to give it to you,” Saban said in his opening comments. “He’s doing some things in practice and he’s still listed as day-to-day.”

That means Young, a junior who won the Heisman Trophy last season, remains questionable for No. 1 Alabama’s game against Texas A&M on Saturday night.

“No decision is going to be made until he decides, and we decide, from a medical staff standpoint, whether he can go out there and functionally do his job,” Saban said.

Young sustained what Saban has called a sprained AC joint in his right shoulder in the second quarter of the Tide’s 49-26 victory at Arkansas last week and missed the rest of the game.

“We’ll just have to evaluate it day-to-day,” Saban said. “I can’t tell you if that’s going to be today, tomorrow or the next day.”

Texas A&M quarterback Max Johnson, who started the previous three games in place of Haynes King, also is questionable for Alabama. He suffered a hand injury in the Aggies’ 42-24 loss at Mississippi State last Saturday.

When Virginia Tech announced Tuesday Justin Fuente had been fired, it raised the number of Power 5 conference coaches already let go this season to six.

Harsin’s departure from Auburn still seems like a foregone conclusion — especially with the Tigers going 3-2 in five home games to start this season and No. 1 Alabama, No. 2 Georgia, No. 9 Ole Miss, No. 23 Mississippi State, Arkansas and Texas A&M still on the schedule.

After the Tigers ended last season with a five-game losing streak to finish 6-7 in Harsin’s debut, several players left via the transfer portal and defensive coordinator Derek Mason left for Oklahoma State, Harsin survived an investigation into the program by Auburn’s administration.

Harsin started this year No. 3 on the CBS Sports coaching hot seat list, and the two ahead of him — Nebraska’s Scott Frost and Arizona State’s Herm Edwards — have been fired along with Fuente, Georgia Tech’s Geoff Collins, Colorado’s Karl Dorrell and Wisconsin’s Paul Chryst.

“I think every program is different, I really do,” Harsin said at his weekly news conference Monday when asked about so many coaches fired early in the season. “I don’t know if it has to do with anything bigger than that.

“I couldn’t tell you each and every program’s situation and where they are and those types of things. That’s just part of it. I don’t know if there is a better answer than that.”

Greg McElroy, a former Alabama quarterback who is an ESPN analyst and radio talk show host, said on his podcast that Colorado would be a good landing spot for Harsin given that most of his coaching career is connected to Boise State.

“Where do they go from here?” McElroy said of Colorado. “Guy that would make a ton of sense to me is Bryan Harsin.

“Of course, Bryan Harsin has come under an awful lot of scrutiny with what’s going on at Auburn. Is he in? Is he out? How does it all work right there? I don’t know. I can’t answer those things.

“All I know is that Bryan Harsin can coach football. I know that maybe he may not be the best fit for Auburn, especially those that want to control the program at Auburn. Maybe they aren’t totally onboard with him being the head coach. I know that at Boise State, that guy got it done.”

Before going to Auburn, Harsin had a 7-5 record at Arkansas State and 69-19 record at Boise State, where he also was a player and an assistant coach.

The game was moved from Saturday because of the threat of Hurricane Ian.

“I woke up Saturday morning, had a couple of cups of coffee, watched a little bit of “GameDay”, went downstairs, jumped on the Pelaton for a while,” Beamer said. “Came back upstairs, went and got a haircut, came home, watched football all afternoon.”

Of particular interest to Beamer was the Ole Miss-Kentucky game, which kicked off at noon Eastern and was won by the Rebels 22-19.

“After the noon game, I went on a walk with the family for a little over an hour,” Beamer said. “Came home, watched more football.

“Ordered Mexican food for dinner. Built a fire on the back porch and sat outside and watched football.

“Went to bed at about 11 and that was it. It was awesome. I see what a normal Saturday is like when you’re not working on Saturday.”

Tennessee’s Hendon Hooker and LSU’s Jayden Daniels, whose teams face each other on Saturday in Baton Rouge, are among five FBS quarterbacks with at least 100 pass attempts who have not thrown an interception this season.

The other three quarterbacks with at least 100 passes and no interceptions are San Jose State’s Chevan Cordeiro, Oklahoma’s Dillon Gabriel and Kansas State’s Adrian Martinez.

All five are transfers.

Alabama outside linebacker Will Anderson, who has 9 tackles for losses of 45 yards and a 35-yard interception return for a touchdown, isn’t interested in the verbal spat Texas A&M Coach had with Crimson Tide Coach Nick Saban last summer.

“I come here to play football and do what my coach tells me to do,” Anderson said when asked Monday if he’s excited about facing the Aggies on Saturday night. “I don’t come here to write tweets.

“I don’t come here to go back and forth. People may try to make it a big thing, but at the end of the day, I have a scholarship to play football.

The Tigers beat Mississippi State 31-16 by outscoring the Bulldogs 21-0 in the fourth quarter and won at Auburn 21-17 after trailing 17-0.

“You’ve got to understand that if you’re up on the scoreboard, it doesn’t matter,” said Tennessee Coach Josh Heupel, whose Vols play at LSU on Saturday. “We talk a lot about playing it 0-0 for 60 minutes.

“The way [the Tigers] play and compete, no matter what the scoreboard looks like, you have to be prepared for their best for 60 minutes. They are a resilient team. They’ve done a really good job of creating turnovers, making special teams plays, creating short fields and flipping the way the game’s played here.

“You can see that from Week One all the way through this past week.”

Auburn Coach Bryan Harsin took exception to a question at his Monday news conference from a reporter who included the comment Georgia quarterback Stetson Bennett is “obviously not the most athletic guy in the world.”

Auburn plays at Georgia on Saturday.

“I’m not sure Stetson would say that,” Harsin said of the reference to Bennett not being athletic. “I’m impressed with him.

“There are guys that are bigger and more athletic, but I was fortunate to coach a guy that wasn’t very athletic but won more games than any college quarterback ever, and they said the same thing about him.”

Bennett is 19-3 as a starter for the Bulldogs, including 5-0 this season after he helped Georgia win the national championship last year.

“He finds the open receivers, he’s accurate, and he manages their offense really well.”

When Georgia won 34-10 at Auburn last season, Bennett passed for 231 yards and 2 touchdowns and rushed 6 times for 41 yards.

“I don’t see a whole lot of weaknesses in his game,” Harsin said. “I think he has command of what they are doing, and he’s plenty good enough to hurt you in all the ways.”

This season Bennett has completed 116 of 168 passes for 1,536 yards and 5 touchdowns with 1 interception and has 4 rushing touchdowns.

In 17 games at Tennessee since transferring from Virginia Tech, Hooker has passed for 4,138 yards and 61 touchdowns.

This is the first matchup when both teams are ranked since No. 5 LSU beat No. 14 Tennessee 21-14 in the SEC Championship Game.  The Tigers moved up to No. 2 after that victory and beat Ohio State 38-24 in the Sugar Bowl to win the national championship.

It would be a huge road victory if the Vols can get it with a home game against Alabama next week.

86-37 — Margin LSU has outscored its opponents in the second half this season.

0-16 — Missouri’s record against No. 1-ranked teams after  Georgia came back to beat the Tigers 26-22 at Faurot Field.

"I saw today where there are headlines in the paper where I'm going to keep it a secret what we're going to do with Bryce [Young]. It sounded like me making that statement. I've never said that. But it was there in black and white ... So you can make up whatever you want to make up."

“Coming back from a 17-0 deficit on the road is not where you want to be, but we found a way. It’s been the DNA of this group to battle. To fight. And they certainly did that tonight.”

— Texas A&M Coach Jimbo Fisher on patching things up with Alabama Coach Nick Saban after being critical of him during a summer news conference.