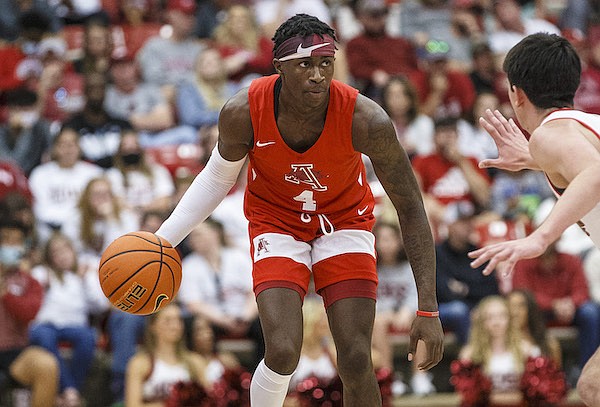 Arkansas guard Davonte Davis (4) dribbles the ball on Sunday, Oct. 17, 2021, during the first half of the Razorbacks' annual Red-White scrimmage at Barnhill Arena in Fayetteville.

FAYETTEVILLE — The tip-off time has been set for Arkansas’ annual Red-White men’s basketball game next weekend.

The Razorbacks will hold the intrasquad scrimmage in Barnhill Arena at 2 p.m. on Sunday, Oct. 16., and the game will air on SEC Network-Plus. Doors will open at 1 p.m., admission is free, and seating is available on a first-come, first-served basis.

The scrimmage is the first of three scheduled pre-season events for the Razorbacks, who are entering Year 4 under Eric Musselman.

Expected to be ranked well inside the top 25 of preseason polls in the coming weeks after a second consecutive Elite Eight appearance, Arkansas will unofficially begin the 2022-23 season with a home exhibition against Rogers (Okla.) State on Oct. 24, then travel to Austin, Texas, on Oct. 29 to face the Texas Longhorns in their final tune-up.

No game time has been set for the first exhibition, but tipoff at Texas is scheduled for 3 p.m. Central. The game will air on Longhorn Network.

Arkansas is scheduled to officially open the season on Monday, Nov. 7 against North Dakota State in Bud Walton Arena.