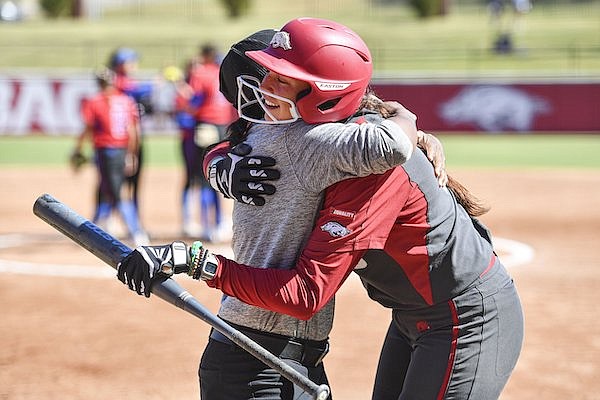 Arkansas third baseman Spencer Prigge hugs an assistant coach after hitting a home run during an exhibition game against Louisiana Tech on Sunday, Oct. 9, 2022, in Fayetteville.

FAYETTEVILLE — Spencer Prigge hit a solo homer and drove in two runs to lead Arkansas to a 4-2 win over Louisiana Tech in fall college softball Sunday at Bogle Park.

But that was just the opening act.

She came back with 3 doubles, 2 walks and drove in 6 runs in the Razorbacks’ 27-5 win in the nightcap in 10 innings as Arkansas finished 4-0 on the weekend.

The sophomore from Phoenix hit just .189 and was limited to 21 games last season because of back problems. But she came up big Sunday.

Prigge said she’s feeling well and it showed at the plate.

“Being from last year being injured, I know my rehab this year,” Prigge said. “Just feeling out how it goes and taking it day by day.’

Deifel said Hannah Gammill, who caught the first game, is working her way back into feeling comfortable behind the plate. The pitching staff did some good things as well, but still has work to do, Deifel said.

“She’s doing fine,” Deifel said. “She’s working. It’s been a couple years since she’s been in that much game action. So there’s a couple things she’s just got to get back comfortable again. Even when we play each other she doesn’t spend a lot of the time back there.

“That’s what this weekend was really good for, exposing some of those things that now we can go to work on it. She’ll be great. I liked what we looked like in the circle today. I think the big thing over the weekend is just limiting free passes. That’s a big focal point for us. I just felt like we started a couple rallies. We worked out of some things, too, over the course of the weekend.

“We’re leaving this weekend with really good things and things we need to work on.”

Prigge tied the Louisiana Tech game in the fifth with her solo homer. Gammill drew a bases-loaded walk to give the Razorbacks a 2-1 lead. Arkansas added to the lead in the sixth as freshman Hannah Camenzind doubled and later scored on Prigge’s RBI single.

Tech scored a run in the third courtesy of a wild pitch by Herron.

Callie Turner and Hannah Camenzind combined in the circle in Game 2 to allow 5 runs on 4 hits over 10 innings. Each pitcher threw five innings apiece.

Freshman Reagan Johnson also hit a grand slam in the second game. She’s one of a freshman class that was rated No. 1 in the country by Extra Innings Softball. Deifel said the group is talented .

“I really like where they’re at,” Deifel said. “I like their starting point and I like how they’re continuing to grow since they got here. I think we do have lapses here and there. It just reminds me we’re young. And so it’s literally continuing to focus on doing to do the little things.

“Where they thrive is in competition. So I think when we saw Reagan Johnson today, that’s the best Reagan Johnson’s looked. She thrives in competition. She thrives in that lead-off spot. So it was just kind of getting her back using her legs. But I think they are only going to continue to get better. I think most freshmen go through a transition of getting on a college campus and having more competition around them.”

The Razorbacks will wrap up fall workouts by hosting Seminole (Okla.) State at 5:30 p.m. on Wednesday. They will play an intrasquad scrimmage at 6 p.m. on Friday.