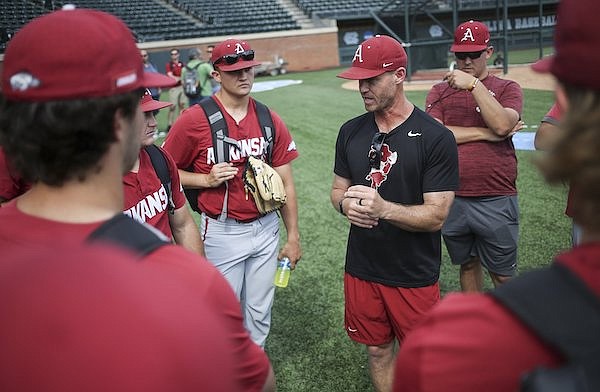 FAYETTEVILLE — Arkansas’ baseball team will challenge itself this week against similarly aged players in a different stage of their careers.

The Razorbacks will host the Texas Rangers instructional league team at Baum-Walker Stadium for a pair of scrimmages beginning with a nine-inning contest Wednesday at 6 p.m. The teams are scheduled to play seven innings Thursday beginning at 4 p.m.

Admission is free to both scrimmages.

“When you get a talented group of players like we're going to get with the Rangers, it’s going to be a really good challenge,” Arkansas pitching coach Matt Hobbs said. “It is also a good measuring stick for some of our guys to say, ‘Hey, you know, maybe professional baseball is not as far away as I think it is.’”

Hobbs said many of the Rangers’ players who will travel to Arkansas are fresh out of high school or college, or are international players. That is the case with the top-30 prospects who are on the roster, all of whom were drafted by the Rangers earlier this year — Pollard as a fifth-round draft pick out of Woodward Academy in College Park, Ga., Ramirez as a seventh-round draft pick out of Long Beach State University and Gutierrez as an international draft pick from Venezuela.

“I think that it's going to be a really good experience for our team from a competition perspective," Hobbs said, "but also just to kind of measure ourselves a little bit where we're at and what we need to work on.”

“Jaxon has been as good as we've got, and that's saying something, I think, on this pitching staff,” Hobbs said. “He's been very good.

“He throws way more strikes — like a ton more strikes with every pitch. All of a sudden, Jaxon is becoming…who we want him to be. It’s not because he started throwing harder and it’s not because his breaking ball got significantly better. It's because those pitches are now inside the zone more often.”

Hobbs said pitchers are likely to be on counts of around 50 pitches.

“I think you're going to see guys more than one inning,” Hobbs said. “If we were just playing these guys one time and it was going to be like 12 innings or something, I’d just throw everybody once. But we're going to play two games, so it’s 16 innings."

Hobbs said he is looking forward to seeing how younger players deal with the speed of a professional team.

“If our pitchers are too slow to the plate to be able to handle the running game, it exposes it right away,” Hobbs said. “That's something that you get a little bit in practice, but you're going to get a lot when somebody is going to try to take advantage of you. I think that could be good for young pitchers.”

Arkansas hitting coach Nate Thompson said he is looking forward to the exhibitions because it will give the Razorbacks the chance to play as one team for the first time this fall. Arkansas has played only intra-squad scrimmages since fall practice began Sept. 8.

“I just think it's a great opportunity for us to be on one side for the first time, and for us to maybe play with some things,” Thompson said. “It’s obviously different than intra-squadding because there's always somebody from our team that's hitting it. It’s kind of like when one thing is going really well, the other side’s not sometimes.

“It’s going to be good for us from that standpoint of being able to all be on the same side of things and see how we line up, see how all phases of our game kind of come together right now, and see what we need to keep improving on.”

Caleb Cali, a JUCO All-American infielder at College of Central Florida last season who has been one of the Razorbacks’ top hitters this fall, said players are looking forward to the challenge this week’s scrimmages will present.

“Whenever you get to test yourself against some of the best players in the game, or just professional players by any means, it's exciting,” Cali said. “You get to kind of match up and see where you land.”

NOTABLE There will be no live TV, streaming or radio coverage either day….The Razorbacks will use metal bats and the Rangers will use wood bats for the scrimmages….Limited concession areas will be open both days and no outside food or drink will be permitted except for in the left-field Hog Pen. Premium-seating areas will be closed to the public....The scrimmages against the Rangers will be the first during the fall for Arkansas since 2019, when the Razorbacks played Oklahoma at home and at Oklahoma State.