Jefferson said to be OK after late injury at BYU 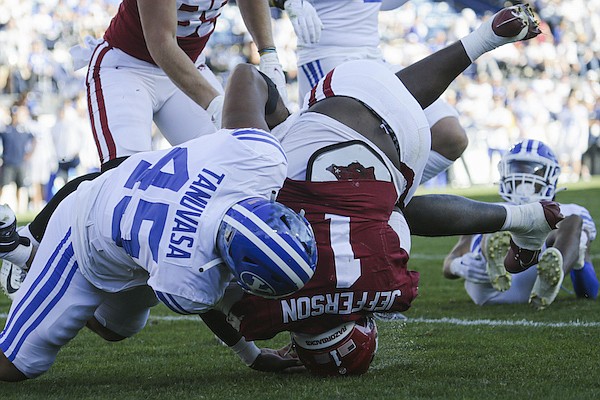 Arkansas quarterback KJ Jefferson (1) lands on his head during a game against BYU on Saturday, Oct. 15, 2022, in Provo, Utah.

Arkansas coach Sam Pittman said quarterback KJ Jefferson is OK after he exited with an injury late in the fourth quarter of the Razorbacks' 52-35 victory at BYU on Saturday.

Pittman said Jefferson suffered a stinger to his neck when he dove for the first-down marker on a third-down run with less than three minutes remaining. He laid on the field for a short time before he walked off on his own power.

"KJ is fine," Pittman told the Razorback Sports Network post-game show. "He went down and he just had a little stinger in the neck."

Jefferson told RSN it was the first time he had experienced the injury.

"It kind of caught me off guard a little bit," Jefferson said. "In all the years I've been playing football I've never had a stinger, so when I did, it just kind of shocked me a little bit."

Jefferson passed for 367 yards and a career-high five touchdowns at BYU in his first game since he injured his head late during a game against Alabama on Oct. 1.

Arkansas is not scheduled to play again until Oct. 29 at Auburn.