Turning point: BYU did not intend to snap on game's critical play 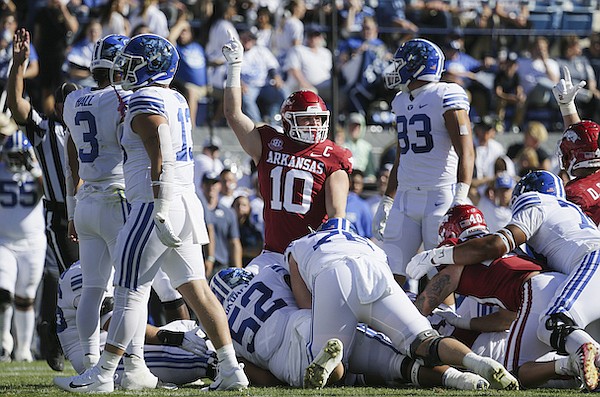 Arkansas linebacker Bumper Pool (10) signals the Razorbacks have the ball following a fumble during the second quarter of a game against BYU on Saturday, Oct. 15, 2022, in Provo, Utah.

Defensive stops were at a premium Saturday, and one of Arkansas’ turned the tide during the Razorbacks’ 52-35 victory at BYU.

With his team leading 21-17 late in the second quarter, BYU coach Kalani Sitake sent his team to the line of scrimmage, intending to try to draw an Arkansas defender offsides on fourth-and-1 from the Cougars’ 34-yard line.

But center Joe Tukuafu snapped the ball to quarterback Jaren Hall, who was not expecting it. Arkansas safety Latavious Brini recovered the fumble at the 34 with 5:18 to play in the first half.

The Razorbacks took a 24-21 lead four plays later on a 4-yard pass from KJ Jefferson to Matt Landers with 3:39 remaining before halftime.

Sitake, the seventh-year BYU coach, seemed flustered about the play following the game.

“There was not even a play call in place,” Sitake said. “We were trying to draw them offsides and the ball was snapped, which is why Jaren was surprised at it, and there’s the result.

The Razorbacks never trailed again and added another touchdown late in the quarter to take a 31-21 lead at halftime.

“I think that was the big turning point in the game,” Arkansas coach Sam Pittman said, “because let’s face the facts, we hadn’t been able to stop them.”

BYU had scored touchdowns on three consecutive possessions before the fumble. Those three scoring drives covered 232 yards in 21 plays.

It took a replay review to set up the game’s turning point. Hall was initially ruled down at the 35, but replay determined his forearm hit the ground before he reached the first-down line.

“I think that fourth-and-1 really shifted the tide,” Arkansas cornerback Hudson Clark said. “To get off the field quick was huge for our defense.”