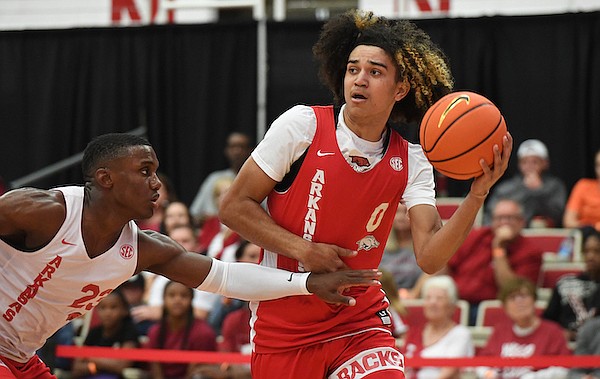 Playing for the Red team, he served as a catalyst in the 64-59 victory over White without making a shot from the floor. The 6-7 guard stuffed the stat sheet elsewhere and finished with 9 rebounds, 9 assists, 3 blocks and 1 steal.

Black added four points and misfired on all three field-goal attempts, including a three-pointer. But his playmaking and stingy defensive play stood out in the up-and-down nature of the game.

“He’s just unique,” Arkansas coach Eric Musselman said. “He’s not like a normal point guard because you’re talking about a 6-8 point guard who is a really willing passer. You can look over the last several years, there’s not many college basketball players who can do what he can do.”

Black’s nine assists generated 20 total points for Red, including three-pointers from Arizona State transfer Jalen Graham and freshman Joseph Pinion. Five of his assists came in the opening quarter as Red jumped to a 20-12 lead.

Graham was the beneficiary of 4 Black assists, while Makhi Mitchell — who finished with 6 points and 5 rebounds — was on the receiving end of 2 of the guard’s finds. On a baseline-out-of-bounds play late in the third quarter, Black connected with Wichita State transfer Ricky Council for a dunk just before time expired.

“We have a lot of talented players,” Black said. “We have a lot of dudes who can score the ball. My game is really just taking what the defense gives me and trying to make plays for my team, just winning plays.

“I’ve just got to do what I can do to impact winning.”

Musselman was perhaps most impressed with the guard’s defense. His three blocks were a game high and one more than White tallied as a team.

“It’s kind of wacky how last year we lead the nation at taking charges because we had a player in Jaylin Williams that loved to take charges and had perfected the craft of doing that,” he said. “This year, we do have some guys like AB that are really, really incredibly gifted at blocking shots from the perimeter.”

Davis, one of the Razorbacks’ two returning players from 2021-22, was originally tabbed to play for the White team, but he was not in uniform as the teams were on the floor for pre-game warmups. Freshman guard Nick Smith moved to the White team in his absence.

Musselman added that he did not know until just before tipoff that Davis would not play.

“(It is) not of concern to anybody," he said, "but there was no reason to let him play today. It’s a knee, but, again, there’s no medical concern.”

Davis last season averaged 8.3 points per game on 42.9% shooting. He started 14 of the Razorbacks’ 37 games during their second consecutive Elite Eight run.

Musselman, earlier in the week as he previewed the scrimmage, said four of Arkansas’ big men are locked in a battle for roles and playing time. Graham was the star of the game in the Red team’s win.

Graham finished with a game-high 25 points on 10-of-11 shooting. In the Razorbacks’ 4 exhibition games during their foreign tour in Italy and Spain, Graham scored just 8 points on 4 of 12 from the floor.

“What got me going early was just running the floor, trying to score off the start with easy twos, running the floor hard,” Graham said. “I just want to compete. I felt like I had something to show coming into this game for my teammates and the coaching staff.

“Just trying to show that I want to be here, I want to play hard and be out there. That's pretty much it.”

An All-Pac-12 performer with the Sun Devils last season, Graham scored 9 points in the first quarter and 6 in the second, leading Red to a 32-24 halftime lead. He did not miss a shot until the fourth quarter.

Graham totaled 2 rebounds, 1 assist and 1 steal, and was 4 of 8 at the free-throw line in 24-plus minutes. Red outscored White by 14 points when he was on the floor.

“He played today much like some of the video evals where he was a really great spin-dribble drive guy,” Musselman said, “and a guy that you can isolate. We have felt for quite some time that he shot the three pretty well in practice. Not that we want him shooting it all the time, but I do think he can keep the defense a little bit honest at times. We would like him to rebound the ball a little bit more.

“But he is a really good passer and a really willing passer. Once he gets the ball and the defense gets congested, he does a really good job of finding people. For sure, this was good for his teammates to see him play well.

“I think this is good for his confidence, as well."

Graham noted that his less-than-stellar showing overseas was a bit of a wake-up call for him.

“Coach Muss (was) letting me know what it's going to be if I don't step up and play hard,” he said. “When I came back from the European tour, I was just trying to focus. When I got an opportunity in the game, I had to make the best of it. That's what I'm doing.”

Graham and the Red team controlled the game through three quarters, but Smith and Missouri transfer Trevon Brazile made things interesting late.

Trailing by as many as 17 points early in the fourth quarter, White rallied behind the duo’s efforts, as well as contributions from freshmen Barry Dunning and Derrian Ford, and veteran forward Kamani Johnson. Over a stretch of 2:25, White went on an 11-0 run, cutting its deficit from 56-39 to 56-50.

Smith scored 9 points during the run and added 11 in the final quarter on 4-of-7 shooting. Brazile pitched in 7 points on 3 of 3 from the floor, including a left-wing three.

"I thought they both did a good job of continuing to compete,” Musselman said. “One of the things that we always talk about is competing and playing until the end of the game regardless of winning or losing. Even if we're winning by a large margin, it's how you continue to play for the full game.

“Some really good things out of both those players. I thought TB struggled a little in the first half and then played a better second half, for sure."

Smith scored a team-high 22 points on 7-of-20 shooting, including 2 of 7 from deep, and Brazile turned in a 13-point performance on 6 of 12 from the field. Smith drew six fouls in the game, which keyed a 6-of-8 day at the line.

Both players finished with three assists, which was second on the team to the four by Rhode Island transfer forward Makhel Mitchell.

“He’s fun to watch, he’s cosmetically pleasing with how he moves and he’s got great command with the ball,” Musselman said of Smith. “He is a guy that will make threes for us and make big shots for us. He’ll continue to work on some of his off-ball defensive principles that we’re doing.