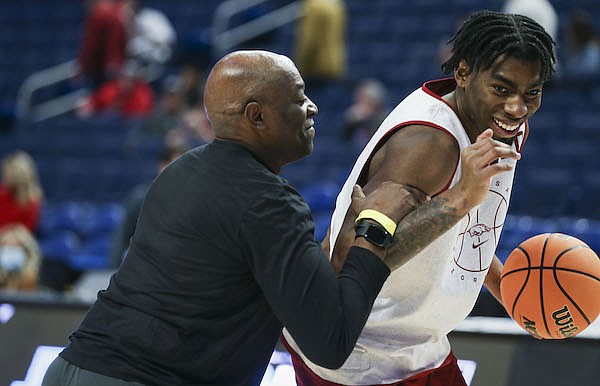 Arkansas assistant coach Keith Smart practices with forward Kamani Johnson on Wednesday, March 16, 2022, during a practice before the first round of the 2022 NCAA Division I Men's Basketball Championship at KeyBank Center in Buffalo, N.Y.

BIRMINGHAM, Ala. — Kamani Johnson is thankful and motivated.

One of two returning scholarship players from the Razorbacks’ 2021-22 team that reached the Elite Eight of the NCAA Tournament, Johnson was selected by fourth-year coach Eric Musselman as a player representative for SEC Basketball Media Day on Oct. 19 alongside junior guard Davonte Davis.

He described the experience of being a face for Arkansas basketball as a blessing. Donning the Razorbacks’ traditional white home uniform and his No. 20, he also paired a stylish chain and watch with a smile reflective of his personality.

A player who at times has led the charge for the Razorbacks in terms of on-court toughness and grit, Johnson wants to make the 2022-23 season his best yet, and memorable from a team perspective. He remembers vividly the feeling of twice coming up one win short of the Final Four.

Johnson also wants to put in the rearview mirror the personal struggles he has faced since arriving at Arkansas after a stint at Arkansas-Little Rock.

“I think that was just me maturing, honestly. I think I’m way past that,” Johnson said. “I think I’m kind of mature, have my goals set, disciplined. I’m kind of grounded, for sure.”

Following his June 2021 arrest and suspension from the team last December, Johnson turned to Arkansas assistant coach Keith Smart and recruiting coordinator Ronnie Brewer for support. Both members of Musselman’s staff are like family to the forward, he said.

Johnson considers Smart and Brewer to be his biggest advisors in Fayetteville for on-court and off-court matters.

“I look at them as my mentors, father figures. I really lean on those guys any time I’m dealing with some struggles. They’ve always been there for me and have never let me down.”

Davis, the lone Razorback on the roster who has been in the program longer than Johnson, believes the forward has grown a lot in his time in Fayetteville.

“He’s learned off the court the most,” Davis said. “He didn’t know how to be the person he is now (when he arrived). He’s more respectful, he’s learned how to talk to people and things like that. I think that’s something that spoke out to me.

“I mean, he was a totally different person coming in.”

In his first season on campus, Johnson was a spectator as a result of his transfer. This season, he wants to do as little sitting and watching as possible. His aim is to be an essential part of a successful team.

Johnson noted he will enter this season at a lower weight than he played at in 2021-22, and with greater confidence. His mission in the offseason was to work himself into better shape, and strength and conditioning coach Dave Richardson was a key figure in that process.

“When you’re that close to a Final Four, you kind of see it and experience the pain of the losses,” Johnson said. “That’s kind of what fueled us this summer. Me and Devo, we’ve been there. Muss, I think, as a coach, he wants to get there.

“When you’re in the gym and that’s your motivation, you tend to work hard and have great workouts.”

Johnson last season was a stout offensive rebounder when in the lineup. Ten times he finished a game grabbing two or more of Arkansas’ misses, which produced an offensive rebound rate of 18.1%, according to KenPom data.

Johnson, according to CBB Analytics, averaged 6.6 offensive rebounds per 40 minutes played, placing him in the 99th percentile nationally. Musselman has described him as a consistent loose-ball getter, as well.

He averaged 9.3 points on 13-of-19 shooting – 11 of 13 at the free-throw line – and a team-high 9.3 rebounds per game during the Razorbacks' August foreign tour. Johnson contributed 2.8 assists and 1.5 steals per outing as part of a well-rounded trip.

The senior has a desire to be more than just a dirty-work player and physical presence on the glass.

“I think I play with a high motor already, so getting my body in better shape so I can sustain that motor throughout a longer period of time has been really important to me,” Johnson said. “Also, I think offensively I’ve become a way better, more aggressive player. My play-making skills have been better and, you know, having all this talent around me has helped me out and is making the game super easy for me.

Johnson said his basic why is his family, friends and closest supporters, and his love of the game. But the loss to Duke in the Elite Eight in March still sits with him.

Had Arkansas knocked off the Blue Devils in San Francisco, he believes the Razorbacks would have had a good chance to cut down the nets in New Orleans.

“We’re trying to get to a Final Four, so (Musselman) has been coaching us that way,” he said. “This summer, that’s kind of what drove me and motivated me.”