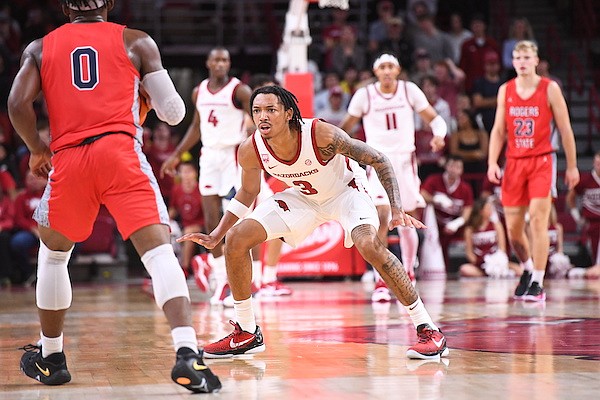 One year after the Razorbacks were taken to the wire in their first outing of the preseason, they easily defeated Rogers (Okla.) State by a score of 83-49 at Bud Walton Arena.

Nick Smith, tabbed by multiple outlets as the national freshman of the year this preseason, scored nine points — all in the first half — in 20 minutes for the Razorbacks. Smith sat for most of the second half.

"Once we got a little bit of a lead, I wanted to try to get both Nick Smith Jr. and Anthony Black (6 points, 5 assists, 3 rebounds in 22 minutes) out of the game and let some other guys get some opportunities," Arkansas coach Eric Musselman said on Razorback Sports Network.

Trevon Brazile, a transfer forward from Missouri, also started strong and finished with 11 points, 6 rebounds and 4 blocks in 23 minutes.

Joseph Pinion, a freshman from Morrilton, caught fire for Arkansas after halftime and finished with a game-high 15 points. Pinion scored 12 points in the second half and made 4 of 6 from three-point range.

Sherwyn Devonish-Prince led Rogers State with 13 points on 5-of-14 shooting.

Like it showed during a foreign tour in Spain and Italy in August, Arkansas was active around the rim. The Razorbacks had eight dunks and made 13 of 16 lay-up attempts.

Arkansas out-scored the Hillcats 42-14 in the paint and held a 42-22 advantage in rebounds.

"I think you could see our depth up front," Musselman said.

Six Razorbacks scored during a 14-2 run over 6 minutes, 43 seconds in the first half as Arkansas increased its lead from 12-9 to 26-11. Black had a pair of second-chance makes during the stretch, including a dunk following a missed free throw by Jordan Walsh.

Musselman was assessed a technical foul during the first-half run when voiced his displeasure over a charge called against Makhel Mitchell. The Razorbacks were whistled for 17 fouls.

Rogers State fouled 25 times, but Arkansas struggled to a 20-of-37 finish at the free-throw line. The Razorbacks made 7 of 18 three-point attempts.

The Hillcats were held to 3 of 12 from beyond the arc.

One of our big things Coach Muss always talks about is defense and compete on both sides of the floor, especially on the defensive side," Smith said. "I feel like we showed that tonight, but we can be better on defense."

In addition to free throws, Musselman said he was concerned about his team's 16 turnovers.

"We have a goal every game, trying to have nine or less turnovers," Musselman said. "So the turnovers in the first half were concerning. Second half, I think we only had five turnovers, so we did a better job getting the shot on goal in the second half. We did an excellent job drawing free throws 37 FTAs; definitely got to improve our free-throw percentage. We left way too many points on the board shooting just 54% from the foul line."

Monday’s exhibition was a stark difference from when the Razorbacks had to rally from a 14-point second-half deficit to beat East Central (Okla.) University 77-74 on Oct. 24, 2021. That team finished 28-9 and lost to Duke in the Elite Eight of the NCAA Tournament.

"It was better than last year's exhibition game; I know that," Musselman said. "We've still got a lot of work to do."

Arkansas, ranked 10th by the Associated Press this preseason, is scheduled to play its final exhibition game Saturday at No. 12 Texas. The game is scheduled to start at 3 p.m.

It will be the Longhorns’ first game inside their new $375 million Moody Center. The outcome will not count against either team’s record.

Arkansas is scheduled to open the regular season Nov. 7 against North Dakota State in Fayetteville.