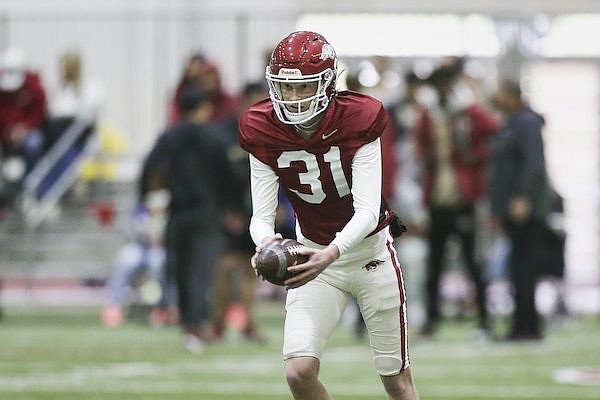 FAYETTEVILLE — A family reunion nearly two years in the making will take place Saturday, about an hour before kickoff at Reynolds Razorback Stadium.

You can’t miss it.

The two tallest players on the field at the time, one wearing No. 31 for Arkansas and the other donning No. 31 for Cincinnati will share a hug and a brief chat before getting to work.

The Fletcher brothers from Melbourne, Australia, haven’t seen each other in nearly two years.

Mason Fletcher, the tallest punter in the FBS at 6-7, enjoyed an outstanding freshman season as the starter for the Bearcats in 2021, riding the wave to the College Football Playoff and a 13-1 season.

Max Fletcher, a gangly 6-5, is a freshman punter at Arkansas who was floored when, after the Razorbacks expressed interest in making him a scholarship offer, he looked up their 2022 schedule.

“When I first started looking at Arkansas, I looked at the schedule and I saw Cincinnati and actually couldn’t believe it,” Max Fletcher said. “I said to my parents, ‘How crazy is this?’ ”

Mason Fletcher said when Max’s decision to sign with Arkansas was announced late last October, the impending game was a big topic in family phone calls.

“We’ve never played in program history, I believe it’s a stat like that,” Mason Fletcher said. “So I think the world, stuff like that sort of falls into place and I think that’s one of those moments.”

Making the reunion even more special: Dustin and Suzanne Fletcher have flown in from Australia to catch up with both of their sons. Max Fletcher posted a picture on social media with his parents in front of the Wild Band of Hogs water sculpture Tuesday night, writing it is the first time he’s seen them in eight months.

Dustin came to America last December to watch Mason and the Bearcats play Alabama in the Cotton Bowl in the College Football Playoff. This is Suzie’s first trip to watch her sons play American football.

Dustin, a 23-year veteran of Australian Rules Football who ranks fifth in league history with 400 games played, is a household name Down Under. He wore No. 31 and played his entire pro career for Essendon. He is known as one of the best defenders in the history of the game and for having a remarkably powerful leg.

He once kicked a 75-meter goal in a game, which figures to a little over 82 yards. To gauge the impact of that accomplishment, look up the reaction of the announcers and crowd on the YouTube video of it.

“Isn’t it great to see, a torpedo on the run then,” one announcer remarks on the video.

The angular Fletcher passed his huge leg down to his sons.

Mason and Max both played Australian football, endearingly known as footy, as youngsters. Both trained at Pro Kick Australia, which gives its pupils a breadth of punting skills and techniques and has graduated dozens into college football and the NFL.

In an email exchange with the Arkansas Democrat-Gazette, ProKick Australia director Nathan Chapman said the organization has about 75 punters in Division I football this season.

“He certainly will be one to watch over the coming years,” Chapman wrote of Max. “A really live leg and long levers to be able to send the ball effortlessly down the field. I can’t wait to watch him play this season and considering he plays against his brother in Round 1 is a dream story for the family.”

While Mason is the unquestioned starter for the Bearcats, Max is in a tough competition for the starting role with two-year starter Reid Bauer. However, his talent has been undeniable.

“Max Fletcher is punting that ball almost back to Australia,” Arkansas Coach Sam Pittman declared on his first radio show of the season last week. “He’s punting the heck out of it.”

Arkansas special teams coordinator Scott Fountain said the team is “much better” at punter now than in his previous two seasons.

“Fletcher has had a great camp,” Fountain said. “It’s going to be interesting. It’s going to come down to the wire with those two, I think. But I’ve been very, very pleased with both of them.”

The Fletchers say their backgrounds in “footy” and their intensive training as high schoolers helps provide an edge.

“We kick end over end, which is awesome. But then we have a torpedo back home, which is what you call a spiral. So I think the ability for an Australian punter to be able to kick both Aussie end over end as well as a spiral sets us apart.”

“Back home, in an Australian Football game, there’s pressure coming from the front, from behind when you’re actually playing,” Mason said. “So I guess having peripheral vision is awesome in a punt scheme because sometimes unfortunately blocks get blown up and stuff like that.

“If the snap’s low, we do ground balls in Australia where we have to pick it up off the ground. So I think there’s a lot of little stuff that make Australian punters … I don’t know if I want to say a little bit better than Americans but at least more of an impact because things in the punt game don’t all go right sometimes, and you have to be able to make quick adjustments that we all know from Australian football.”

Said Max, “Most Australians have such a good tool box. I guess we can do what any situation calls for or what the coaches want. I can do a roll out. I have such good accuracy we can keep the returner guessing, I guess.

“Especially rugby, if we can kick it across our body the other way, the returner has to run the other way. Especially sky punts, you know, coffin corner. We can aim it wherever we want. I think that’s a big thing. I think roll-out spirals is a big one as well. It gets more power. I think we call it a banana.

“Chappie [Chapman] does a good job making sure we have a good variety, and I think that’s what the coaches want and why they bring us over.”

Max Fletcher said Bauer, who gained fame late last season for a couple of fake field goals then won the Mortell Award for top holder in the country, has been “really, really good” for him.

“He’s probably the person I’ve looked up to most,” he said. “Obviously coming here not knowing what to expect and he’s taken me under his wing, which has been really good.

“If he does get, I’ll be really excited for him if he punts this year. Like I said, even if it’s a sky punt, I’m pretty good for those and if Coach needs me to do them in a game, it’s something I’ll be happy to do.”

Max Fletcher has a connection with Sam Irwin-Hill, an Australian who was a two-year starting punter from the Razorbacks (2013-14) who averaged 44.3 yards per punt in his first season.

“When I first talked to Arkansas, my coaches Nathan Chapman and Johnny Smith back home obviously mentioned he was here,” Fletcher said. “I sort of got in touch with him and … I sort of spoke to him about campus and all that stuff, so he mentioned it was such a really good spot. It was definitely good to speak to him about the experiences he had. … When I spoke to him about Arkansas, he said nothing but positive things about Arkansas fans and the coaches and all.”

Max Fletcher was asked if he has any trickery in his arsenal like Irwin-Hill, who had a 51-yard touchdown run against Texas A&M in 2014.

“I’m only 180 pounds, so everyone’s been surprised by how quick I am,” he said. “I think we’ll have to see if we can get a fake in there. I’m definitely quicker than people think.”

Max Fletcher said his father probably would have been an outstanding punter.

“He thinks it’s really cool,” Max said of Dustin’s thoughts on American football punting. “He thinks he could have done it. Obviously, we’ve got big legs and he’s probably got a bigger leg than us.

“So he’s disappointed he didn’t have a chance to do it. … He could have had a chance. He really does love it. When Mason did it last year, I would explain it to him. He really does enjoy watching people punt. He just loves watching games and … being from Australia it’s really cool.”

The Fletcher family reunion will include a few nights in Fayetteville for Dustin and Suzanne before they can visit with Mason on Friday.

“I haven’t seen my Mom in nearly two years, so to have both parents come over is awesome,” Mason Fletcher said. “To open the season up against a really big SEC team in front of what’s going to be a really rowdy, big crowd, I’m super excited. I can’t wait.”