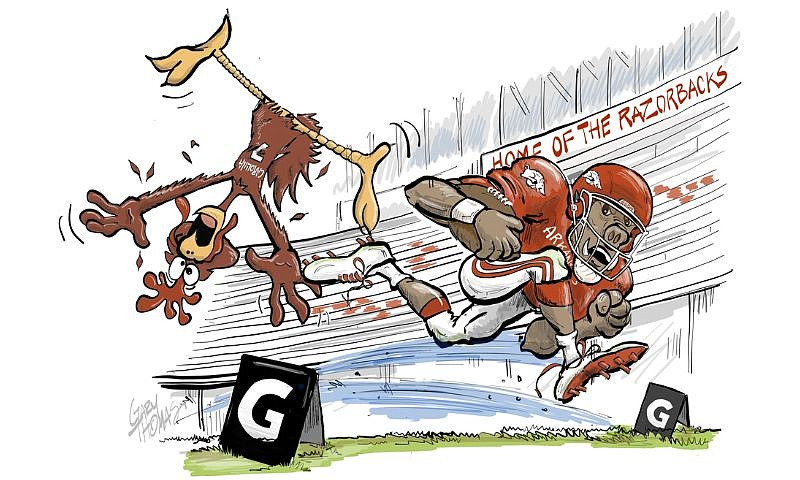 FAYETTEVILLE — The No. 16 Arkansas Razorbacks and South Carolina might be meeting today for the first time in five years, but the two programs are indelibly linked for life after joining the SEC together in 1992.

The programs have ties and parallels all over the place, not the least of which is their head coaches — Sam Pittman for the University of Arkansas and Shane Beamer for the Gamecocks — being successful, relatively recent branches off the growing Kirby Smart coaching tree, despite their 15-year age gap.

Pittman 60, and Beamer, 45, coached together under Smart at Georgia in 2016-17, were assistant coaches previously at their current schools, led their teams to bowl games last season, and have their fan bases hyped for more this fall.

Today’s 11 a.m. kickoff at Reynolds Razorback Stadium, featuring dual-threat quarterbacks KJ Jefferson and Spencer Rattler and an intriguing special teams matchup, will be the first SEC game of 2022 in the 24th meeting between the programs with deep ties.

Pittman and Beamer said they see the comparisons in the current state of their programs.

“When Shane got the job over there, I called him and I obviously congratulated him,” Pittman said. “It was a big deal for him. He was, again, like I was, emotional when he went into the stadium. I remember watching that video of him. It just meant something to him. I do think there’s something to be said for that.”

Beamer was a special teams coordinator and a defensive assistant at South Carolina from 2007-2010 under the legendary Steve Spurrier, laying the ground work for his return.

Pittman did the same at Arkansas as associate head coach and offensive line coach from 2013-15, earning a raise and promotion from Bret Bielema before he coached a game due to interest from Alabama Coach Nick Saban.

The Gamecocks went a somewhat-surprising 7-6 in Beamer’s debut last year, with wins over Florida and Auburn, after inheriting a floundering program from Will Muschamp.

Beamer noted the Razorbacks are trying to climb in the SEC West just like the Gamecocks are in the SEC East.

“In this league, everybody’s good. It’s a battle week-in and week-out. But certainly it’s two proud programs that we as head coaches, Sam and I both, we really believe in and believe in the potential of these programs as well.”

Both teams opened with solid, yet unspectacular wins last week. The Razorbacks outlasted No. 23 Cincinnati 31-24 and the Gamecocks unleashed magical special teams play all over Georgia State in a 35-14 victory.

Former Arkansas coach Houston Nutt, now a studio analyst for CBS Sports, had a 7-3 record against the Gamecocks from 1998-2007. His teams went to bowl games every year they beat South Carolina, including three Cotton Bowls, a Citrus Bowl and two SEC title games, and didn’t make the postseason in two of the three years they lost to the Gamecocks.

“When you look at South Carolina and Arkansas, if you look at the offseason, both teams have a fan base that’s very excited about the year,” Nutt said.

“Beamer won a bowl game and Coach Pittman won a bowl game. You know what that does. When you win a bowl game, there’s excitement in recruiting and the offseason. Everything’s a little bit better.

“Both these teams … this is a critical game. It’s a critical one because you don’t want to lose this one. I think this will do a lot for the year.”

Neither team has won an SEC championship. The Razorbacks represented the SEC West in the title game in 1995 under Danny Ford and in 2002 and 2006 under Nutt.

South Carolina had just five upper-division finishes and no titles in the SEC East between 1992 and Spurrier’s arrival. However, Spurrier guided the Gamecocks to the SEC East crown in 2010, a year Arkansas pounded them 41-20 on the road under Bobby Petrino. South Carolina fell 56-17 to eventual BCS champion Auburn in the SEC Championship Game that season.

Ford, a College Football Hall of Famer who is living on his farm outside Greenville, S.C., said neither program was prepared for what awaited them in the SEC.

“And probably financially they weren’t ready. They might have thought they were and they could have been, but they didn’t know how to do it. … Thank goodness they did. And now they can. They have the facilities. They have the support. They have the backing.”

Even so, the years of contending in the conference have been sporadic for both programs, but particularly the Gamecocks. Former Arkansas coach Lou Holtz brought the Gamecocks back to respectability in 2000 with a 5-3 SEC mark, two games behind Spurrier’s Florida team, after South Carolina had gone 0-8 in 1998 and 1999. Holtz, 0-11 in his first season with the Gamecocks in 1999, guided the program to back-to-back Outback Bowl wins and top 20 finishes in the AP poll the next two years.

None of the current players on either team was around for the last meeting between the schools in 2017. Despite the unfamiliarity, Arkansas players detect premier SEC talent on the South Carolina roster.

“I mean, they’re in the SEC, just like we are,” center Ricky Stromberg said. “They’re just on the other side. … I’m looking at it as we’re going to play a good SEC team. So we’re taking the right approach to this week, because we know we’ve got a tough SEC team in front of us.”

The Razorbacks once held a lead over South Carolina in all-time SEC records, but the Gamecocks slipped ahead in the past decade as Arkansas floundered until Pittman’s arrival. South Carolina is 103-138-1 (.428), taking into account NCAA imposed forfeits and vacated games, while Arkansas is 98-142-2 (.409). That slots the Gamecocks and Razorbacks 10th and 11th among the current membership in SEC winning percentage, ahead of Mississippi State (.354), Kentucky (.322) and Vanderbilt (.248).

The series has featured six games decided by a touchdown or less, but many more blowouts, like the Hogs’ 45-7 rout under interim coach Joe Kines in their first meeting on Sept. 12, 1992, the week after Arkansas Athletic Director Frank Broyles fired Jack Crowe after a 10-3 home loss to The Citadel.

In 1995, Arkansas running back Madre Hill scored a school-record six rushing touchdowns in a 51-21 stomping of the Gamecocks, propelling Ford’s third-year club to the SEC West title.

Carlos Hall imprinted his name in Arkansas annals with a blocked field goal in the final seconds to preserve a 10-7 Razorback upset over the No. 9 Gamecocks in 2001 at War Memorial Stadium in Little Rock.

Beamer was an assistant on the 2007 South Carolina team that lost 48-36 at Razorback Stadium on the night the field was dedicated to Broyles. That game was even more memorable for Darren McFadden’s SEC-record tying 321 rushing yards and the NCAA tandem rushing record of 487 yards by McFadden and Felix Jones (166). That record was broken by North Carolina’s Michael Carter (308) and Javonte Williams (236) two seasons ago in a 62-26 win over Miami.

“I think they ran for like 500 yards apiece,” Beamer said.

“Coach Spurrier was funny after the game,” Nutt said before relating what Spurrier told him: “ ‘Well, we didn’t give you much competition. … We couldn’t stop McFadden.’

“He was grumbling. That was a great night. Darren was hitting on all cylinders. The offensive line was super. That was the night they dedicated the stadium to Coach Broyles. You had a couple of things that worked out just right and that was a good feeling to go up and down the field like that.”