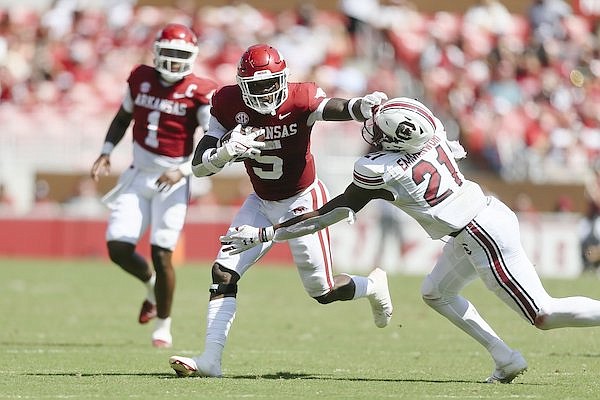 Arkansas running back Raheim Sanders (5) carries the ball during a game against South Carolina on Saturday, Sept. 10, 2022, in Fayetteville.

FAYETTEVILLE — Four Arkansas players ran for touchdowns and the 16th-ranked Razorbacks rushed for 295 yards during a 44-30 victory over South Carolina on Saturday in the conference opener for both teams.

Arkansas running back Raheim “Rocket” Sanders rushed for a career-high 156 yards on 24 attempts and scored the Razorbacks’ first two touchdowns on runs of 1 and 11 yards before halftime. Sanders had a long run of 47 yards and also had a 45-yard run overturned due to a holding penalty away from the play in the third quarter.

Sanders recorded the 11th 100-yard rushing performance by an Arkansas player against South Carolina. He has rushed for more than 100 yards in both games this season.

More from WholeHogSports: Catalon needs surgery, out for season

The Razorbacks averaged 4.5 yards on 66 rushing attempts. They leaned heavily on the run game to build a 21-3 lead when Rashod Dubinion scored on a 1-yard touchdown run with 8:13 remaining in the second quarter.

Arkansas scored on its first three offensive possessions that covered 63, 75 and 61 yards.

"I think everybody in the stadium felt good on the first three possessions when we...made close fourth down (conversions), third downs. None of them were really great big plays involved in there. It was just kind of churning four and five yards out at a whack."

South Carolina (1-1, 0-1) cut the lead to 21-9 at halftime when Marshawn Lloyd scored on a 7-yard touchdown run late in the second quarter. The Gamecocks pulled within 21-16 on a 62-yard touchdown pass from Spencer Rattler to Antwane Wells early in the third quarter.

Arkansas quarterback KJ Jefferson scored on a 2-yard keeper on the first play of the fourth quarter to put Arkansas ahead 28-16, and the Razorbacks quickly extended their lead after Lloyd was stripped by Latavious Brini on the second play of the ensuing South Carolina drive. Arkansas cornerback Hudson Clark recovered the ball at the Gamecocks’ 36.

Jefferson threw a 23-yard touchdown pass to Warren Thompson in the back of the end zone five plays later to give the Razorbacks a 35-16 lead.

Jefferson completed 18 of 21 passes for 162 yards and rushed for 67 yards on 19 attempts before a game-ending kneel down. He was sacked twice.

Trailing by 19, South Carolina drove to the Arkansas 17, but Rattler was intercepted by Dwight McGlothern in the end zone with 10:57 remaining. It was McGlothern’s second interception in two games since transferring from LSU and one of three turnovers forced by the Razorbacks, who did not commit a turnover.

AJ Green scored on a 1-yard touchdown run two plays later to put the Razorbacks ahead 42-24.

South Carolina's Jaheim Bell scored a 1-yard touchdown run with 3:21 to play to pull the Gamecocks within 42-30.

Following an Arkansas punt, Rattler was flagged for intentional grounding in the end zone to give the Razorbacks a safety with 1:33 to play. Jordan Domineck was credited with a sack on the play — one of six Arkansas sacks during the game.

"We made a lot of big plays on defense — a lot of sacks, hurries, this, that and the other, and we gave up a lot. We had three hands to the face (penalties) and things like that, which we certainly haven't had that in practice, but we had it out here today. We've got to clean that up, but I thought the defense made some big plays."

Rattler completed 23 of 38 passes for 361 yards in his first road start since transferring from Oklahoma. The Gamecocks fell to 0-5 in SEC road games under second-year coach Shane Beamer.

Arkansas has won seven of its last eight games in Fayetteville.

"Give credit to Arkansas," Beamer said. "They've got a heck of a football team and they showed that today.

"Today, it wasn't good enough on the road, but I'm proud of how our guys fought."

The Razorbacks are scheduled to host Missouri State (2-0) next Saturday at 6 p.m. The Bears, ranked fifth nationally in the Football Championship Subdivision, are coached by Bobby Petrino, who went 34-17 as Arkansas’ coach from 2008-11.