'You can count on him': Pool's big plays key Hogs' 2nd win 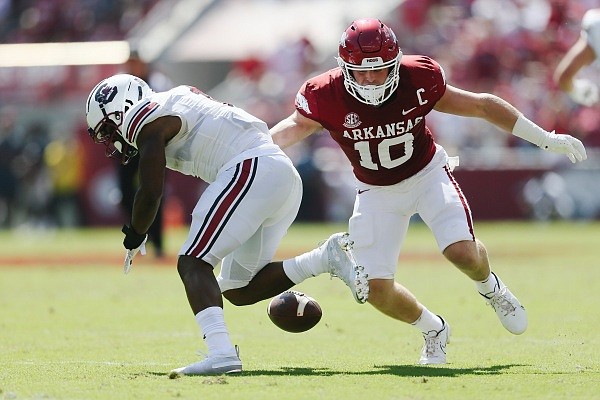 Arkansas linebacker Bumper Pool breaks up a pass intended for South Carolina's MarShawn Lloyd (1) on Saturday, September 10, 2022, during the second quarter of a football game at Donald W. Reynolds Razorback Stadium in Fayetteville.

FAYETTEVILLE — Bumper Pool became Arkansas’ leader in kickoff return yards against South Carolina on Saturday, but the linebacker's return was not the most noteworthy play he made.

The Razorbacks jumped to a 21-3 lead in the second quarter before the Gamecocks mounted a bit of a comeback. Arkansas held a 21-16 edge with less than seven minutes to play in the third quarter when Pool jumped into action.

On a day when the Razorbacks’ defense made a handful of impact plays, Pool was responsible for the one that aided No. 16 Arkansas in creating separation in its 44-30 victory over South Carolina. With the Gamecocks facing third-and-7 at their 22, Pool chased and sacked quarterback Spencer Rattler for a loss of 15 yards.

The Razorbacks scored a pair of touchdowns in the next 2:46 and cruised the rest of the way.

“For him to have the sack, he’s just … you can count on him,” Arkansas coach Sam Pittman said. “That’s sort of how Grant (Morgan) was last year. You can count on him. Bumper has been that way for the three years I’ve been here.

“I’m really happy for him, (and) especially those guys that are fifth-year seniors that come back and have success.”

Fresh off an SEC co-defensive player of the week honor after the season-opening win over Cincinnati, Pool finished second on the team with 7 tackles against the Gamecocks, along with 1 pass breakup and 1 quarterback hurry.

Pool’s sack was the first solo of his career. He entered the game with one-half sacks against Auburn in 2019 and Georgia in 2020.

Alabama transfer Drew Sanders, who had his breakout game against the Gamecocks with 10 tackles, including 3 for lost yardage and 2 sacks, was impressed with his running mate’s performance.

“That was huge,” Sanders said. “Any time we can come away with a sack, that shifts the momentum. It’s a big game-changing play.”

Then, in the fourth quarter as South Carolina attempted to steal possession back with an onside kick, Pool showcased some open-field ability with the ball in his hands. He snared the football out of the air following a perfect hop and raced 34 yards toward the north end zone.

Pool was brought down at the Gamecocks’ 9. Although he did not score, it was a unique moment worth celebrating.

“He’s so funny because whenever he got the onside kick and ran it down there, he came over and said, ‘Hands, baby,’ and he punched me in the gut,” Pittman said. “I’m just so proud of him. He bleeds Arkansas.

“A lot of kids in (the locker room) do, but he’s one of them that really does.”

Quarterback KJ Jefferson and running back Raheim “Rocket” Sanders, who combined to rush for 223 yards and three touchdowns, thought Pool was going to score on the play. Jefferson said he joked with Pool after the game about not reaching the end zone.

“He said, ‘They came up pretty quick,’” Jefferson said. “I wanted Bumper to score, man. I mean, that's a good look. Just being able to have your starting linebacker out there on the hands team and actually go do what he did … that showed leadership and positivity in his role.”

Through two games, Pool has 20 tackles. And Saturday marked the 28th time in his career he finished with at least seven stops in a game.

“It’s really cool to see guys like that work so hard and then decide to pass up the NFL for a year to come back,” Pittman said. “We haven’t beaten the Green Bay Packers; we’re 2-0.

“But it’s nice for those things to happen to guys that come back.”