Hogs all business from the beginning 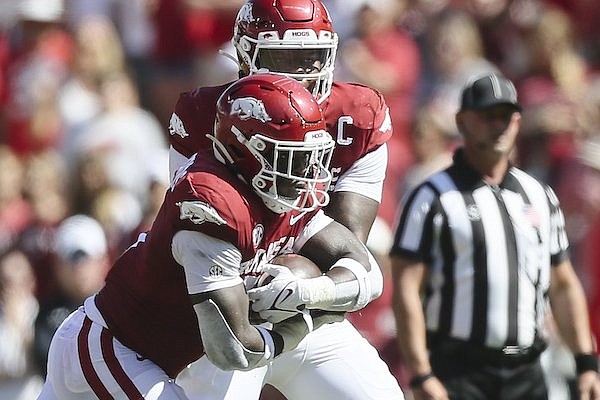 Arkansas quarterback KJ Jefferson (1) hands off to running back Raheim Sanders during a game against South Carolina on Saturday, Sept. 10, 2022, in Fayetteville.

Every player was in a suit, part of a preseason deal with Dillard’s, most of them dark blue.

Game faces were firmly in place. No laughs. No grins. No horseplay.

It was almost time to go to work and the No. 16-ranked Razorbacks were not taking unranked South Carolina lightly.

The Hog chip was in its place, on their shoulders.

Their only real mistakes in the first half was penalties, but they glared 72 yards.

It was something that hurt in the second half and could have cost them the game, but they settled down and the game wasn’t as close as the 44-30 score might indicate.

The Razorbacks scored on their first three possessions on three touchdown runs, two by Raheim Sanders, and they led 21-9. The only time they didn’t score in the first half was a missed 50-yard field goal.

It was obvious the Gamecocks had to do something in the second half to stop Arkansas’ rushing attack, which had accounted for 126 of the Hogs 241 total yards.

They threw everything but the benches at the Hogs and managed to stop them on their first two possessions. But on this day, it would not be sustainable.

Midway through the third quarter, South Carolina drove 88 yards, highlighted by a 63-yard touchdown pass, to cut the score to 21-16.

It made the loud crowd even louder, but the Hogs punted and the Gamecocks took over at their 19 … but not for long.

Bumper Pool sacked Spencer Rattler for a 15-yard loss on third down.

Minutes later, Pool would have a Hog Heaven moment.

On a South Carolina punt, Arkansas was called for holding and took over at its 41 instead of the Gamecocks’ 48.

Sanders carried three straight times for 12 yards and then peeled off a 46-yard run to the South Carolina 1. Flag. Holding, Arkansas.

The Razorbacks didn’t panic, didn’t abandon their game plan and put together a touchdown drive that had two pass completions.

South Carolina tried to mount something, but Hudson Clark grabbed a fumble, and after four straight Arkansas runs the Gamecocks got caught flat-footed when KJ Jefferson hit Warren Thompson in the back of the end zone for another touchdown and a 35-16 lead.

Rattler then got picked in the end zone by Dwight McGlothern and the Hogs pounded the ground but went three and out.

On first down, Rattler passed for 64 yards and three plays later it was 35-24 and with 6:25 to play. The visitors, who never gave up, tried an onside kick.

Pool, a linebacker who is part of the good hands team, took it and was full speed returning it to the 9. Two plays later, AJ Green scored a touchdown and the only thing missing on this work day was someone turning the lights off.

For the day, Jefferson completed 18 of 21 passes for 162 yards and a touchdown, but the Razorbacks never intended to be Air Arkansas against the Gamecocks.

From day one, the plan was run, run, run and then run some more.

The Razorbacks ran 65 times for 297 yards and 5 touchdowns.

They owned the time of possession by almost 10 minutes, which was a critical part of their game plan.

It was definitely improvement in every aspect from game one to two except for penalties.

That wasn’t Alabama, Texas A&M, Ole Miss, Mississippi State, Auburn or even LSU at Reynolds Razorback Stadium — and against those teams, no one can afford to shoot themselves in the foot.