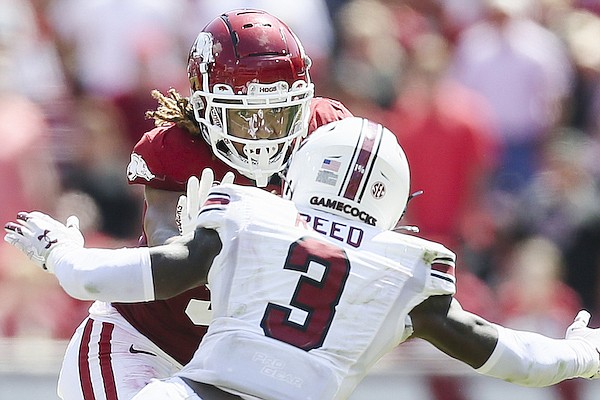 Recruiting in college athletics is no longer just for high school and junior college athletes with the introduction of the NCAA transfer portal in October 2018.

University of Arkansas football Coach Sam Pittman has mined the portal since arriving in Fayetteville in December 2019. Quarterback Feleipe Franks was a key addition from Florida for the 2020 season.

Key contributors in the 2021 season were defensive line transfers Markell Utsey, Tre Williams and John Ridgeway. Receiver Warren Thompson was a nice addition for the offense and is expected to be one of the top players at his position this season.

Arkansas’ 2022 class of transfers has been widely praised as one of the best hauls in the nation, and that showed in the Hogs’ 31-24 season-opening victory over Cincinnati.

Razorback general manager Butler Benton, along with director of football management Charlie Williams and assistant to the head coach Brian Overton, identify, watch film and research transfers in the portal before getting with coaches on a plan of action to recruit the players.

Haselwood, who was rated The Athletic’s 34th-best transfer for the 2022 class, hauled in a 19-yard touchdown pass from quarterback KJ Jefferson to give the Hogs a 21-7 cushion with eight minutes left in the third quarter.

Landers, a senior, and Haselwood, a junior, combined for 85 receiving yards and accounted for 38% of Arkansas’ 223 receiving yardage in the game, while the six receptions represented 33% of the catches. The two played a total of 101 snaps.

Landers transferred to Fayetteville from Toledo and Haselwood left Oklahoma for the Hogs. Haselwood was a 5-star recruit and the No. 1 prospect at his position in the nation out of high school in the 2020 class by all three major recruiting services.

While the Hogs saw nice production from transfers on the offensive side, Arkansas’ defensive transfers made an even bigger impact with six making significant contributions against the Bearcats.

Razorback defensive transfers recorded 24 of 74 tackles, which amounted to 32% of the team’s total while playing 282 snaps.

They also accounted for 2 1/2 of the three sacks, 3 1/2 of eight tackles for loss, one of two forced fumbles and the only recovered fumble. The lone interception was returned 51 yards by junior cornerback Dwight McGlothern, 6-2, 181, that set up the Hogs’ three-play, 29-yard scoring drive to put Arkansas up 7-0 with 55 seconds left in the first quarter.

McGlothern, a former LSU cornerback, was a 4-star prospect in the 2020 class before signing with the Tigers. He also had four tackles and a pass breakup against Cincinnati.

Former Alabama linebacker Drew Sanders, 6-5, 233, recorded five tackles, a sack and one tackle for loss. The Athletic rated the junior the seventh-best transfer out of more than 2,000 FBS transfers.

Former Georgia Tech defensive end and Hog senior Jordan Domineck, 6-3, 251 was named Co-SEC defensive lineman of the week after recording two tackles, one sack for a loss of 10 yards, one forced fumble and one fumble recovery.

The sack involved him stripping the ball from quarterback Ben Bryant and scooping the ball up before being tackled at the Cincinnati 49 early in the fourth quarter. The Hogs scored two plays later to extended their lead to 31-17.

Hampton, 6-1, 314, had three tackles and a tackle for a loss. Former Georgia safety Latavious Brini, 6-2, 215, recorded five tackles, while former LSU defensive end Landon Jackson, 6-7, 274 had five tackles, a half of a sack and a quarterback hurry.

Pittman also praised kicker Jake Bates, who transferred from Texas State, for having five touchbacks on six kickoffs in the season opener.

The defensive transfers had 22 tackles in Saturday’s 44-30 victory over South Carolina. The 22 tackles represented 36% of the 61 total team tackles.

Haselwood had five catches for 30 yards, while Landers caught four passes for 45 yards. Their combine nine catches were 50% of the 18 total receptions while their combined 75 yards was 46% for the 162 total receiving yards.