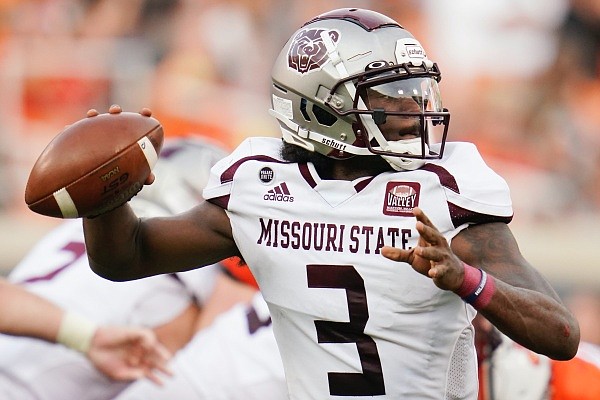 FAYETTEVILLE — There will be two top-10 teams at Reynolds Razorback Stadium on Saturday.

The Razorbacks and the Bears are scheduled to kick off at 6 p.m. on Saturday in Fayetteville.

Missouri State (2-0) is coming off of a notable win in the Football Championship Subdivision, 35-30 at home over then-No. 14 Tennessee-Martin last Thursday. The Bears were eliminated by UT-Martin in the first round of the FCS playoffs last season.

Of the teams ranked ahead of Missouri State this week, three — No. 1 North Dakota State, No. 2 South Dakota State and No. 4 Montana State — have played in the past two FCS national championship games. Montana is ranked third.

The Bears are 0-2 in games against teams from the Football Bowl Subdivision under Petrino, with losses of 48-0 at Oklahoma in 2020 and 23-16 at Oklahoma State last season. Arkansas competes as a member of the FBS.

The Razorbacks have won 17 consecutive games against teams from the FCS (formerly I-AA). Arkansas’ only loss to a team from that level came in the 1992 season opener, 10-3 to The Citadel in Fayetteville.

Arkansas last played a ranked FCS team in 2012 when the Razorbacks defeated No. 22 Jacksonville State 49-24 in the season opener. Jacksonville State was coached by Jack Crowe, who 20 years earlier was fired as Arkansas' coach the day following the loss to The Citadel.

Missouri State is winless in seven previous games against Arkansas. The teams’ most recent meeting was in 2011 — Petrino’s final season with the Razorbacks — when Arkansas won 51-7 in Fayetteville.

The teams are scheduled to play again in the 2025 season opener.