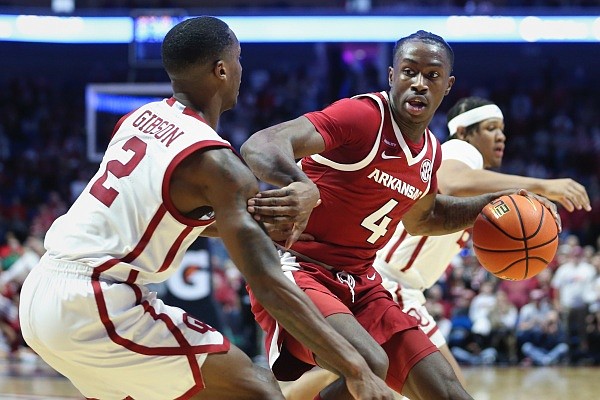 Arkansas guard Davonte Davis (4) drives past Oklahoma guard Umoja Gibson (2), Saturday, December 11, 2021 during the first half of a basketball game at the BOK Center in Tulsa.

FAYETTEVILLE — The TV designation and tip-off time have been set for Arkansas’ men's basketball game against Oklahoma later this year.

In a post to his Twitter account on Tuesday, fourth-year Razorbacks coach Eric Musselman tweeted a graphic that stated the teams’ meeting at BOK Center in Tulsa on Saturday, Dec. 10 will begin at noon Central and air on ESPN2.

This year's game is the second in what could be a four-game series between the programs. According to the terms of the contract, the teams are guaranteed to play at least twice in Tulsa and could opt to play up to two more neutral-site games there.

The series has been branded the Crimson & Cardinal Classic, a reference to the schools’ colors.

The Sooners, who will join the Southeastern Conference no later than the 2025-26 basketball season, last December handed then-No. 12 Arkansas an 88-66 loss, its first of the 2021-22 season.

Arkansas leads the all-time series with Oklahoma 16-13. The Razorbacks are 5-1 against the Sooners at neutral sites.