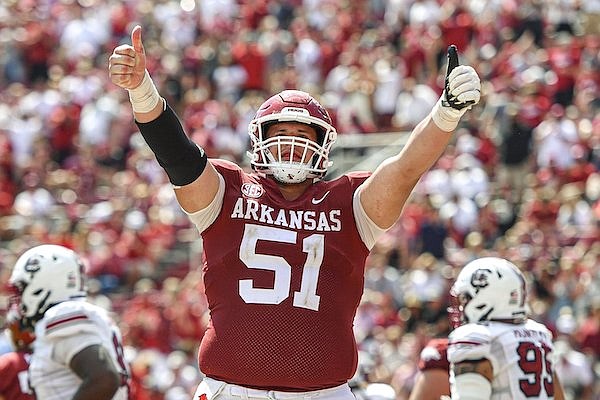 Arkansas center Ricky Stromberg (51) gestures to the crowd following a touchdown during a game against South Carolina on Saturday, Sept. 10, 2022, in Fayetteville.

Stromberg, Arkansas’ senior center, helped pave the way for not only a 295-yard, 5-touchdown rushing performance, but a 44-30 victory over the Gamecocks to kick off SEC play. Two days later he was named SEC co-offensive lineman of the week for his performance.

It was a well-deserved honor in Arkansas coach Sam Pittman’s estimation.

“To be honest with you, and Ricky will tell you the same thing, I don’t think he played some of his best ball against Cincinnati. There’s reasons for that — guys you’re playing and all that kind of stuff,” Pittman said this week. “But I thought he had one of his better games Saturday.”

After playing each of the Razorbacks’ 73 offensive snaps in a physical Week 1 win over Cincinnati, Stromberg came back and showcased improved play. He was in for all 88 of Arkansas’ offensive snaps against the Gamecocks.

It is likely the kind of game he envisioned after Pittman challenged his front to control the line of scrimmage and South Carolina’s defensive line.

As the Razorbacks gear up for their Saturday home game against Missouri State, which is set to kick off at 6 p.m., and the toughest stretch of their schedule in the weeks that follow, Stromberg has shown himself to be one of the SEC’s best linemen regardless of position.

“To see his improvement over the last two seasons and two games has been dramatic,” Pittman said. “I think he’ll be a guy that can play in the NFL. He's tough.

“I think he'll play for a long time.”

Pittman praised offensive line coach Cody Kennedy, initially brought to Arkansas to coach tight ends, for assisting Stromberg in his development. Their bond and trust in one another is a critical aspect, he added.

Pittman has also seen an uptick in Stromberg’s positional knowledge and overall football IQ as he has matured.

“His physicality (stands out),” Pittman said. “He’s very quick off the ball, understands the defensive structures, and I really like him. A wonderful, wonderful kid, and certainly glad he's on our team.”

According to Pro Football Focus, the Tulsa native’s overall offense grade of 76.4 ranks 16th in the FBS among offensive linemen and 10th for centers. The mark is tops among SEC centers.

A preseason All-SEC first-team selection by Phil Steele, Stromberg finished last season with a grade of 76.3, which ranked 28th in the FBS. This year he is off to a strong start just weeks after hyperextending an elbow in one of the Razorbacks’ preseason scrimmages.

“He kind of runs that offensive line,” Pittman said. “And he has a lot of respect, not only from the coaching staff, but from the players on the team.”

He surely has the respect of Cincinnati and South Carolina’s defensive tackles, too.