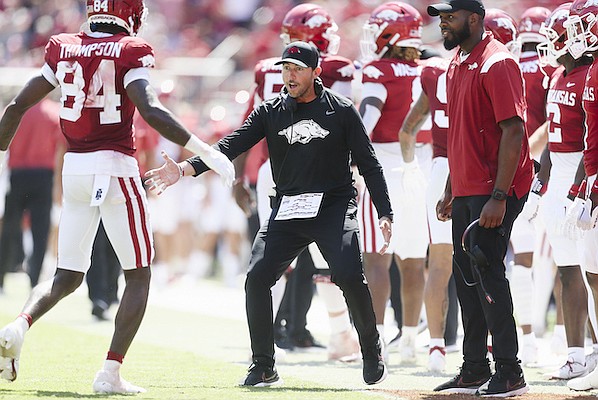 FAYETTEVILLE — The beauty of the Kendal Briles’ offensive attack for the University of Arkansas this season has been its multiplicity and diversity of talent behind a veteran, crafty offensive line through two games.

The Razorbacks used the inside and outside zone read schemes to huge effect against South Carolina in a 44-30 victory last week, piling up 300 rushing yards before quarterback KJ Jefferson took a knee on the final snap for a 5-yard loss.

Raheim “Rocket” Sanders has been the workhorse, with 136.5 rushing yards per game to lead the SEC and rank fourth in the country. But Jefferson and an array of other skill-position players have contributed mightily to the attack, which will face FCS Missouri State on Saturday at Reynolds Razorback Stadium.

The sum of it is Arkansas, which led Power 5 schools and ranked seventh nationally with 227.8 rushing yards per game last season, has racked up an average of 259.5 rushing yards through two games to rank eighth in the FBS.

“I think Kendal’s called two really good games,” Arkansas Coach Sam Pittman said. “I thought he had South Carolina a little bit on edge with some of the things he was doing, some of the plays we were running, the personnel that he was using. I think they’ve had great game plans over there on offense.”

The Razorbacks haven’t passed the ball a ton, but when they do the efficiency is eye-opening.

While Arkansas is 11th in the SEC with 192.5 passing yards per game, the Razorbacks are first in the conference in efficiency with a rating of 173.49. A strong efficiency number speaks to a high completion percentage, a strong touchdown-to-interception ratio and yards per pass attempt.

Jefferson checks all those boxes. The junior has not thrown an interception versus four touchdowns, has completed 76.6% of his passes (36 of 47) and he averages 8.2 yards per attempt, which is not among the FBS leaders but is solid nonetheless. Jefferson’s passing efficiency mirrors the team’s at 173.49, which is 18th in the nation and third in the SEC behind LSU’s Jayden Daniels (179.04) and Georgia’s Stetson Bennett (176.95).

Back on the ground game, ESPN pointed out last week the duo of Jefferson (6-3, 242 pounds) and Sanders (6-2, 227) is the heaviest starting quarterback-tailback tandem in the country at 471 pounds, which slots in perfectly with Pittman’s plan to go big and go strong.

While those two and others are capable of bringing the hammer, the Razorbacks frequently got their wideouts on the edges with sweeps and “strike” passes, the ones where Jefferson takes a Shotgun snap and pops the ball in front of him to a motioning player with a head of steam.

“Coach Briles does an awesome job of calling up all sorts of different plays, run and pass plays,” offensive guard Brady Latham said. “It’s fun kind of using that variety on Saturdays.”

Sanders, with 44 carries, and Jefferson (37) have far outpaced other ball carriers in attempts, but five other players have gotten in on the rushing action.

“Honestly, I’d say it just opens up more. It just really opens up our offense more really,” Green said of the variety of ways Briles has gotten the ball to play makers. “Being able to spread the ball around to the receivers, running backs, second-string running backs, it’s just good for us honestly.

“And I think it’ll just spread the defense out more for us so we’ll be able to get more openings and more big runs and set up more plays off those.”

Missouri State Coach Bobby Petrino said he is aware of what the Bears’ defense is up against, particularly with the two most frequent ball carriers.

“He’s big, he can throw the ball, and he can throw it deep,” he said of Jefferson. “He’s an accurate passer. He’s a great runner, so our ability to get people to the ball when he runs it and tackle him is key.

“Then his biggest uniqueness, I guess you would say, is you can have free rushers and you can get guys right there to sack him and he breaks the tackle and he runs out of it.”

“Rocket’s big and physical and last week’s game he broke a bunch tackles,” he said. “So you’ve got to be able to get a number of guys to the football and wrap up and be gap sound. And even sometimes teams are gap sound and he breaks a tackle and makes a big play. So it’s a good challenge for us.”

Pittman congratulated the offensive line for dominating Saturday’s game and the receivers for their work in the multi-pronged attack, plus their blocking.

“Our offensive line is playing well,” he said. “That includes Trey Knox and Nathan Bax. Our wideouts are blocking well on the outside, but Kendal’s really using the personnel that we have with the short throw game almost as a run, if you will. Really done a nice job, really called good games.”