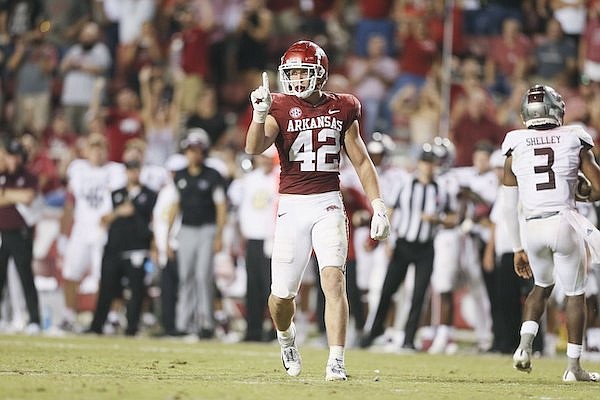 Arkansas linebacker Drew Sanders celebrates a sack during a game against Missouri State on Saturday, Sept. 17, 2022, in Fayetteville.

FAYETTEVILLE — Arkansas safety Simeon Blair loves hearing the roar of the Reynolds Razorback Stadium crowd when it comes within a few seconds of him dropping into pass coverage.

It typically signifies to the captain of the secondary that Arkansas has put quality pressure on the opposing quarterback and dropped him for a loss. Blair heard that growingly familiar pop from the home fans eight times Saturday during the No. 10 Razorbacks’ 38-27 victory over Missouri State.

“It helps me not having to cover for so long,” said Blair, who finished with 10 tackles. “That’s how I know probably Drew (Sanders) or (Jordan Domineck) probably done got to him. It’s just an incredible thing to do, incredible for this program to have pass rushers like we have — Drew, JD, a lot of guys on the D-line.

“Everybody just works together, and those guys get to reap the benefits, so it’s great to see that.”

Arkansas entered the week in a seven-way tie for fifth place nationally with nine sacks. Over the course of the Week 3 game that was much closer than many anticipated, the Razorbacks’ pass rush overwhelmed the FCS-level Bears, and they nearly doubled their season sack total.

Arkansas’ eight sacks of Missouri State quarterback Jason Shelley are its most in a game since a 24-7 victory at Auburn in 2012. And the Razorbacks’ 14 sacks in the last two weeks match the program’s figure in 10 games during Sam Pittman’s first season as head coach.

Sanders, the electrifying transfer from Alabama, led the way with 2.5 sacks, pushing his season total to 5.5. He is a half-sack shy of tying Tre Williams’ team-leading mark from last season.

“The quarterback is scared of Drew,” Blair jumped in when Sanders was asked to assess his opening three games as a pass rusher.

Domineck soon chimed in, “If that ain’t the truth.”

“It’s fun playing in this defense,” Sanders said. “We’ve got a lot of ways to get after a team and especially impact the quarterback. Just how (defensive coordinator Barry) Odom is scheming up everything, it’s fun to play in, and it provides a lot of opportunities.

“It’s our job to take advantage of it.”

That they did. In addition to Sanders’ numbers, Domineck, a Georgia Tech transfer who early in camp was made an example when Pittman said the effort exhibited in a rep was the worst by a defensive lineman in a century, continued to increase his stock as a playmaker. Domineck recorded two sacks and moved his season total to four.

The fairly consistent pushing of the pocket played a key role in Arkansas’ turnaround in the game. Each of its four second-half sacks came after the Razorbacks trimmed Missouri State’s lead to 27-24 on KJ Jefferson’s 73-yard touchdown pass to running back Raheim Sanders.

“We had to. We're fighting our butt off, but we had to pressure him,” Pittman said. “(Shelley is) hard to tackle, he's a good player. Going into that game, that was exactly the game plan. We were going to put pressure on him because we knew how good their receivers were.

“We just couldn't contain him. He'd get outside the pocket and make plays with his feet.”

Following Sanders’ touchdown, Domineck and Jackson teamed up for a sack on first down, then Sanders dropped Shelley for a loss of four yards on the next snap. Two plays later, Bryce Stephens flipped the game on its head with an 82-yard punt return for a score.

It gave the Razorbacks their first lead of the game at 31-27. Williams and Sanders capped the night with sacks on Missouri State’s final two series.

Pittman said rushing the passer is Drew Sanders’ forte, and his strength aides him in bursting into the backfield. His 5.5 sacks are already more than what the Razorbacks’ sack leaders in 2017, 2019 and 2020 posted.

“Before he transferred, he was a line-of-scrimmage guy,” Pittman said. “I like what we’re doing with him. We’re putting him on the edge, putting him inside over the guard. But he’s just a really good player and he has a knack to rush the quarterback.

“Barry and (linebackers coach) Mike (Scherer) have drawn up some really nice packages for him.”

Perhaps no player on Arkansas’ defense through three weeks has made more of his snaps than Domineck. In each of his games as a Razorback he has made a key play and proven he can contribute to a winning defense.

“It’s a great feeling to be able to impact the team,” he said. “I’m out here to play my heart all the way out and do what I need to do. It’s really just the defensive scheme and everybody else is setting it up for me. If you saw that sack at the end of the (first) half, Drew really had him first.

For the first time in a long time, the Razorbacks have a legitimately intriguing battle for sack supremacy.