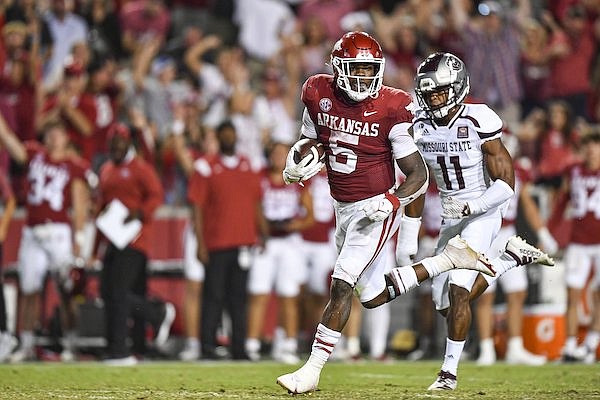 Arkansas running back Raheim Sanders runs for a touchdown on a reception during the fourth quarter of a game against Missouri State on Saturday, Sept. 17, 2022, in Fayetteville.

FAYETTEVILLE — Bobby Petrino didn’t come away with a Razorback hide on his heavily-hyped return to the University of Arkansas campus on Saturday.

But his Missouri State Bears put a major scare into the No. 10 Razorbacks before a revved-up crowd of 74,133 at Reynolds Razorback Stadium.

Raheim Sanders and Bryce Stephens had breakaway touchdowns within a three-minute span in the fourth quarter as Arkansas (3-0) overcame a 17-point deficit to surge past the Bears 38-27.

“We’re just so fortunate to win,” Arkansas Coach Sam Pittman said. “These games like this, if you’re not playing well or the other team’s playing well or whatever the situation is, you’re trying to fight and claw to get out with a win.

“There was several different times in the game it looked like we weren’t going to. Our kids just kept fighting and clawing, and to come out with an 11-point win says a lot about the culture of our program and our kids.”

Missouri State (2-1) came out loose and aggressive and seized a 17-0 lead early in the second quarter, stunning the turnover-prone Razorbacks, who lost two fumbles in the first half, which the Bears turned into 10 points.

Petrino, who led Arkansas to a 34-17 record between 2008-11, and Missouri State came to town loaded with an explosive offensive playbook to carve up the dinged-up Arkansas secondary, including a brilliant fourth-and-1 call for a tie-breaking 47-yard touchdown late in the third quarter.

Petrino said he was proud of his team and coaches for putting together a quality game plan.

“We had good practices, we came in and competed extremely hard, had a good plan and were able to jump up and get a lead,” Petrino said.

“I knew it was going to be hard to hold on to it. They’ve got really good players, really good coaches, so we knew they were going to make a run back. I was encouraged when we answered it and went back and got another touchdown. But eventually they wore us down, made a lot of plays and ended up beating us.”

Arkansas racked up a 597-409 edge in total offense, which helped offset a 3-0 loss in the turnover battle.

Missouri State quarterback Jason Shelley completed 24 of 43 passes for 357 yards and a touchdown, carving big chunks of an Arkansas secondary that was down three key players.

After Cam Little’s 27-yard field goal tied the game at 17-17 with 5:36 left in the third quarter, the Bears had an immediate answer.

Missouri State quickly moved to the Arkansas 47. On fourth and 1, Shelley ran play action and as the Hogs crashed in to stop the run, he threw to an uncovered Ty Scott for a 47-yard touchdown.

But the Razorbacks had some defensive responses with eight sacks, their highest total since an eight-sack game in a 24-7 upset at Auburn in 2012.

Arkansas overcame its largest deficit in a nonconference game since Petrino helped mastermind a rebound from an 18-point deficit in a 42-38 win over Texas A&M in 2011.

“We had never been down this season, so just being able to just not point the finger and just come together, keep encouraging each other, keep everybody uplifted,” Arkansas quarterback KJ Jefferson said of the team’s response to trailing by 17. “No bad body language. Just being able to have an elite mindset.”

Pittman said the Hogs could not afford to panic and point fingers after trailing big.

“Can you imagine walking in here getting beat tonight?” he said to members of the media. “I would say, ‘You want to trade spots?’

“I think there’s a difference in looking forward to next week and not giving enough respect for the team you’re playing. I think that. I just think Missouri State outplayed us to be perfectly honest with you.”

Trailing 27-17 early in the fourth quarter, Sanders, who goes by the nickname “Rocket,” turned a shovel pass into a tackle-breaking 73-yard touchdown to turn it back into a one-score game.

“That’s why his momma named him ‘Rocket,’ ” Pittman said.

On the next Missouri State possession, the Razorbacks posted two sacks of Shelley to blow up the series.

Punter Grant Burkett unleashed a booming 57-yard punt and Stephens made the Bears pay. The sophomore got an initial break when Sam Mbake held off the Missouri State punter, then the speedy Stephens weaved through traffic, hit the Arkansas sideline and raced 82 yards for a touchdown for the Razorbacks’ first lead of the game at 31-27 with 9:16 remaining.

“I was on the sideline and I just knew we needed a momentum play, so I had to make one,” Stephens said.

Arkansas completed its 21-point rally in the final quarter on quarterback KJ Jefferson’s 1-yard touchdown run with 1:39 left to hold off the Bears’ game upset.

Sanders rushed for a career-high 167 yards and a touchdown and had 242 all-purpose yards to help make up for a critical fumble on the Missouri State 1 in the first half.

Arkansas did all the things that heavily favored teams typically do when underdogs give them a scare. The Razorbacks committed three turnovers, did not force one of their own, dropped a few passes and had key penalties, particularly with pass interference calls on defense and holding calls on special teams.

Jefferson completed 19 of 31 passes for 385 yards and 2 scores. Matt Landers had his first 100-yard game with seven catches on eight targets for 123 yards.

Missouri State surprised the home crowd with two takeaways in the first quarter and cashed in both turnovers for points to grab a 10-0 lead.

The home crowd was stunned further when the Bears expanded their lead to 17-0 early in the second quarter.

Arkansas, which had a 5-1 edge in turnovers heading into the game, got sloppy with ball security in the early going.

On the Hogs’ second possession, Jefferson connected with Landers for a 26-yard gain to the Missouri State 44. Jefferson gained 8 yards up the middle on the next play, but linebacker Von Young wrenched the ball free and scrambled on top of it to halt the series.

Shelley, a FCS preseason All-American, took advantage with pass plays of 18, 17 and 19 yards, the last to former Razorback Jordan Jones to reach the Arkansas 15. On third and goal with the crowd roaring, Jacardia Wright was stalled at right guard but bounced wide and ran in for a 1-yard touchdown to give the Bears the lead.

Moments later, Arkansas’ Ketron Jackson got free down the right sideline beyond Caleb Blake and was hauled down inside the 1 while stretching for the goal plane. On the next snap, Sanders was headed up the middle when linebacker Ferrin Manuleleau put his helmet right on the ball, popping it free and into the end zone. Defensive lineman Ikenna Ahumibe pounced on the loose ball for a touchback to thwart the 74-yard drive.

Missouri State went up 10-0 on Pizano’s 28-yard field goal, then Shelley broke out of the pocket, broke a tackle and charged in for a 24-yard score.

The Hogs got back in contention on Sanders’ 3-yard touchdown to cap a 75-yard march and a two-play touchdown drive late in the first half, capped by Jadon Haselwood’s 38-yard catch and run score to pull within 17-14.