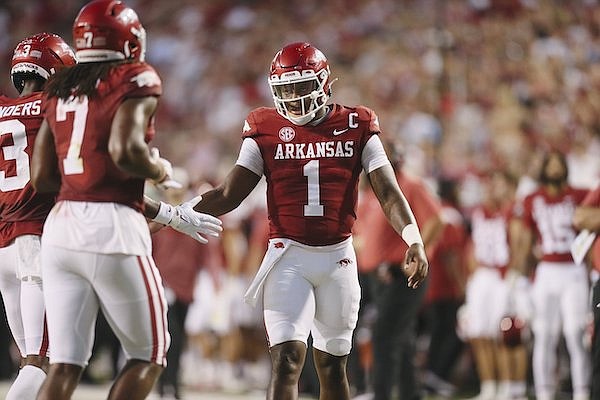 Arkansas quarterback KJ Jefferson (1) is shown during a game against Missouri State on Saturday, Sept. 17, 2022, in Fayetteville.

FAYETTEVILLE — University of Arkansas quarterback KJ Jefferson’s first interception of the season came on his 65th pass attempt, and it wasn’t his fault.

Jefferson’s pass over the middle on the Razorbacks’ first series of the third quarter of Saturday night’s game against Missouri State hit normally sure-handed tight end Trey Knox in the hands, but he couldn’t finish the catch.

The ball bounced off Knox’s hands and was intercepted by Missouri State linebacker Tahj Chambers to give the Bears possession at the Arkansas 49.

This season marks the 30th anniversary Arkansas of losing to The Citadel 10-3 in the 1992 season opener.

At the time, The Citadel — a military college in Charleston, S.C., in the Southern Conference — was an NCAA I-AA team.

Now teams that were I-AA play on the FCS level.

Losing to The Citadel was Arkansas’ first game as a member of the SEC after moving from the Southwest Conference.

Jack Crowe was fired as the Razorbacks’ coach the next day by Arkansas Athletic Director Frank Broyles and defensive coordinator Joe Kines was promoted to interim coach.

Going into Saturday night’s game, the Razorbacks had won 18 consecutive games against I-AA/FCS teams. They started the streak with a 38-0 victory over Missouri State in the 2000 season opener.

Arkansas sophomore running back Raheim Sanders had his third game to start the season of rushing for more than 100 yards after gaining 167 on Saturday night.

Sanders rushed for 117 yards in the opener against Cincinnati and a career-high 156 against South Carolina.

Missouri State received a $450,000 guarantee for playing at Arkansas on Saturday night.

The guarantee goes up to $500,000 when the Bears are scheduled to play the Razorbacks in the 2025 opener in Fayetteville.

Arkansas sophomore receiver Ketron Jackson had the longest play of his career when he hauled in a pass from KJ Jefferson for a 64-yard gain in the first quarter.

Jackson stretched the ball out as he was going to the turf and nearly scored a touchdown, but officials ruled him down at the Missouri State 1.

Unfortunately for the Razorbacks, the big play didn’t result in any points when Raheim Sanders fumbled on the next play and defensive tackle Ahumibe Ikeena recovered the ball for the Bears.

The previous long play for Jackson was a 39-yard catch last season against Missouri.

Many fans cheered when the Razorbacks went for the first down on fourth-and-9 from the Missouri State 39 late in the second quarter.

But the cheers turned to boos when instead of a pass, KJ Jefferson handed the ball to freshman running back Rashod Dubinion, who was stopped after a 5-yard gain and Arkansas turned the ball over on downs.

Arkansas Coach Sam Pittman and Missouri State Coach Bobby Petrino spent several minutes in a talk at the Missouri State 45-yard line about 40 minutes before kickoff. The meeting came after Pittman and Petrino, the former Arkansas coach, shook hands with all the game officials.

The Arkansas student section had a relatively loud reaction to Petrino when he entered from the southeast tunnel at Reynolds Razorback Stadium. The stadium sound system was blaring out “Juke Box Hero,” its weekly tribute to Pittman, whose juke box has become an Arkansas sensation his his three years at the helm, when Petrino entered.

Within a few minutes of Petrino’s entrance, Arkansas defensive coordinator Barry Odom spent a few minutes chatting with him, followed by tight ends coach Dowell Loggains, the former Razorback player, who spent the most time talking with him. As Loggains and Petrino chopped it up, former Arkansas tight end D.J. Williams, who played three seasons under Petrino from 2008-11, joined the conversation for a few minutes.

Bears Coach Bobby Petrino coached in his third Arkansas-Missouri State game. He was the Razorbacks’ coach when they beat the Bears 48-10 in 2009 in Little Rock and 51-7 in 2011 in Fayetteville.

Malik Chavis, a redshirt junior from Rison, started at cornerback for Arkansas in place of Hudson Clark.

It was Chavis’ first start of the season and third of his career. He made two starts last season.

Clark opened the game on special teams, playing on kickoff coverage, and was at cornerback for Arkansas’ second defensive series.

Landon Jackson, a sophomore transfer from LSU, started at defensive end for the Razorbacks. It was his first career collegiate start.

Arkansas started a four-man defensive from with Zach Williams as the other end and Isaiah Nichols and Eric Gregory at the tackle spots.

Nine inductees into Arkansas Sports Hall of Honor class were introduced on the field during the break between the first and second quarters.

The A Club and Razorback letter winners vote on the inductees.

Arkansas played its first home game as a top 10-ranked team since the first two weeks of the 2012 season.

The Razorbacks, ranked No. 10 in this week’s Associated Press poll, also were ranked No. 10 when they opened the 2012 season by beating Jacksonville (Ala.) State 49-24 in Fayetteville in John L. Smith’s debut as the UA’s interim coach.

Arkansas rose to No. 8 in the AP poll, then lost to Louisiana-Monroe 34-31 in Little Rock and fell out of the national rankings until 2015.

Missouri State played its 40th game against an FBS team and at least such opponent for the 33rd consecutive year.

The Bears were 1-38 all-time in games against FBS opponents with the victory at UNLV 31-24 in the 1990 season opener when Jesse Branch — a former Arkansas player and assistant coach — was their coach. Back then, Missouri State was known as Southwest Missouri State.

Missouri State Coach Bobby Petrino coached his 200th game on Saturday night on the college level. That includes a 34-17 record as Arkansas’ coach from 2008-11.

Petrino had 134-65 record at Louisville, Arkansas, Western Kentucky and Missouri State going into Saturday’s night game. He was 3-10 in 13 games as an NFL coach with the Atlanta Falcons in 2007 before resigning to take the Arkansas job.

Receiver Jordan Jones, a Smackover native, transferred to Missouri State from Cincinnati after beginning his college career at Arkansas.

Missouri State played on a grass field for the first time since its 2020 season opener at Oklahoma.

When Bears Coach Bobby Petrino was at Arkansas, he had the grass field at Razorback Stadium replaced with artificial turf in 2009.

A grass field then was installed to replace the artificial turf field after the 2018 season.

Arkansas improved to 8-7 when playing a team whose coach previously was the Razorbacks’ coach.

In addition to being 1-0 against Bobby Petrino and Missouri State, the Razorbacks went 4-2 against Lou Holtz and South Carolina, 2-2 against Houston Nutt and Ole Miss, 1-0 against Jack Crowe and Jacksonville (Ala.) State and 0-3 against Francis Schmidt and TCU.

Holtz’s Razorbacks won their first seven games against nonconference opponents — including a 31-6 victory over Oklahoma in the 1978 Orange Bowl — before playing UCLA to a 10-10 in the Fiesta Bowl to cap the 1978 season.

Arkansas was 10-0-1 against nonconference teams under Holtz before losing to Alabama 24-9 in the 1980 Sugar Bowl.