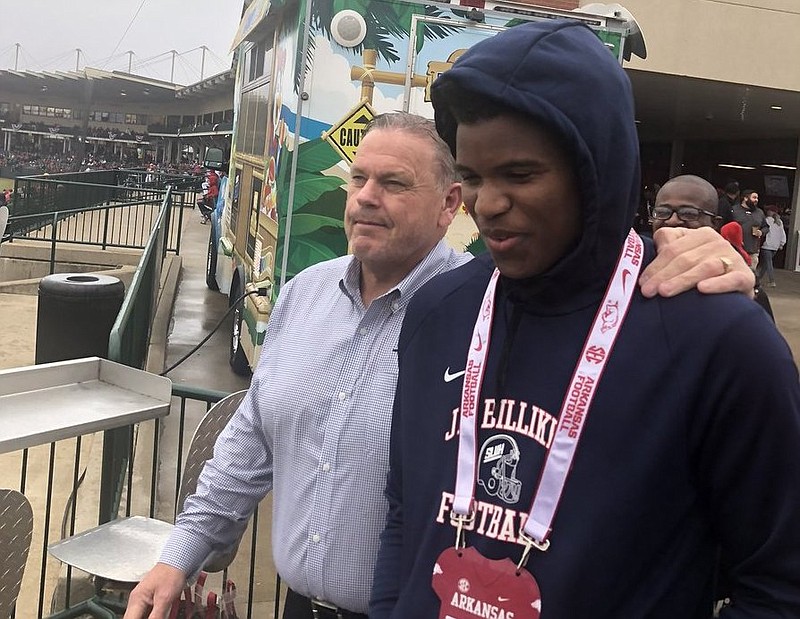 The University of Arkansas home football game against Alabama on Oct. 1 is expected to see numerous top recruits visiting, including a major 5-star target.

Junior receiver Ryan Wingo visited the Hogs for last year’s 40-21 victory over Texas and again on March 5, Now he is expected to watch Arkansas take on the Crimson Tide.

The younger brother of Ronnie Wingo Jr., who played running back for the Razorbacks from 2009-2012, Ryan might be accompanied by his brother.

“I just want to see how the fans get up for the game,” the younger Wingo said. “It’s a big game, an SEC game. I think my brother is coming up with me.”

Rivals rates Wingo a 5-star recruit, the No. 2 receiver and the No. 7 overall prospect in the nation for the 2024 class.

The older Wingo is widely known for the 43-yard wheel route reception for a touchdown against Alabama in 2010 to put the Hogs up 7-0 early in the first quarter.

“He had a big play against Alabama, so you really can’t say too much when that conversation comes up,” Wingo said.

In a 2016 story on onecounrty.com, Reynolds Razorback Stadium was rated as the sixth loudest stadium in college football after hitting 117 decibels in a 34-30 victory over Ole Miss that same year.

When safety Santos Ramirez hit Ole Miss quarterback Chad Kelly and forced a a fumble that went out of bounds short of what was needed on fourth and 16 in the final minutes, the crowd erupted.

While that play might be the loudest recorded at the stadium, many Razorback fans say the stadium was never louder than when Ronnie Wingo Jr. scored on the wheel route.

The younger Wingo said he has seen the video and comments on Twitter.

“A lot of people say that,” Wingo said of his brother’s touchdown. “I see that in the comments all the time. His brother had the loudest [play].”

The love of football runs deep in the family. Another brother Raymond played at Missouri and his father signed with Michigan State out of high school.

Since Sept. 1 was the first day college coaches could directly contact junior prospects and since that day, Wingo has been in contact with Arkansas Coach Sam Pittman and receivers coach Kenny Guiton more often.

“It’s been good. I’ve been talking to Coach Pittman a lot more, talking to Coach Guiton a lot,” Wingo said. “Building that relationship and trying to get up there, so we’re aiming for the Bama game.”

Wingo said he communicates with Pittman about three to four times a week and Guiton about two to three times per week.

“He’s just telling me he needs me to come,” Wingo said of Pittman. “He needs me at Arkansas and he’s not going to stop until he gets me.”

Wingo had 32 catches for 638 yards, 10 touchdowns, 4 rushing touchdowns and passing touchdown as a sophomore. He had 1,072 total yards and averaged 46.5 yards per kick return.

In four games this season, Wingo has 18 receptions for 426 yards and is averaging 31 yards per punt return with 9 total touchdowns. He also has punted for a 46-yard average.

His last trip to Fayetteville in March featured a lot of time with Pittman. Wingo said he saw how the Razorback fans’ deep affection for Pittman while attending the Hogs’ baseball game against Southeastern Louisiana.

Pittman entertained Wingo and had him laughing during the visit.

Wingo visited Pittsburgh last weekend and Texas A&M on Saturday. He’s expected to visit Tennessee on Sept. 24 before making his way to Fayetteville for the Alabama game.