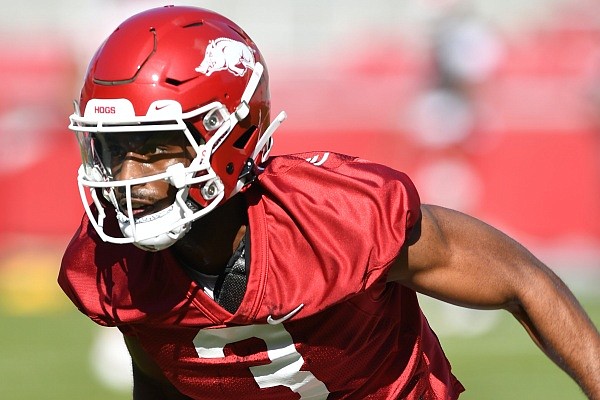 FAYETTEVILLE — Arkansas’ football team worked out inside Walker Pavilion on Monday to begin prep for Saturday's game against Texas A&M in Arlington, Texas.

Here are a few notes from the open viewing periods:

• Defensive back Myles Slusher (undisclosed) was present at practice and in a no-contact jersey. Slusher has missed Arkansas' last two games.

Freshman wide receiver Isaiah Sategna, who was not in uniform against Missouri State, was not present Monday.

• LSU transfer cornerback Dwight McGlothern (hamstring) looked to be full-go and was taking part in drills. Slusher rolled with the top group of defensive backs in individual drills.

• The offense was working against the scout-team defense as reporters were walking out, and crowd noise was being pumped in. The Razorbacks will face a good-sized opposing crowd for the first time on Saturday in AT&T Stadium.

• Wide receivers Jadon Haselwood and Warren Thompson made two really nice catches on air. Thompson had to jump and extend his arms to bring in a ball, and Haselwood brought in a pass around his knees and did not break stride.

Sam Pittman said at his Monday press conference that Haselwood has been as consistent as any receiver through three games. He also praised the Oklahoma transfer’s leadership and toughness.