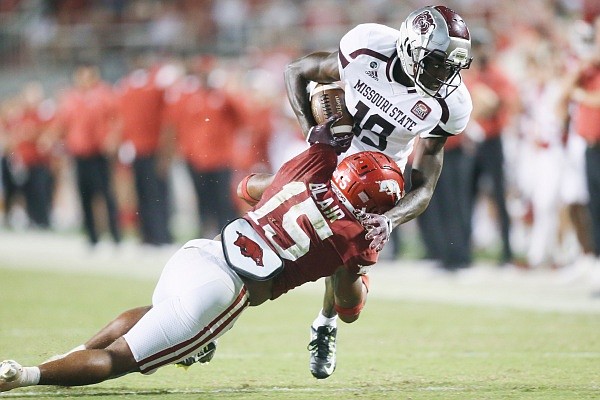 FAYETTEVILLE — The Arkansas Razorbacks said they respected and did not overlook Missouri State heading into Saturday’s game against the Bears.

The University of Arkansas was an overwhelming favorite to beat the Bears, but the 10th-ranked Razorbacks found themselves trailing 17-0 early in the second quarter. In that span, the Razorbacks lost fumbles by KJ Jefferson and Raheim Sanders and Missouri State turned those takeaways into 10 points.

“I don’t feel like we overlooked them at all,” senior safety Simeon Blair said. “We knew that they were going to be a good team. We looked at a lot on their film against Oklahoma State the previous year where they had a good game and almost beat them.”

The Bears lost 23-16 to well-regarded Oklahoma State last year and had the ball late in the game with a chance to score and potentially tie or take the lead before the series was thwarted.

“I feel like on the sideline that we grew today,” Blair said. “We never had any panic. We felt that we knew we had each other’s backs.”

“Just a little slow out of the gate, obviously,” Sanders said. “We were just trying to make plays and get back in the game as much as we could. It was a dogfight out there.”

“We wanted to be tough and try to match their speed and their physicalness,” Petrino said. “And for most of the night we did a pretty good job of that. But nobody blinked.

“The thing that you always worry about when there is a little bit of a mismatch in personal is you would get a little wide-eyed and don’t really believe that we can play with them and don’t believe we can win. Because then things happen that don’t normally happen. They didn’t do that. They believed that we would go find a way to win the game and played extremely hard.”

Arkansas Coach Sam Pittman credited Petrino with having his team better ready to play than the Razorbacks.

Arkansas is set to begin a stretch of five games that increases the difficulty level: Saturday’s game in Arlington, Texas, against No. 23 Texas A&M, a home game against current No. 2 Alabama, then road games at Mississippi State, Brigham Young and Auburn.

“We’re not going to have problems getting up for the next few,” Pittman said. “The name on the side of the hat is pretty significant. But, I don’t in any way want to not give Missouri State everything they deserve.

“Their team wasn’t better than us today because we beat them, but coach was better than me today, and I have to get that fixed.”

The Razorbacks remained at No. 10 in the Associated Press top 25 rankings on Sunday and were also slotted No. 10 in the USA Today coaches poll and the Football Writers Association of America Super 16 rankings.

This marked the first time Arkansas has been ranked in the top 10 in back-to-back AP polls since the preseason and opening week of 2012, when it debuted at No. 10 and rose to No. 8 after a win over Jacksonville State.

Arkansas has not been in the top 10 for three consecutive weeks since a stint from week 6 in 2011 through the end of the season, a span of 11 straight polls. The Razorbacks rose as high as No. 3 that season before finishing No. 5 after a 27-16 Cotton Bowl win over Kansas State.

The Razorbacks rose a spot to No. 10 in the USA Today Coaches poll, as teams around them like No. 9 Michigan State, No. 13 Miami and No. 14 BYU all lost.

Arkansas fell a spot to No. 10 in the Super 16 rankings after reaching No. 9 last week.

The Arkansas Democrat-Gazette uses the AP rankings as its poll of record until the release of the College Football Playoff rankings in late October.

Sam Pittman sounded optimistic at getting both defensive back Myles Slusher and defensive end Jashaud Stewart back early in the week.

Slusher has been out since the first half of the win over Cincinnati, when his hard tackle on 255-pound tight end Leonard Taylor dropped him to the grass. He left the field groggy with an upper body injury.

Stewart did not dress out Saturday for an undisclosed issue.

Pittman has intentionally been vague regarding injuries during training camp and the season since his arrival.

“Jashaud, I think he’ll be fine on, hopefully, Monday,” Pittman said. “And I think, I said it last week on Slush too, but I’m hoping he’ll be ready to go by Monday. I sure think he will but I don’t know that.”

The Razorbacks were also without cornerback LaDarrius Bishop and safety Jalen Catalon, who is out for the year.

Pittman said tailback Dominique Johnson, who has not played through three weeks after recovering from knee surgery, should be “fine and ready to go” this week.

Rocket Sanders had career highs of 167 rushing yards and 75 receiving yards. He broke his personal single-game rushing record for the second week in a row and moved to No. 3 nationally with 146.7 rushing yards per game.

Sanders got upset with himself after losing a fumble inside the Missouri State 1-yard line in the first half, adding to the Bears’ upset prospects.

“I feel I didn’t make up for it,” Sanders said. “Yeah, I did great tonight, but I feel like that’s something I need to work on. We work on ball security a lot, so I feel like that was a MA [missed assignment] for me.”

He caught 5 passes for a career-high 150 yards against Eastern Michigan last Nov. 2, and had 4 receptions for 137 yards against Middle Tennessee State on Dec. 17.

“He struggled with that,” Pittman said. “It was bothering him. I hope he doesn’t mind me saying that. I told him, I said, ‘You’re going to drop another one eventually, you will. But it ain’t because you don’t want to and it’s not because you can’t catch it. It’s just you dropped it, so get over it and move on.’”

The Razorbacks racked up eight sacks to ascend to No. 1 in the FBS with 17 sacks, an average of 5.67 per game.

Zach Williams had 2 against the Bears to bring his season total to 2.5, while Jayden Johnson and Landon Jackson have 1.5 apiece, and Bumper Pool and Simeon Blair have 1 each.

Arkansas gave up 357 passing yards to Missouri State quarterback Jason Shelley, the second consecutive game an opposing player has passed for 350-plus yards on the Hogs, as Spencer Rattler had 376 yards the week before.

The flip side of that statistic for the Razorbacks: They lead the SEC and are No. 6 nationally in run defense, allowing 68.3 yards per game.

Missouri State quarterback Jason Shelley, a two-time transfer who had been at Utah and Utah State, showed why he’s a preseason FCS All-American.

The 5-11, 200-pounder from Frisco, Texas, completed 24 of 43 passes for 357 yards and a touchdown, maneuvering in and out of the pocket to operate the Bears’ offense. Shelley did not throw an interception.

His sack numbers — eight for 48 yards in losses — hide a solid running performance. Take away the sacks and Shelley had nine other carries for 62 yards, including a tackle-breaking 24-yard touchdown run that put the Bears ahead 17-0 in the second quarter.

“We’re fighting our butt off, but we had to pressure him,” Arkansas Coach Sam Pittman said. “The guy’s hard to tackle. He’s a good player.

“Going into that game, that was exactly the game plan. We were going to put pressure on him because we knew how good their receivers were. We just couldn’t contain him. He’d get outside the pocket and make plays with his feet.”

The Razorbacks will be on the site of the SEC Nation traveling show for the second time in the first month of the season.

The SEC Network’s Saturday morning showcase made its 2022 season debut in Fayetteville for the top 25 showdown against Cincinnati.

The crew of host Laura Rutledge and analysts Roman Harper, Jordan Rodgers, Tim Tebow and Paul Finebaum will be at a set location around Arlington that has not yet been determined.

The sophomore from Rockledge, Fla., rushed for 167 yards on 22 carries and had a 3-yard TD run. Sanders also caught 2 passes for 75 yards, highlighted by a 73-yard shovel pass score. He wound up with a career-best 242 yards from scrimmage.

The junior from Denton, Texas, posted a team-high 12 tackles, 5 of them solo, plus 2.5 sacks for 13 yards in losses. Sanders had a half sack with Jordan Domineck in the 2nd quarter and a pair of solo sacks covering 3 and 6 yards in the fourth quarter.