A win is a win, and Arkansas found a way 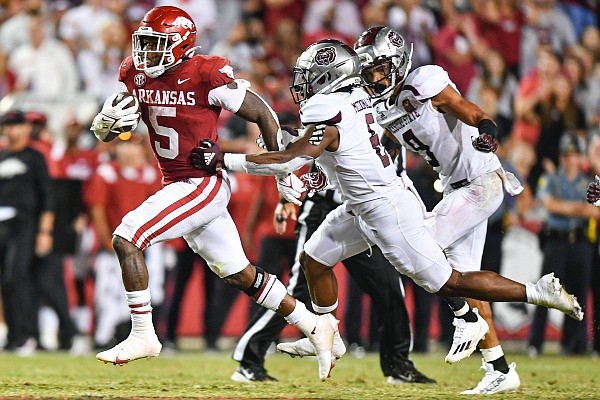 By this time next week, only a few Arkansas Razorback fans will care what the score was. A win is a win.

When the polls were announced Sunday afternoon, the Razorbacks were still No. 10 in The Associated Press Top 25, moved up a spot to No. 10 in the coaches poll and were No. 10 in the FWAA’s Super 16.

Undefeated and in the top 10 is all that should matter, especially when looking back at the two 2-10 seasons under Chad Morris, a nice guy who didn’t have the strong leadership personality needed to succeed at the top level.

Granted, down 17-0 to an FCS team, even one coached by the brilliant Bobby Petrino, brings back bad memories.

At that point, no one would have guessed the Razorbacks would outscore the visitors 38-10 in the final 38 minutes.

Yep, a point per minute, which is what most expected for an entire game from the Razorbacks’ offense.

No one thought it would be a shutout. Petrino is too smart for that, and he had his team well-prepared and ready.

No one should have thought the entire game was going to go like the Razorbacks’ first four possessions — when they lost two fumbles, which led to 10 of the Bears’ points, and two three-and-outs.

Arkansas cracked the goose egg on its fifth possession, driving 75 yards in eight plays, keyed by two big plays which would become the theme against the Bears.

Matt Landers had a 20-yard reception on first down, and two plays later, Raheim Sanders had a 27-yard run. Landers finished the night with seven catches for 123 yards.

Jadon Haselwood had a 30-yard catch on first down, but that was the possession that ended in the much-discussed fourth-and-9 that the Hogs went for with a run that gained 5 yards.

That, too, will be a short-term memory.

On Arkansas’ next possession, Landers had a 47-yard catch-and-run on first down, and on the next down, Haselwood had a 38-yard catch for a touchdown.

The longest play of the Hogs’ next scoring drive was an 18-yard catch by Landers that led to a field goal and 17-17 tie.

The Bears scored 10 unanswered points. But with 11:38 to play, Sanders took a shovel pass from KJ Jefferson and went 73 yards for the score to make it 27-24.

Arkansas’ defense forced a punt that Bryce Stephens returned 82 yards to put the Hogs in front for the first time in the game.

The Bears drove to the Razorbacks’ 39, but Zach Williams got a sack for a 9-yard loss on third down. It was his second of the night and the Hogs totaled nine. For the season, they have 17 to lead the nation.

The Hogs then put the game away with a nine-play, 80-yard drive that was kept alive on third and 12 with a 21-yard pass to Trey Knox.

Jefferson sealed the deal on a 1-yard run with 1:39 to play, and victory had been snatched from the jaws of defeat by the Razorbacks’ ability to make big plays.

Arkansas would finish with 597 yards of offense and an unforgettable fourth quarter in which they outscored the Bears 21-0.

In that period, they had 152 yards of offense with 56 on the ground and 96 in the air as Jefferson completed 3 of 4 passes.

In the first two games, the Razorbacks didn’t need a lot of big plays.

They had never trailed until Saturday night and they have outscored their first three opponents 51-21 in the fourth quarter.

For a while, they had their hands full of a very talented, well-coached FCS team. But in the end, with the game on the line, everyone stepped up big.