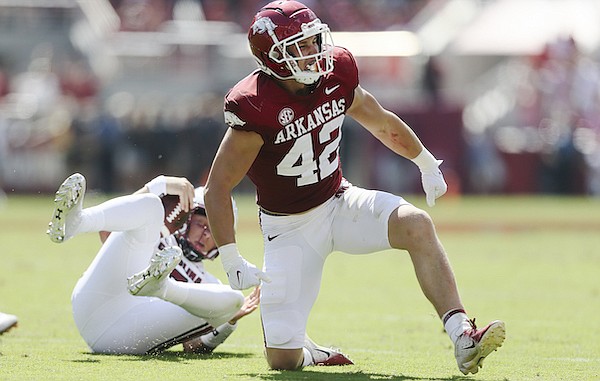 Arkansas linebacker Drew Sanders reacts after making a tackle during a game against South Carolina on Saturday, Sept. 10, 2022, in Fayetteville.

FAYETTEVILLE — University of Arkansas linebacker Drew Sanders is a big part of the media buzz for Saturday’s national CBS broadcast of No. 2 Alabama at No. 20 Arkansas.

The former five-star prospect from Denton, Texas, will be facing his former team for the first time after a huge start with the Razorbacks. The 6-5, 233-pound junior is tied for the national lead with 5.5 sacks.

Arkansas athletic department officials elected to keep Sanders from interviews this week to keep the focus on the field.

“He’s such a mature guy, and I’m sure he’ll have feelings, but we try to keep it as light as we can on that situation,” Arkansas Coach Sam Pittman said. “I think he’ll be fine. He’ll obviously want to play well, and I’m sure the guys over there will want to play well against him. I think they would regardless of whether he had transferred or not to be honest with you.”

Speaking of keeping it light, Pittman said he dropped into linebackers coach Michael Scherer’s office with Sanders and Bumper Pool in it to tell “funny stories” about him “being at Blaine County” and competing against a former team.

Alabama linebacker Will Anderson had been roommates with Sanders early in their careers.

“I’m very happy for Drew,” Anderson said. “He is getting what he deserves. He’s been playing extremely well. I’m happy for him. Proud of him.”

“He was always really cool off the field,” Young said. “I could have a conversation with him and talk about whatever. Very fierce competitor. He always wanted to win.

“He’s always going and giving extra practice always working hard. I think just that fierce competitive nature is what makes him so as great of a player as he is.”

After Arkansas quarterback KJ Jefferson racked up 348 yards and 3 touchdowns in a 42-35 loss at Alabama last year, the Crimson Tide are well aware of the threat he poses.

Alabama Coach Nick Saban praised Jefferson’s scrambling ability, and added, “You can’t minimize the effectiveness of this guy as a passer. He is really, really good. He’s got strong arm. Throws the deep ball well, and they make a lot of explosive plays because they run the ball extremely well.”

Facing a gifted passer and scrambler in practice in Heisman Trophy winner Bryce Young should be helpful for Alabama defenders.

“To have those types of quarterbacks on our team, coach is going to do a good job to show us what we’re going to see in the game. As an edge rusher getting from point A to B, sometimes you can get pushed by the quarterback. I think that is going to be the biggest thing this week that coach is probably going to harp on a lot. We can’t be pushed behind the quarterback.”

Both Arkansas and Alabama will be looking to create takeaways after going into lulls in that department.

Arkansas opened the year with a 5-1 advantage in turnover margin after two games. However, the Hogs have given all that back with a 4-0 deficit in the last two games, including a fumble that led to Texas A&M’s game-changing 97-yard touchdown return last week.

“We talk about winning the turnover battle, and obviously you have to get some to win it,” Arkansas Coach Sam Pittman said. “Certainly, making an emphasis on it … and hopefully this game is the one.”

Alabama has just three takeaways on the year, including Will Anderson’s 25-yard interception return for a touchdown, and trails 5-3 in turnover margin.

Arkansas tight end Trey Knox could find himself matched up against Alabama linebacker Will Anderson who finished fifth in the Heisman Trophy balloting behind his teammate, quarterback Bryce Young, and who has 4.5 sacks this season.

Knox and Anderson had a couple of encounters last year, when the Razorbacks played from behind all game before falling 42-35.

“I blocked him maybe a couple times last year,” Knox said. “He’s a great player. He’s a big guy and he plays physical. I just have to match that intensity and play to the best of my ability and with great technique and I’ll be all right.”

The motor on Alabama outside linebacker Will Anderson Jr. runs very high. This week, he discussed one way he gets fueled up to be what Coach Nick Saban has termed a “hateful” player in road games.

Asked if he considered himself a “hateful” player, Anderson replied, “Yeah, I do. I tell people all the time, the audacity for the other team to even step on the field is disrespectful to me.

“I tell people that all the time. People ask me what motivates me. I say, the audacity for the fans to show up and for the team to come step on the field and play with us. That’s kind of my own little thing in my head that I go through.”

In discussing the offensive series against Texas A&M that included three consecutive targets or touches for Malik Hornsby, Coach Sam Pittman revealed an interesting fact. The play for Hornsby, on which he was tackled for no gain, was designed to be a flea flicker.

“On one of Hornsby’s plays, we didn’t pitch it back to KJ,” Pittman said. “If we do, Knox is wide-open. That was the play, and for whatever reason there was a little bit of penetration. He decided to run it instead of pitch it back. If he pitched it back, I think the guy is wide-open, we score a touchdown.”

Pittman defended the play calls on Saturday, which came after a series of Dominique Johnson runs had helped Arkansas reach the Texas A&M 38-yard line while leading 14-0.

“We go into a game basically thinking that you’re going to be about 50-50, run and pass, and you have your packages with different guys,” Pittman said. “But then, during a game you go with what’s working for you.

Freshman tight end Ty Washington has been playing on the kickoff return team, but he’s probably going to be pulled from it the rest of the year to preserve his redshirt.

Asked if there were specific freshmen the coaching staff wanted to preserve the redshirt on, Coach Sam Pittman said Washington would be one who fit that description. Players can retain a redshirt if they play in four or fewer games during a 12-game season.

“That would be the one guy that I told our staff, ‘Hey listen, let’s take him off special teams and if we need him to play tight end to win a game, then we’ll go ahead and do that,’” Pittman said. “If not, then his four games would be played. That would be the only guy right now that’s kind of not obvious to be honest with you.”

Texas A&M defensive back Antonio Johnson was named the Lott IMPACT player of the week for his work against Arkansas last week. The sophomore from East St. Louis, Ill., notched a game-high 13 tackles against the Razorbacks.