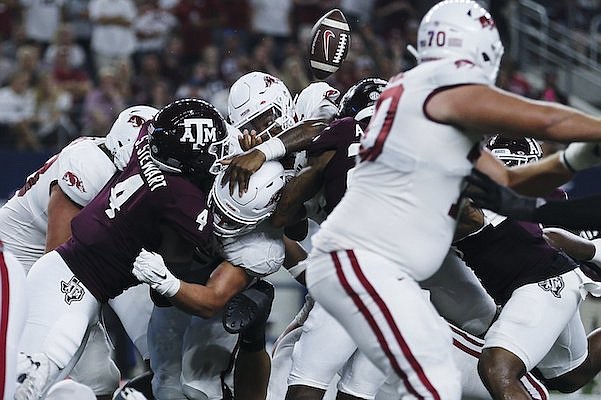 Arkansas quarterback KJ Jefferson fumbles during a game against Texas A&M on Saturday, Sept. 24, 2022, in Arlington, Texas. The Aggies returned the fumble 97 yards for a touchdown.

FAYETTEVILLE — University of Arkansas Coach Sam Pittman conducted an exercise in team building in the aftermath of Saturday’s gut-wrenching 23-21 loss to Texas A&M.

During his appearance on the SEC coaches teleconference this week, a reporter asked Pittman about the “KJ Jefferson play that went crazy” and what he’s said to the quarterback this week to stay focused for Saturday’s showdown against No. 2 Alabama.

“You talking about the … one play in the game …. the fumble?” Pittman asked.

When the reporter confirmed that yes, he was talking about the leap from the 3 that resulted in a fumble and Texas A&M’s 97-yard return for a touchdown, Pittman added some context then related a story.

“Yeah, he had a lot of really good plays as well,” he said. “I think any time you have elite players on your team, there’s not a whole lot you have to say to them, to be honest. You saw him during the game after that play trying to play his heart out, trying to, I don’t know if make up for the play is something, but he’s trying to win the game and had us in position to do that.”

Jefferson scored a rushing touchdown to draw Arkansas within 23-21, then drove the Razorbacks to the Aggies’ 15 in the closing moments before a muffed snap by Ricky Stromberg and Cam Little’s missed 42-yard field goal ended their comeback hopes.

Pittman made sure not to pin extra emphasis on those mistakes.

“I’ll be honest with you, I stood up guys who made MAs [missed assignments], I stood up coaches, including myself, that could have done a better job,” Pittman said of his action during a team meeting.

“We all made mistakes. Sometimes they’re just bigger than others because of the situation and the timing of the game that they happen. It was a mistake and we had everybody on our team that made a mistake and coaches as well, so we all had to move on from it. He’s done a really nice job moving on this week.”

Coach Sam Pittman said he is hoping Arkansas fans show up in big numbers and big voices during the team’s “Red Out” against Alabama on Saturday.

“Knowing the state of Arkansas and the passion for the Razorbacks, I would think this would be the best crowd since I’ve been here,” Pittman said. “The rowdiest, the best. I guess it’s a Red Out. But I’m hearing people are already lining up for parking spaces and things as early as today. … I think everybody’s excited, and hopefully we can put on a show for the fans. We’ll just have to wait and see.”

Later, speaking on his radio show, Pittman added, “I think our crowd’s going to make a difference in this game. I believe that. I think it’ll be one of the largest crowds we’ve ever had and it’ll be maybe the loudest crowd, or as loud as we’ve had. I think they’ll make a big difference in the game. We need them to.”

Alabama jumped out to a 10-0 lead over Arkansas in the second quarter last season, forcing the Razorbacks into a long game of catch-up, which they were unable to do.

“I don’t know how many times Alabama has played from behind,” he said on “Sam Pittman Live” on Wednesday night. “It certainly would be nice to get out ahead and see what happens.”

Alabama quarterback Bryce Young will be the sixth reigning Heisman Trophy winner the Razorbacks have faced.

The Razorbacks are 0-5 against teams with players who had already won the Heisman, with their most recent matchup a 45-33 loss to Texas A&M and quarterback Johnny Manziel at Fayetteville in 2013.

Arkansas had season lows of three penalties for 30 yards against Texas A&M last week, bucking a trend that had been bothersome. In their first three games, the Razorbacks had 23 penalties for 243 yards, an average of 81 yards per game.

Alabama has won the past 15 games in the series to take a 24-8 lead against Arkansas.

The Razorbacks have won seven games on the field and they were awarded a victory for the 1993 game as the NCAA imposed a forfeit on the Crimson Tide for using an ineligible player in that game, a 43-3 decision in Tuscaloosa, Ala. Alabama has also been forced to vacate two other wins due to NCAA infractions.

Arkansas Coach Houston Nutt had a 5-5 record in the series between 1998-2007, the most successful Hog run in the rivalry.

The Crimson Tide has won the past three games in Fayetteville by an average of 34 points per game with a cumulative score of 166-64 and an average of 55-21.

Alabama has a 4-1 record in true road games with Bryce Young at quarterback, but the margins of victory have been tight.

Outside of a 49-9 rout of Mississippi State last Oct. 16 in Starkville, Miss., the Crimson Tide have been in a fight in road games the past two seasons, with none of the games decided by more than three points.

This season, Young engineered a late field goal drive to lead Alabama past Texas 20-19 at Austin, Texas, on Sept. 10. Will Reichard’s 33-yard field goal with 10 seconds remaining was the game-winner.

Forecasters are projecting a mild day in Northwest Arkansas on Saturday. The projected high temperature for the game is 79 degrees following an overnight low of 43 degrees.

The forecast is calling for a mostly sunny day with humidity around 46%, light breezes and a scant 3% chance of rain.

The Crimson Tide went on to win the SEC championship and lost to eventual national champion Ohio State 42-35 in a College Football Playoff semifinal in New Orleans.

Saban’s last loss to Arkansas was in 2002 when the Razorbacks beat LSU 21-20 in Little Rock on Matt Jones’ 31-yard touchdown pass to DeCori Birmingham and David Carlton’s PAT with 9 seconds left.

Carlton’s kick ended up being 35 yards after Arkansas was penalized for excessive celebration.