No. 4 Tide come to Fayetteville, on a roll away from home 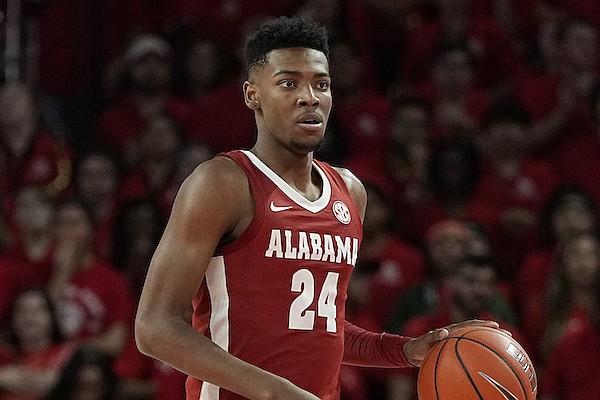 FAYETTEVILLE — Alabama already has beaten four nationally-ranked teams away from home this season, and the Crimson Tide will try for another marquee victory at the University of Arkansas.

“It’s a big road game for us. A big test,” Alabama Coach Nate Oats said. “If you’re going to try to win a conference championship, these are big games you’ve got to come ready to play in.”

Other ranked teams the Tide have beaten away from home include 81-70 over No. 12 Michigan State in Portland and 78-67 at No. 21 Mississippi State to open SEC play.

“They did an awesome job winning those games that they scheduled,” Arkansas Coach Eric Musselman said. “They’re a really confident team.”

“It starts with having a lottery pick in Miller,” Musselman said. “At his size, he’s playing the three spot.”

“You’ve got to locate him early because he’s got deep, deep range.”

Miller is one of four newcomers starting for the Tide along with 6-10 freshman Noah Clowney; 6-1 Mark Sears, a junior transfer from Ohio; and 6-3 freshman Jaden Bradley. Charles Bediako, a 6-10 sophomore, is in his second season as a starter.

Senior guard Jahvon Quinerly, a starter last season and the 2021 SEC Tournament’s Most Outstanding Player, is coming off the bench as is senior forward Noah Gurley, who had 14 starts last season.

“Just how well that they shoot the ball and their length this year is insane,” Arkansas senior forward Kamani Johnson said. “I mean, there’s guys on that team that were playing the bulk of the minutes last year that are coming off the bench this year.

“So it really shows how they improved talent-wise. But college basketball is kind of like the wild, wild west this year. You see teams winning on the road, losing on the road.

“There’s no for-sure team that’s just been super dominant. So saying that, anybody can be beaten on any given night and every night is a war, it’s a battle. So you just have to come prepared.”

The Razorbacks will play without freshman guard Nick Smith, a projected top five NBA Draft pick, for the fifth consecutive game and 11th overall as he continues treatment for a knee injury. Sophomore forward Trevon Brazile is out with a season-ending injury he suffered in the ninth game.

“They’ve got a little bit of an injury issue losing Brazile, and Nick Smith being out obviously hurts them,” Oats said. “But they’ve still got plenty of talent to compete with everybody.”

“We recruited both of them,” Oats said. “Both are really talented. Council is more of a scorer. Black can score, a little bit more of a distributor.

“Council plays off the ball, Black plays with the ball. They’re both big, skilled guards. We’re going to have to do a really good job on both of them.

“We’re going to have to keep Black out of the lane and keep Council’s scoring limited. Those two are going to make them go.”

Alabama comes into tonight’s game after pounding Kentucky 78-52 in Coleman Coliseum in Tuscaloosa on Saturday when Miller had 19 points and Sears had 16 points, 6 rebounds and 6 steals.

“They’re as good as any team that we’ve probably faced since I’ve been at Arkansas,” Musselman, who led the Razorbacks to victories over No. 1 Auburn and No. 1 Gonzaga last season, said on his radio show. “They just have so much firepower.”

“One, we’re a better team overall. That helps,” Oats said. “I think two is we’ve got a mature group that understands what type of character it takes to win some tough games.

“I think winning that game at Houston proved that we can play with anybody on the road. That was a tough environment.

“In order to win those road games like that, you’ve got to be tough. And I think we’re a little bit tougher.”

Alabama is holding opponents to 38.7% shooting, including 27.8% on three-pointers.

“We’re a much better defensive team,” Oats said. “You go on the road and sometimes you can get some offensive droughts, and your defense has to carry you. I think our defense is able to carry us a lot more this year.”

Alabama is playing at Arkansas for the first time since the No. 20 Razorbacks beat the No. 6 Tide 81-66 on Feb. 24, 2021. It was the second season for Musselman and Oats at Arkansas and Alabama.

“Honestly, I don’t really remember,” Musselman said when asked what stood out to him about the matchup two years ago. “I guess I black out after games, winning and losing.

“I couldn’t remember the score or anything to be honest with you.”

Oats had no trouble recalling Arkansas shot 35 more free throws than Alabama. The Tide hit 3 of 8 free throws compared to the Razorbacks hitting 27 of 43, including 16 of 19 by Moses Moody.

The Razorbacks are 2-2 against the Tide in coaching matchups between Musselman and Oats, including Alabama’s 68-67 victory at home last season.

“It’s always high energy when we play them,” Johnson said. “A lot of trash talking and just an aggressive game.”

Arkansas is 55-6 in Walton Arena under Musselman with a 17-game winning streak.