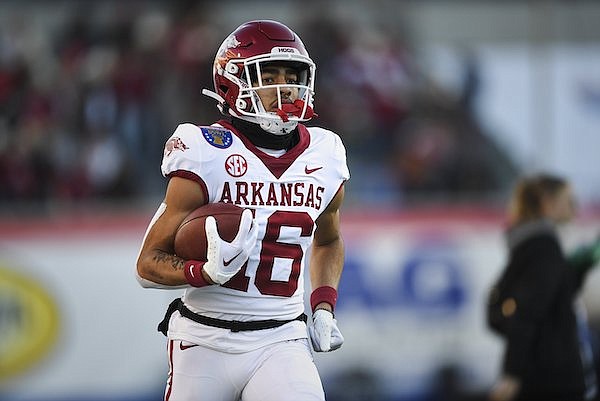 Arkansas receiver Isaiah Sategna is shown prior to the Liberty Bowl game against Kansas on Wednesday, Dec. 28, 2022, in Memphis, Tenn.

Sategna, who also is a receiver on the football team, will continue to do both sports he starred in at Fayetteville High School.

The plan this spring, Bucknam said, is for Sategna to go through football and track and field practices.

“We look forward to having him training with us starting next Monday,” Bucknam said. “He’ll be doing double duty with that and football.”

Sategna, who suffered an ankle injury in the preseason, played in four football games this season and retained his redshirt. He had two receptions for 12 yards.

Last year Sategna won the long jump at the Class 6A meet in a state record 24 feet, 8 inches and also won the 110-meter hurdles and the 330-meter hurdles and tied for first in the 100 meters to lead Fayetteville to the championship. He was rated the top football recruit in Arkansas and Gatorade named him the state’s best track and field athlete.

“He’s got no pressure as far as competing in track right now, which is really good,” Bucknam said. “He can work his way onto our team. He’s excited about it.

“We look forward to probably getting a little bit more of him once spring football is done. But this year right now, it’s just a matter of getting him in, getting him acclimated with the rest of our guys.

“He’ll be going maybe three days a week with football, a couple days with track. He’ll have a full schedule all week long. That’s not easy to do, but he’s willing to give it a shot and we’ll get him going.

“Because he’s got a great future in football and we want to make sure that continues to blossom and get better, and it’s big for him going through spring ball being a freshman.”

Bucknam said redshirting this track season is a good long-term plan for Sategna and the Razorbacks.

“For him to be able to redshirt and get an extra year with us for track will be really important,” Bucknam said. “He’ll be able to do a lot more damage his fifth year than he would his true freshman year for us.”