Razorback Report: Graham gives a lift off the bench 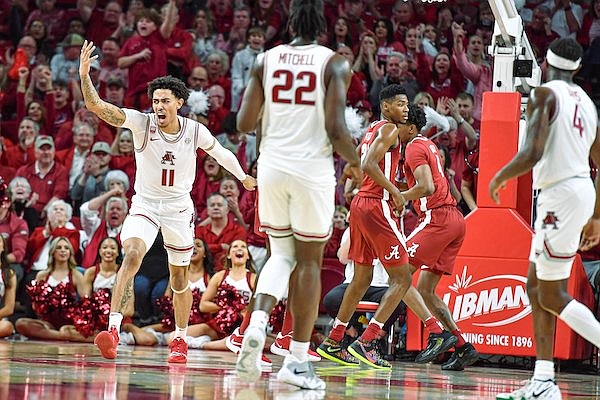 Arkansas forward Jalen Graham (11) celebrates a basket during a game against Alabama on Wednesday, Jan. 11, 2023, in Fayetteville.

FAYETTEVILLE — The No. 15 Arkansas Razorbacks switched up their starting lineup for the fifth time this season but got two of their biggest scoring sparks from off the bench in an 84-69 loss to No. 4 Alabama on Wednesday night in Walton Arena.

Jalen Graham scored 16 points on 8-of-10 shooting to tie Davonte Davis for team-high scoring honors. Leading scorer Ricky Council also came off the bench for the first time this season and contributed 15 points.

“Right now we’re still trying to figure out who we are,” University of Arkansas Coach Eric Musselman said. “We changed the starting lineup tonight. I thought it worked out great for us in the second half.

Graham showed a variety of low-post moves to get rolling, including a one-hand jumper from close range over 7-footer Charles Bediako, a dunk from Davis, and a 15-footer from the right elbow.

“It was a lift, and we needed that off the bench,” said forward Makhel Mitchell, who was in the starting lineup for Council for height matchups. “He did fantastic. That’s my brother, and we’re gonna keep pushing him to get more out of him.”

Musselman was impressed with one side of the ball from the 6-9 Graham.

“He played very well offensively,” he said. “He gave up the three in the right corner to [Noah] Clowney, which I thought changed the complexion of the game. I think that was when we were maybe a possession away.

“Offensively, I thought Jalen was awesome. I mean, I thought that he took good shots, he’s a good passer, you saw his ball handling. We just have to continue to work defensively. … Certainly Jalen was a huge bright spot for us offensively.”

Alabama hit three consecutive three-pointers in a 50-second span late in the game to turn its 65-63 lead into a 74-63 edge.

Arkansas struggled from the free-throw line once again, missing both ends of two-shot fouls three times in the first half while going 11 of 18 from the stripe. The Razorbacks finished 15 of 23 (65.2%).

“Our free-throw percentage has got to improve as well,” Coach Eric Musselman said.

Ricky Council went 7 of 9 for Arkansas, while Makhi Mitchell was 4 of 6. Anthony Black, who went 1 for 5 and Mitchell missed both ends of a pair in the first half. Black was also denied a made free throw on a lane violation by Jalen Graham.

Musselman was disturbed by the discrepancy in free throws taken between the teams.

“I can’t recall a home game that I’ve ever coached that an opposing team had 36 free throws attempted,” he said. “I know they had talked about all our free throws last year. This year we’re at home and it happens.

“I mean we take 10 three balls attempted to their 20, so they took twice as many threes as us, and we only got to the line 23 times. … I don’t understand that. If we were taking a lot of three-point shots I would understand it.

“But we’ve got to take better care of the ball, too. I mean we didn’t shoot the ball well, and we had 15 turnovers and gave up nine threes.”

The officiating crew led by Tony Greene stopped the game at the 14:12 mark of the first half to review an after-action moment. After Makhi Mitchell was whistled for a foul on a driving Jahvon Quinerly, the loose ball wound up in the hands of Arkansas’ Anthony Black. Quinerly came up and slapped the ball out of Black’s hands, which Black took exception to, leading to players from both teams bowing up.

After a stoppage of a couple of minutes, the officials assessed double technical fouls on Black and Quinerly, who hit two free throws from the original foul to give Alabama an 11-7 lead.

Tensions flared later in the half when Black and Alabama’s Dom Welch got tangled up on the baseline following Jalen Graham’s go-ahead scoop shot for a 29-28 Arkansas lead, its first since 7-5. The officials reviewed that confrontation but did not assess any fouls.

Forward Makhel Mitchell made his first start of the season, joining twin brother Makhi Mitchell, Jordan Walsh and guards Anthony Black and Davonte Davis as the Razorbacks went to a bigger lineup to contend with Alabama’s height.

It was Coach Eric Musselman’s fifth different starting lineup. Black and Makhi Mitchell are the only Hogs to start all 16 games, while Walsh has started 15 and Davis 11. Ricky Council came off the bench for the first time after starting the first 15 games, spelling Walsh as the sixth man at the 16:24 mark.

Alabama cut Arkansas’ all-time advantage in the series to 36-31 but tied it up at 28-28 since the Razorbacks joined the SEC.

Arkansas fell to 20-7 against Alabama in Fayetteville, while the Crimson Tide are 22-8 in home games.