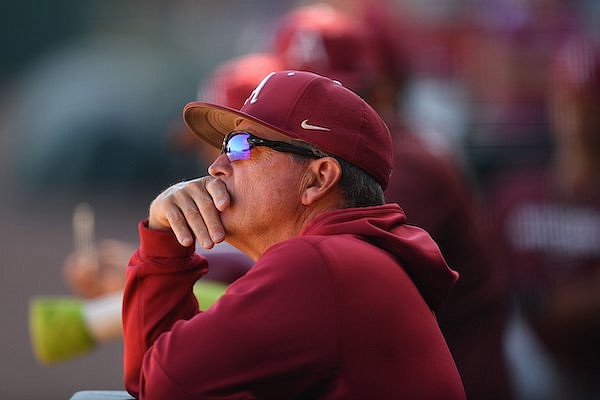 The rings were presented at a team meeting inside the Hunt Baseball Development Center. The players will begin skill work Tuesday as they gear up for the start of team practice Jan. 27.

Arkansas is scheduled to open the season Feb. 17 with a game against Texas at the College Baseball Showdown in Arlington, Texas. The Razorbacks are also scheduled to play TCU and Oklahoma State as part of the three-day event at the Texas Rangers’ 40,300-seat Globe Life Field.

Dave Van Horn, the 21st-year head coach at Arkansas, said earlier this week that several players returned to Fayetteville before it was required.

“Probably more this year than any year, there's more guys back here already than I've ever seen,” Van Horn said Thursday. “And it's probably because we have a lot of new guys. When you think about it, more than half our team is new.”

The Razorbacks have 40 players on their roster, which includes 16 transfers from a Division I or junior college, and 11 true freshmen. A 35-man roster must be set for the regular season, meaning some players will redshirt.

Only 11 Razorbacks — 7 pitchers and 4 position players — return from the 27-man roster at the College World Series last June, when Arkansas made the national semifinals before being eliminated by eventual national champion Ole Miss.

The preseason begins with question marks at shortstop and third base, where Arkansas must replace departed stars Jalen Battles and Cayden Wallace. Leading candidates at third base are freshman Jayson Jones, junior-college transfer Caleb Cali, and Kendall Diggs, a sophomore who was used primarily as a designated hitter last season.

“The left side is still wide open,” Van Horn said. “We’ve got a lot of candidates, so we'll see. I would like it to get locked down. I like starters to know they're starting for the most part, and they don't really have to check that lineup when they're walking in the door.”

Arkansas’ only two returning position starters will man the right side of the infield, but in different positions than where they primarily played a year ago. Peyton Stovall, last year’s every-day first baseman, will replace Golden Glove Award winner Robert Moore at second base, and Brady Slavens returns to first base, where he started most games in 2021.

Slavens played most of last season as a designated hitter due to an elbow injury that limited him defensively. He underwent surgery for ulnar nerve transposition in his right throwing arm during the offseason.

“He's the frontrunner to play every day at first, for the most part,” Van Horn said. “(Stovall) is moving to second and he did a really good job in the fall.”

In the outfield, Jared Wegner (left field), Tavian Josenberger (center) and Jace Bohrofen (right) established themselves as leaders during the fall. The Razorbacks lost all three starting outfielders from last season’s team.

At catcher, Hudson Polk had a slight lead over Parker Rowland as the No. 1 catcher in the fall, but Van Horn said both will play. Polk transferred from Oklahoma, where he was a backup on the national runner-up team last season, and Rowland, who began his career at Arkansas State, arrives after one season at Eastern Oklahoma State College.

“They’re both outstanding people,” Van Horn said. “I really like them. They're both really good leaders. I'd say that Hudson was a little bit ahead of Parker on the defensive side. I think Parker can hit and he throws well.

“They were pretty even early and then I thought that Hudson pulled away from him the second half (of the fall). I think even Parker would tell you that he didn't catch great down the stretch. He was better early. I think he got a little tired. They're both going to get to catch. We don't want to wear our guys out.”

The catchers will work with a talented, veteran pitching staff. Fifth-year Arkansas pitching coach Matt Hobbs said his unit recorded its best fall metrics since he has been part of the program.

“We had a really good fall from a strike-throwing perspective,” Hobbs said. “In the fall, that's kind of what I look at: Are we throwing it over the plate? Are we aggressively attacking the strike zone?

“Being able to throw multiple pitches over the plate is the starting point and the base layer of any pitching staff…and we did a better job of that this fall than we've done since I've been here.”

Right-handers Will McEntire, Jaxon Wiggins and Brady Tygart, and left-handers Hagen Smith and Zack Morris return after establishing themselves as front-line pitchers last season. Austin Ledbetter, a sophomore right-hander, also pitched for the Razorbacks at the College World Series after he was seldom used in the regular season.

All six pitchers will be evaluated as starters this preseason, as will transfers Hunter Hollan, a left-hander from San Jacinto College, and right-hander Cody Adcock, who pitched last season at Crowder (Mo.) College after spending a year at Ole Miss.

Right-handed transfer Koty Frank had starting experience at Nebraska, but might factor more into the Razorbacks’ bullpen plans in a role similar to departed relievers Kole Ramage and Zebulon Vermillion, who pitched in 31 and 24 games, respectively, last season.

“The chunk of six with Wiggins, Smith, McEntire, Adcock, Hollan and Tygart, that’s a good chunk to start with,” Hobbs said. “There’s six, and then add the other three guys to get to nine potentially.

“You can’t talk about starting pitching and not talk about Will McEntire because of what he did last year. Hagen and Jaxon, those guys started 14 games apiece last year, and Hagen had the start in Omaha against Ole Miss that was unbelievable — five innings, eight strikeouts against the eventual national champion and an old lineup.”

Tygart was Arkansas’ top closer last season before he and Smith split back-end duties late. Tygart had eight saves and Smith recorded two saves, both in the postseason.

The next two weeks will be an important evaluation period for pitchers, Hobbs said, because of how long players worked on their own during the university’s winter break.

“This month for me is probably the most stressful from an injury perspective that you run into,” Hobbs said, “because we think they're somewhere, and if we don't do a good job of evaluating where they actually are and put too much load on them, you could run into some serious problems about three weeks from now.”

Van Horn said Hobbs will have a highly structured plan for pitchers before the start of scrimmages on Jan. 27.

Van Horn said skill work the next two weeks will mostly include group work for infielders, outfielders, catchers and pitchers, but the team might come together for a short amount of time to work on areas of the game like cutoffs and relays.