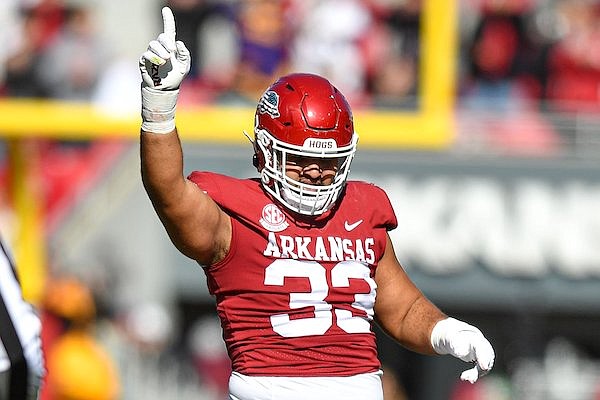 Arkansas defensive lineman Isaiah Nichols celebrates a tackle during a game against LSU on Saturday, Nov. 12, 2022, in Fayetteville.

FAYETTEVILLE — A pair of former Arkansas players will transfer to play Big Ten football at Purdue.

Defensive tackle Isaiah Nichols announced he had committed to the Boilermakers on Tuesday. Defensive back Anthony Brown said he would transfer to Purdue last week.

Nichols is expected to have one season of eligibility remaining. He retained a redshirt by playing three games in 2018 and was given an extra year of eligibility due to the 2020 season disrupted by covid-19 protocols.

A graduate of Springdale High School, Nichols started all 12 games for the Razorbacks during the 2022 season and recorded 16 tackles, 1 tackle for loss and 2 quarterback hurries. He started 22 games over three seasons.

Brown, a native of Milan, Tenn., redshirted his freshman season with the Razorbacks and has four seasons of eligibility remaining.

Purdue hired Ryan Walters as its head coach after Jeff Brohm left for Louisville following the regular season. Walters is a protege of former Arkansas defensive coordinator Barry Odom, who he worked alongside at Memphis and Missouri.

Here is a look at the Razorbacks who have entered the portal since the beginning of pre-season practice in August: