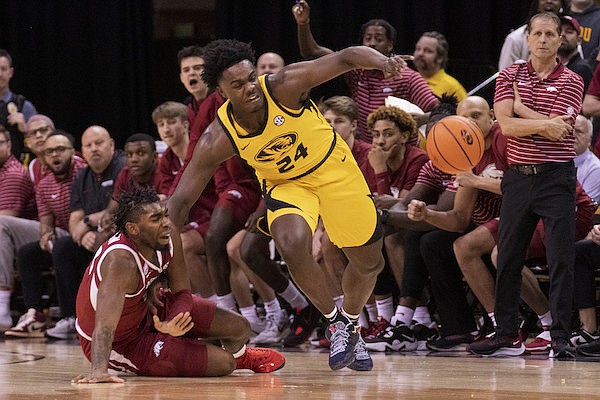 Turnovers played a huge role as the University of Arkansas dropped its fourth consecutive game in a 79-76 loss to Missouri on Wednesday night.

The No. 25 Razorbacks committed a season-high 21 turnovers, including 14 in the first half, as Missouri’s swarming defense caused Arkansas trouble.

The Tigers enjoyed an 18-2 edge on points off turnovers in the first 20 minutes and finished the game with a 31-13 edge in that category.

Davonte Davis led the Hogs with six turnovers, while Anthony Black added five. Davis’ final turnover was an offensive foul with 43 seconds left as he drove into the lane.

Arkansas has had double-figure turnovers in its last eight games since committing nine in an 88-78 win over Oklahoma.

Missouri took the first seven free throws of the game, and made five of them, but Arkansas reversed that trend.

The Razorbacks took the next 12 free throws and made 11 of them to grab a 25-22 advantage.

Arkansas finished 23 of 26 at the line for a season-best 88.5% shooting. Anthony Black led the way with a 6-for-6 night from the line, while Makhi Mitchell went 5 for 6.

Tony Greene took a long look at a collision between D’Moi Hodge and Anthony Black at the 8:48 mark with Arkansas leading 55-49.

Hodge was running into the lane when Black put a hand up, then Hodge pushed his elbow into Black’s face. After a long delay, the officials decided Black committed a common foul and Hodge a Flagrant 1 foul.

Hodge made two free throws for the Tigers and Ricky Council put in two for the Hogs to make the score 57-51.

Later, with 2:02, Greene and company took a long look at a foul by Davonte Davis in the lane. Then with 43.7 seconds left in a tie game, they checked the monitor again to review a player-control foul on Davis drawn by the Tigers.

Ricky Council rocked the rim early in the game as the Tigers lost him in transition.

Davonte Davis got up the floor quickly after rebounding a missed three-point shot from Kobe Brown. Just after he crossed halfcourt, Davis spied Council alone on the left wing. Council immediately dribbled hard into the lane, charging in for a one-hand slam to give Arkansas a 9-2 lead.

Missouri’s Mohamed Diarra had been 0 for 2 from three-point range before burying one from Kobe Brown in the left corner to pull the Tigers within 9-5 at the 12:47 mark in the first half.

On the other end 22 seconds later, Arkansas got a rare three-pointer from freshman Jordan Walsh to restore the Razorbacks’ seven-point lead.

Walsh had been 1 of 17 on three-point tries in SEC play prior to that, with his only other make coming in a 1-of-8 effort from behind the arc in a loss at LSU in the conference opener.

Missouri fans stand until the team hits its first field goal, and this time they were on their feet for a while.

The Tigers missed their first seven shots to open the game and fell behind 7-0 before Kobe Brown put in a short bank shot off the right block at the 14:59 mark, more than five minutes into the game.

Arkansas had its own lapse of shooting midway through the opening half with a field goal drought that lasted 5:42.

After the Hogs took a 12-5 lead on a Jordan Walsh three-pointer, they took only one shot during that 5:42 span, a missed three-pointer from Joseph Pinion.

The Razorbacks did make 5 of 6 free throws before Derrian Ford snapped the lull with a short jumper in a crowded lane to give Arkansas a 19-18 lead.

Arkansas’ Trevon Brazile, who suffered a season-ending knee injury on Dec. 6 against North Carolina-Greensboro, was back in Mizzou Arena.

Brazile, who played at Missouri last season, tore the anterior cruciate ligament in his right knee in the ninth game and underwent surgery in late December. He traveled with the team to Columbia, Mo., and sat on the bench.

Freshman Nick Smith, who missed his seventh consecutive game and 13th of the season with a knee injury, did not make the trip.

Black and Mitchell have started all 18 games, Council has started 17, Davis 13 and Johnson 2.

Missouri forward Noah Carter didn’t dress out due to health and safety concerns, according to a pregame announcement.

• Missouri scored just six points in the opening 10:30 of the game, but closed it out with 26 points in the final 6:48 to overcome a 10-point deficit.

• The Missouri football team took the floor during the first media timeout along with the Battle Line Rivalry trophy to show to the home fans at Mizzou Arena after the Tigers claimed the prize with a 29-27 win over Arkansas in November.

• Anthony Black was clearly smarting on his right wrist or thumb but he appeared to avoid a major injury after getting hacked by Isiaih Mosley while running into another Tiger with 4:55 left in the first half. Black made a pair of free throws after the foul to give Arkansas a 23-22 lead.