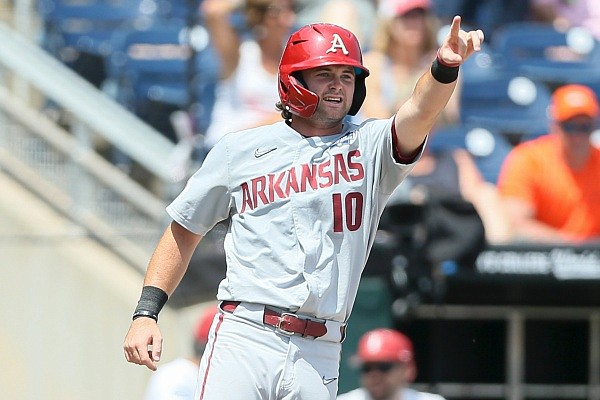 FAYETTEVILLE — In a close vote that revealed several team leaders, three Arkansas baseball players were named captains for the 2023 season.

Redshirt junior pitcher Zack Morris, redshirt sophomore outfielder Jace Bohrofen and sophomore second baseman Peyton Stovall all earned the honor for the first time. The Razorbacks’ number of captains fluctuates from year to year, but is typically capped at two or three.

“I could have taken five captains, it was so close,” Arkansas coach Dave Van Horn said. “You know, everybody had 20 votes, 19 votes — there were like six or seven (of them), and I mean even a couple of new guys. It was pretty cool to see.”

The vote for captains came during an offseason that saw the Razorbacks’ 40-man roster grow close. The team’s camaraderie was an exciting development for Van Horn, who said prior to fall practice that team building would be a critical aspect to fall practice because of so many newcomers on the team. Arkansas has 27 new players this season — 16 transfers from Division I programs or junior colleges, and 11 freshmen.

The team has bonded over extracurricular activities this offseason such as ping-pong, hunting and attending other sporting events.

“This team loves each other,” Van Horn said.

Morris, who grew up in Cabot, called being a captain of his home-state team “a real honor.” The left-hander went 6-1 with a 2.31 ERA in 22 appearances last season, and recorded his only save when he stranded the bases loaded in the ninth inning of a 3-2 victory over Ole Miss at the College World Series.

“To be called a team captain on this team, that is something that I feel like every Arkansan that wants to be a Hog would dream about,” Morris said. “That’s kind of how I feel in this situation — like it’s a true, true honor for my teammates to think of me in such a way. I was happy whenever it happened, but at the same time it’s like, hey, these guys look up to me as  leader on this team and I feel like I can…help these guys on the field.”

Stovall is Arkansas’ second sophomore captain in as many seasons. Departed third baseman Cayden Wallace was a captain for last year’s team that had a 46-21 record and was a national semifinalist. Stovall started 51 games as a first baseman last season and finished the year with a .295 batting average, 6 home runs, 8 doubles and 31 RBI.

“Just being young, you know, these guys think that I have the qualities of captain, which is awesome,” Stovall said. “And that's a huge honor, especially when you hang out with these guys every day, and they get to know you."

“I couldn't be more grateful and blessed to be in a situation to be voted by them to be a captain.”

Bohrofen, who along with Stovall is one of four returning position players, said the vote was special to him because he was not an every-day player last season. Bohrofen started slow last year, but was beginning to heat up when his season was derailed by a March shoulder injury that relegated him to mostly a back-up role. He batted .228 with 3 home runs, 8 doubles, 1 triple and 17 RBI in 32 games, including 24 starts.

“I didn’t have the greatest season ever, but I think that kind of just speaks to my character as a teammate and as a person on that team,” Bohrofen said.

“It means a lot. It means your teammates respect you and think a lot of you, and I feel like you can be a leader to lead them into a regional, super regional, even Omaha.”

Arkansas players reported back to Fayetteville last week and began skill work this week. The Razorbacks are scheduled to begin team practice next Friday — three weeks before their scheduled season opener against Texas on Feb. 17 at the College Baseball Showdown in Arlington, Texas.