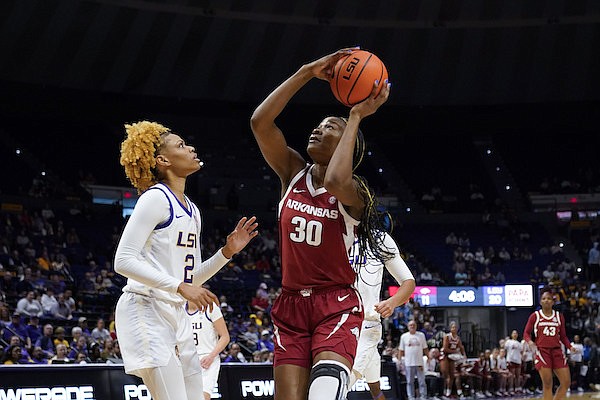 On Dec. 29, the University of Arkansas women’s basketball team suffered a 24-point blowout loss to LSU inside Walton Arena.

“I hate that we lost, don't get me wrong, but I'm glad that we battled more than we did the last time we played them, just 21 days ago,” Arkansas Coach Mike Neighbors said. “Again, we're not talking about two months, we're talking about 21 days.”

It was a resilient effort from Arkansas, which had five more points than the Tigers in the second half and led by as many as three in the fourth quarter.

“A lot to be positive on,” Neighbors said. “But in our league, you know, it’s one possession here and one possession there that will keep you awake on the plane and when you get home. I know everybody will find one or two things they think they could have done better and then collectively it makes up the difference.”

LSU (19-0, 7-0) was carried by stellar play from forward Angel Reese, who is a frontrunner for national player of the year awards. The 6-foot-3 sophomore transfer from Maryland had an impressive 30-point, 19-rebound night.

Reese set the tone immediately. She scored a layup after grabbing her own miss just nine seconds into the game. Jasmine Carson followed with a three-pointer less than 20 seconds later, and a Reese jumper forced Arkansas Coach Mike Neighbors to call a timeout 59 seconds into the game with LSU ahead 7-0.

Chrissy Carr got Arkansas on the board quickly out of the timeout with her first three, but the Tigers responded with seven straight points to go ahead 14-3.

LSU led by 12 points in the second quarter, but layups from Barnum and Samara Spencer in the final 44 seconds of the half cut the Tigers' lead to 38-30 at halftime.

Reese scored the third quarter’s first basket, but Arkansas showed poise to go on three different runs of at least 4-0 to keep the energetic announced crowd of 7,298 at bay.

The Razorbacks scored 27 points in the third quarter, including seven of Barnum’s team-high 20 points.  Reese hit a pair of free throws with 29 seconds in the quarter to give LSU a 61-57 lead entering the fourth.

A deep three-pointer from Makayla Daniels with 6:23 left broke a tie and gave Arkansas its first lead at 69-66. Alexis Morris answered with a three of her own, but Daniels countered again from deep. The 72-69 lead was the largest Arkansas had for the game’s remainder.

Reese had five more points in the tank, and 4 of 4 shooting from the foul line by freshman Flau’jae Johnson was clutch for LSU, which outscored Arkansas 10-4 down the stretch. Barnum tried to give the Razorbacks a one-point lead via a three-point attempt with 24 seconds left, but missed.

“I'm not going to be too hard on ourselves, because again, I think LSU is one of the best teams in the country and we're just not far off,” Neighbors said.

The loss moved Arkansas to 8-17 all-time when playing in Baton Rouge, La.  Tigers coach Kim Mulkey evened her record to 2-2 against Neighbors-coached teams, with both wins coming this season.

LSU remained one of three NCAA Division I team to remain undefeated. The 7-0 start to conference play is LSU’s first since 2007-08.

Arkansas next plays Sunday at 2 p.m. Central at top-ranked South Carolina, which is also unbeaten. It will mark the first time in program history the Razorbacks have faced top-three teams in consecutive games.