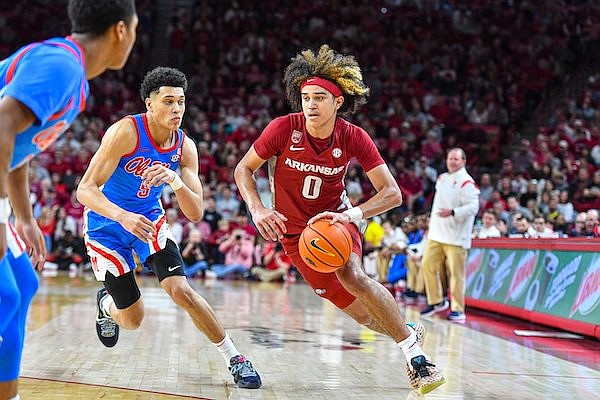 Arkansas guard Anthony Black (0) dribbles during a game against Ole Miss on Saturday, Jan. 21, 2023, in Fayetteville.

FAYETTEVILLE — Arkansas is in the win column in Southeastern Conference play for the first time in two-and-a-half weeks.

The No. 25 Razorbacks snapped a four-game losing streak with a 69-57 victory over Ole Miss on Saturday at Bud Walton Arena. Arkansas improved to 13-6 overall and 2-5 in the SEC.

It is the Razorbacks’ first win since defeating Missouri 74-68 at home on Jan. 4.

"I mean, we’re happy," Arkansas coach Eric Musselman said. "We’ll have a good dinner tonight with family and friends. It’s a little bit better than the alternative. I think our whole team really responded in the second half.

"I thought in the first half we weren’t making shots. Maybe the flow wasn’t what we wanted offensively, but I thought in the second half defensively holding Ole Miss to 37%, defensive activity with steals, we were kind of doing what we do, which is create offense through our defense."

With 5:15 left in a largely lackluster first half, Rebels forward Jayveous McKinnis added a dunk to give Ole Miss a 25-24 lead. Following a 2:16 stretch in which neither team scored, Arkansas freshman Joseph Pinion ended the drought in a big way.

The Morrilton native scored the Razorbacks’ final eight points over the last 2:59 of the half. The first of Pinion’s scores was a layup after picking up a loose ball from guard Ricky Council.

Pinion then knocked down a pair of left-corner three-pointers to put Arkansas ahead by as many as five points. The Razorbacks led 32-29 at halftime.

And they largely owned the second half.

Arkansas, after missing 4 of its first 5 shots after halftime, went on to make 8 of 12 field goal attempts over a 7:42 stretch. During that time, the Razorbacks extended a three-point lead to 55-39 after a layup from Pinion.

"This was the first game that showed that this is who Arkansas is and we’re going to be like this for a while," freshman Jordan Walsh said.

Freshman guard Anthony Black kicked off the run with back-to-back scores around the rim that led Musselman to turn around and attempt to fire up the home crowd. Junior guard Davonte Davis then made a three and Black capped a 9-0 run with a dunk.

The Razorbacks were solid defensively in the second half. Ole Miss began the period with 4 turnovers and 1 missed shot on its opening 4 possessions.

The Rebels went through a second-half rough patch in which they missed 12 of 15 shots, but they battled back to within 10 with 59 seconds to play. Walsh knocked down a right-corner three that gave Arkansas its largest lead at 63-42 with 6:16 left.

The Razorbacks were led by Black, who finished with 17 points, 8 assists and 5 steals in 37 minutes. Davis added 16 points, 5 rebounds and 4 assists, and Walsh and Pinion each had 13 points.

"You're seeing growth in his game on both sides of the ball," Musselman said of Black. "There are not many freshmen that are going to have 17, 8 and 5 steals. I mean, five steals to me is as impressive as anything he did tonight."

Arkansas made 8 of 20 three-point attempts and shot 45.6% overall. Davis and Pinion each made 3 threes and Walsh hit a pair.

McKinnis and Daeshun Ruffin had 10 points each for Ole Miss. Rebels leading scorer Matthew Murrell finished with 3 points on 1 of 5 shooting before leaving the game with an injury with 14:13 remaining.

"He’s the star player," said Davis, who defended Murrell much of the game. "We try to do whatever it takes to not let him score. No matter what team we’re playing against, we don’t want the star player to score at all.

The Razorbacks return to Bud Walton Arena on Tuesday when they host LSU. Tipoff is set for 6 p.m. on ESPN2.