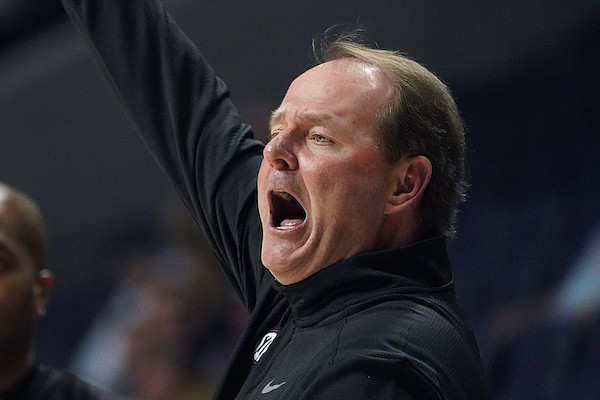 One night earlier, the Ole Miss Rebels definitely improved their competitiveness and confidence. Most importantly Ole Miss gained something the 12-6 Razorbacks never had even when Arkansas surged 11-1 nonconference.

“‘We needed a road win,” Davis said. “I was proud of our players. They deserved it.”

The Rebels likely believe one road win can lead to another visiting Walton Arena for today’s 11 a.m. ESPN2 televised game against Arkansas. Both teams are 1-5 in SEC play.

“I give Kermit’s team a lot of credit,” Arkansas Coach Eric Musselman said. “They won a game on the road at South Carolina. They really competed. Kermit’s teams always play extremely hard. I’m sure they’re feeling good especially coming off of a road win.”

Hard to know what Musselman’s Razorbacks feel other than frustrated.

Though fashioning an 11-1 non-conference slate so impressive still for Arkansas remaining in the AP’s top 25, the Razorbacks played only neutral-site and home games until an SEC-opening ambush at LSU. Other SEC road games were 13-point losses at Auburn and Vanderbilt.

They lost a 10-point lead and four Hogs fouled out in the final 5:07 of Wednesday’s 79-76 rematch loss at Missouri.

Even a raucously full house Walton Arena Jan. 11 crowd couldn’t save Arkansas from an 84-69 thumping by No. 4 Alabama, which scored 51 second-half points.

“I’ve coached a lot of games and can’t remember a defensive team giving up 63 points in a half,” Musselman said at Vandy. “The competitive nature slipped. This is a struggling, young ball club. It lacks confidence right now.”

Losing Trevon Brazile, their most versatile big man, to a season-ending knee injury in the final non-conference game while nationally heralded freshman Nick Smith remains indefinitely sidelined by injury obviously affects. But Wednesday before a hostile Mizzou Arena crowd the Hogs fought on even with Mizzou attempting 40 free throws.

“I just have never coached in a game where four players fouled out and the opposition shoots 40 free throws,” Musselman said. “That’s 36 free throws (attempted by Vandy) and then 40. We haven’t caught any breaks.”

The SEC on Thursday admitted an officiating error that fouled out Arkansas guard Devo Davis in Columbia, Mo., when actually Davis was fouled and should have attempted free throws.

However outscored 31-13 on points off their 21 turnovers most broke Arkansas most despite outrebounding Mizzou 42-23 and playing hard throughout.

“I thought our competitive nature was at a high level,” Musselman said. “We’re just a basketball team right now that doesn’t know how to win.”

Imagine Kermit Davis thought the same about his Rebels until they figured it out at South Carolina.