Diamond Hogs gearing up for start of team practice 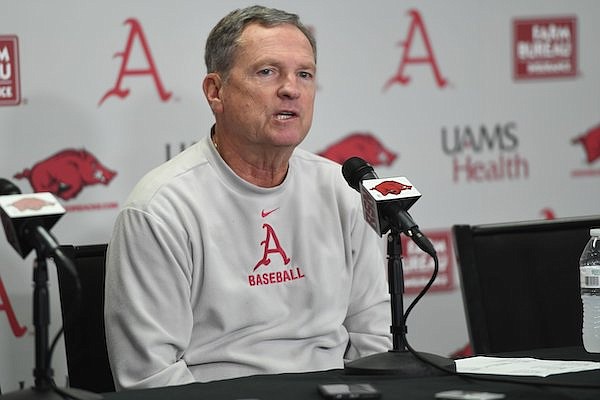 FAYETTEVILLE — The pitching-heavy Arkansas Razorbacks will open preseason practices on Friday three weeks in advance of their season opener Feb. 17 against Texas in the College Baseball Showdown at Globe Life Field in Arlington, Texas.

The University of Arkansas will be aiming for a sixth consecutive completed season of 45-plus wins under 21st-year Coach Dave Van Horn, and a fourth College World Series visit in the last five chances.

Van Horn and team captains Jace Bohrofen and Peyton Stovall addressed the looming season on Friday in a media session at Baum-Walker Stadium that did not include third captain Zack Morris, who was in class.

The trio felt Arkansas, ranked No. 7 by Collegiate Baseball and No. 8 by Baseball America and D1Baseball.com in preseason polls, will have no shortage of capable arms for the starting rotation and the bullpen.

“Right now, it’s the best I’ve ever had,” Van Horn said when asked about the pitching depth. “Is that honest enough for you? That’s the way I feel about it. I mean, we’ve got depth. But what you see on paper, we’ve got to get it done on the field.”

“I think our pitching is extremely, extremely deep,” said Stovall, who is switching from first base to second base after hitting .295 with 6 home runs and 31 RBI as a freshman. “We have guys like Hagen and Cody [Adcock] and Hunter [Hollan] and Wiggins. … All those guys can start … so we’re going to have options to choose from.

“You have guys like Will who are coming back, who pitched phenomenal for us in the postseason and late in the stretch last year.”

Bohrofen, a junior who battled a shoulder injury last year, called Wiggins “virtually unhittable” during fall ball and riffed off the pitchers named by Stovall.

“They could be starters, they could be relievers, they could be closers,” Bohrofen said. “I’m not even sure they know what they want to be yet. And so, that just kind of talks about how deep and good they are because they all have talent and have good stuff.

“But like Peyton said, there’s only three spots on the weekend. Whoever gets those spots, we all know they’re going to go out there and pitch their best, and we believe in them.”

The Razorbacks have multiple starting spots up for grabs after losing third baseman Cayden Wallace, catcher Michael Turner, the middle-infield combo of Jalen Battles and Robert Moore, and outfielders Chris Lanzilli (who hit a team-high .326), Braydon Webb and Zack Gregory.

Slavens has had elbow and ankle injuries the last two seasons but he’s back and primed to play first base.

“We’re excited about having Brady back,” Van Horn said. “I think he’s just got a different mindset. I think he’s in really good shape. Arm’s fine. He’s throwing 100%. Probably better than he ever has honestly. He’s fielded the ball real well so far in our drills.”

Van Horn said the left-handed hitting Slavens hit an opposite-field home run that would have traveled more than 400 feet based on TrackMan data, in the Fowler Center during drill work on Thursday.

Bohrofen, who has moved to right field, and newcomers Tavian Josenberger and Jared Wegner are favored to win starting positions in the outfield, with Mason Neville also in the mix.

The Razorbacks have three position battles that could last through the preseason at shortstop, third base and catcher.

Newcomers John Bolton, a graduate transfer from Austin Peay, and Harold Coll, a junior from San Jacinto College, are vying for playing time at shortstop to replace the defensive whiz Battles, who also provided 10 home runs and 45 RBI last year.

“Both of our shortstops have played a lot of baseball,” Van Horn said. “Harold Coll … played a lot of short and second last year, probably brings the bigger bat to shortstop, but does he bring the most consistency? In the fall, he wasn’t. I just felt like Bolton was ahead of him.”

At third base, returning sophomore Kendall Diggs (.195, 3, 14), junior transfer Caleb Cali and freshman Jayson Jones are all in the mix. Van Horn said Jones hit the hardest ball during the fall, a home run on a 3-0 count that had a 117 mph exit velocity.

“I feel like Jayson can play a lot and can help us a lot. I think he has a bright future. He’s got a lot of power.”

Newcomers Hudson Polk and Parker Rowland are battling to win the job at catcher.

Polk transferred from Oklahoma and Rowland from Eastern Oklahoma State.

“Hudson Polk … I thought he had a really good fall,” Van Horn said. “He was the most consistent catcher as far as the defensive side. He actually got better as fall went on.

“I thought that Parker Rowland was really good early, and then I think he got tired a little bit. … Didn’t catch quite as good, but he hit pretty much all fall, and he’s a switch hitter. But those are the two guys.

“Those are the guys that are going to log the innings and get it done for us back there. I just feel like that someone will be the No. 1 guy. If you’re going off of fall ball, it’s Polk. But I feel like the other catcher’s right on his tail. … It’ll be a good one-two punch.”

Josenberger, a transfer from Kansas, is a switch-hitter and center fielder who has shown team-leading skills.

“The crazy thing about that voting is that there was three or four other guys that were right there,” he said. “A couple of them were transfers, so they like each other a little bit, and they respect each other already, so that’s really good to see.”

After opening the season against Texas, TCU and Oklahoma State in Arlington, the Razorbacks return home for 18 consecutive games, including the SEC-opening series against fellow-CWS participant Auburn (March 17-19). The following weekend the Hogs hit the road for a series at LSU, the preseason No. 1 team by Collegiate Baseball, beginning on March 24.