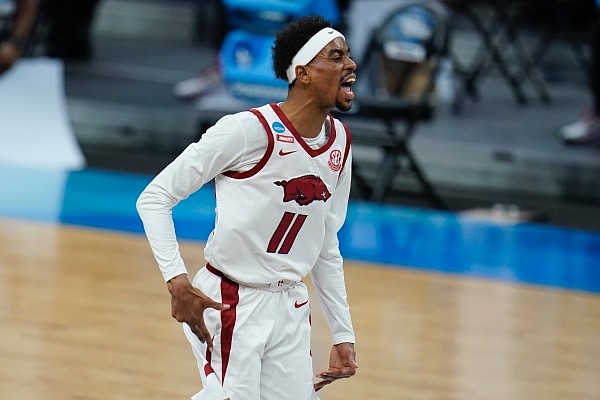 The third in a nine-part series reviewing Arkansas basketball in 2020-21.

• Creativity offensively. Your primary ballhandler must be engaged on the offensive end on a nightly basis. If that happens, the team’s chance of winning or hanging around is much greater than if he’s not. Jalen Tate, for a vast majority of the season, was very in-tuned with Arkansas’ plan. He was arguably the most important ingredient to the Razorbacks finding success offensively because he initiated offense more often than not. Tate ran away with the team lead in potential assists, which shouldn’t be a surprise. You expect that from your lead guard. He finished with 201 from the start of SEC play through the end of the season. Davonte Davis was second with 114.

Tate, too, struck a nice balance in passes that found teammates for shot opportunities. Those he shared the floor with shot 64 of 108 (59.3%) on two-point looks he created, but knocked down the three-ball at a much lower rate than I expected — 22 of 93 (23.7%). He recorded 10 or more potential assists in a game eight times after Dec. 30, including 15 twice at Auburn and vs. Georgia. Tate actually had 13 potential assists in the home loss to Missouri, but he totaled only one assist for the game, which says a lot about Arkansas’ struggles shooting the ball as a team that day.

For the season, he had an assist rate of 22.2%, according to KenPom, and his 22.9% assist rate in SEC play ranked No. 8. Tate finished with four-plus assists — roughly his season average — in 17 games. The Razorbacks were a much better team in terms of valuing the basketball with him on the floor. According to HoopLens analytics, Arkansas’ team turnover rate was 15.4% when he was in the lineup and 19.2% when he sat.

• Underrated scorer in the lane and at the rim. This isn’t a knock on Tate’s game whatsoever, but there isn’t much flash to it. He’s just a steady player on most nights. And what he was great at — putting the ball on the floor and getting to his spots on the interior — doesn’t draw many oohs and ahhs from the crowd. His high-arching midrange jumpers that often went as high as the shot clock did, though, on occasion, and for good reason.

According to shot chart data collected throughout the season, Tate finished second on the team behind Justin Smith in scores in the lane with 85. If that comes off as surprising, it shouldn’t. Tate was a bit unorthodox on the offensive end and even herky-jerky when working himself into position to score, but he was effective, especially at the rim and in the short midrange areas of the floor. I found his footwork in the lane to be kind of uncommon and awkward at times, but those untraditional ways he scored made his game unique. He tallied at least one score in the lane in all but six games, three of which came against LSU.

• Pesky and mean defender. When Tate arrived at Arkansas, there was a lot of talk about his play defensively. He was recognized as the top defensive player in the Horizon League multiple times, but of course there were questions about how that would translate in the SEC and on a more national scale. Those notions, I thought, were put to rest fairly early in his time with the Razorbacks. Through three games, he had allowed only one score on 10 field goal attempts when he was the nearest defender, and through six games opponents were 7 of 29, including 3 of 18 inside the arc.

Beginning with Game 1 he was assigned the opposing team’s top guard or leading scorer. Eric Musselman trusted Tate’s natural instincts on that end and his veteran savvy, and he was arguably Arkansas’ most trusted defender on the perimeter until the emergence of Davis. The two then had to fight for the right to take on the opponent’s top scoring threat. That’s a great thing to have to have happen.

He had his off nights here and there, but what defender doesn’t. Tate always, though, made guards shoot over a long, extended arm. At 6-6, he featured great length, and his 35-inch vertical, according to the Razorbacks’ game notes, aided him multiple times as well, especially on his big-time block at Missouri, which helped preserve Arkansas’ SEC winning streak. Tate recorded at least one steal in 19 of the first 22 games, and his defense, in part, keyed the team’s turnaround in late January. He had 17 steals over a seven-game conference stretch from Jan. 20-Feb. 16.

• Wasn’t afraid to take big shots. Sharing the floor with two freshmen on the perimeter and a pair of forwards whose jumpshots had proven to be a bit shaky, Tate took the ball with less than 2:30 to play at home against Florida and delivered a gut punch to the Gators in crunch time. He used a high ballscreen from Jaylin Williams, got the mismatch he wanted and in rhythm knocked down a big-time jumper to seal the win. It’s a play that stands out to me with Tate. It exuded confidence in his ability to get to an area of the floor where he was comfortable and dangerous.

And we can’t forget his play down the stretch in the Sweet 16. It was another run in which Tate brilliantly got to his spots and exploited mismatches. In the final 5:01 against Oral Roberts, he was 4 of 4 from the floor, and each bucket gave the Razorbacks the lead. He added three layups — one off a cut, one off a postup and one on a drive — and a short midrange jumper over the smaller Max Abmas. Musselman had no qualms about going to Tate in those moments. He trusted his veteran guard wholeheartedly, and Tate delivered. That will be a clutch performance that is talked about for years to come.

• Turnover issues. Early in the season, there were many who weren’t sold on Tate as Arkansas’ lead guard because of some careless miscues, and they wanted freshman guard KK Robinson to assume more responsibility at the position. Tate’s first five-turnover game came seven games into the season vs. Oral Roberts, then he had four more against a scrappy and chaotic Abilene Christian defense that led the country in defensive turnover rate. He later matched a career-high with six turnovers at Tennessee and had a three-game stretch in which he had 15 turnovers vs. LSU, Alabama and Auburn. Musselman called out his point guards for their poor play after the ugly loss in Baton Rouge. Tate needed to be better and get back to creating efficient offense.

Following that run of games, Tate regrouped a bit and finished with more assists than turnovers in nine of 17 games. He did not have more than four miscues in a game from Jan. 23 through the Sweet 16. Tate finished with six in the loss to Baylor. His ballhandling directly impacted Arkansas’ team success. In five of the Razorbacks’ seven losses, he had at least four turnovers, including six on three occasions. For the season he had a turnover rate of 23.3%, the highest mark of his career.

• Found himself in foul trouble quite a bit. There is a downside to being an in-your-face defender who likes to disrupt an offensive player’s freedom of movement and rhythm, and it bit Tate several times during the season. He picked up at least four fouls in 13 games and fouled out of three, including vs. Missouri in Bud Walton Arena, a game in which Arkansas could have used a seasoned guard to rally the team.

It was a bit of a conundrum, because coaches wanted Tate to be Tate on the defensive end, so they allowed him to be aggressive. But if he went a bit overboard and wound up in foul trouble it then threw off the dynamic of the Razorbacks’ lineups to a degree. He committed 4.1 fouls per 40 minutes played, according to KenPom, the highest mark on the team among regulars outside of Williams (4.8).

• Disappeared offensively for stretches. Tate stepped up in a big way in the NCAA Tournament in terms of scoring, averaging 15 points per game. He was named to the All-South Region team after the Razorbacks were eliminated in the Elite Eight. His scoring tear was all the more impressive not only because he hit some huge shots and played sound offensively for the most part, but because he was coming off a five-game stretch in which he scored four or fewer points four times. His offense, at least scoring-wise, could wane from time to time.

In Arkansas’ seven losses, he averaged 8.3 points on 43.8% shooting, down from 11.7 and 49.1% in the 25 wins. Tate did not reach double figures in scoring in four of the losses, and in the other three he finished with six turnovers. When he was on offensively, the Razorbacks were tough to beat.

Best Tate quote: “This team will never be forgotten, man. This group has done a lot for this program and the culture of this program. I think Year 2 with this coaching staff, man, it puts you on a jump start in the right direction.” — Tate after the Razorbacks’ loss to Baylor in the Elite Eight

Best quote on Tate: “Jalen Tate does stuff that probably is not going to show up in the box score.” — Eric Musselman after Arkansas’ win over North Texas