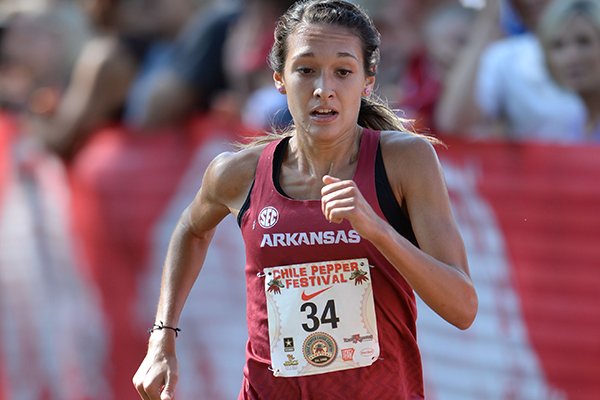 “Taylor was a major contributor to all three team titles that we won,” Razorbacks Coach Lance Harter said. “She just did a fantastic job.”

Werner, a two-time SEC individual champion on the track who was part of 10 conference-winning teams in cross country and track and field, has run her last race as a Razorback.

On Monday, Werner, 22, announced she has signed a professional contract with Puma and will bypass her remaining eligibility at Arkansas, which included one indoor season and two outdoor seasons.

“Puma has made her a great offer and it’s a great opportunity for her to go and join the pro ranks,” Harter said. “Obviously, we’ll miss her a lot, but I think it was just too good of an opportunity to pass up.

“She’s excited about the opportunity and hopefully the dreams she still has to realize in our sport are on her horizon.”

Werner, a two-time NCAA runner-up who came to Arkansas from Ste. Genevieve, Mo., is now training in North Carolina with Puma’s distance runners.

“For me, going to Arkansas, I was all about the team,” Werner said in a news release. “So to end on three national championships, team-wise, that meant more to me than anything I have ever done.

“Yeah, would I liked to have won individual titles? Of course. But I think winning a team title is so much more special. You can have multiple individual winners. You only get one team, and to do that three times – that’s insane.”

Without Taylor, Arkansas is still ranked No. 1 in the coaches’ poll. The distance group is now led by All-Americans Lauren Gregory and Katie Izzo.

“Taylor has been one of our leaders for a couple of years,” Harter said. “She just kind of set a standard through example and she was a great teammate. She did a fantastic job of taking the reins of the distance crew and leading them to team championships.

“I think Lauren and Katie — and there’s others — are going to have to fill that void.”